UN's Only Value is as A Spy Nest

Rachel Marsden
|
Posted: Sep 20, 2017 12:01 AM
Share   Tweet
The opinions expressed by columnists are their own and do not necessarily represent the views of Townhall.com. 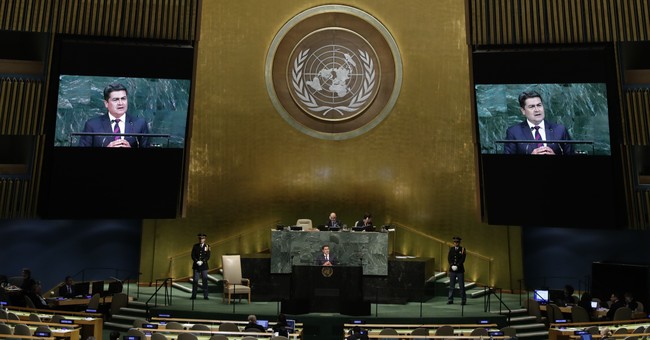 Trying to reform the United Nations is like dating someone with the hope that they'll change. The U.N. won't change. But that doesn't mean you should dump it when there's an opportunity to exploit it.

Everyone with half a brain knows that the U.N. is a useless bureaucracy. On the surface, it has a nifty list of do-goodism that includes everything from climate change to global health care. None of these problems are ever solved (if they're even solvable), but they perpetuate the existence of the U.N. itself. No one in their right mind would look to the U.N. to actually solve critical world problems. Even when it comes to the most egregious global threats -- such as North Korean dictator Kim Jong Un launching missiles and bragging about nukes -- the U.N. Security Council (a group whose members inherently distrust each other) would have to unanimously approve an intervention.

There's only one area where the United Nations has proved valuable to its member states: as a spy nest. What better cover for espionage than a humanitarian cover that also confers diplomatic immunity?

As for those "donated" 8,000 troops, they aren't a sacrifice by China, but rather an opportunity to learn best practices from other countries' soldiers and trainers who are also involved in U.N. deployments. According to the latest U.N. stats, there are more than 112,000 people serving in 16 peacekeeping operations around the world, 80,000 of whom are soldiers. Each of those peacekeeping missions provides precious ground truth: access to political and economic information under humanitarian pretext that would be difficult to obtain in another context.

Former NSA contractor and CIA employee turned whistleblower Edward Snowden said that working covertly at the U.S. Mission to international organizations was like being in a candy store of espionage.

"The reason that made Switzerland so interesting as the capital of espionage -- especially Geneva -- has not changed, Snowden said in 2015. "There have always been international headquarters, the United Nations, WTO, WHO, ICRC. There are representations of foreign governments, embassies, international organizations, NGOs ... A number of organizations, and all of them are in one city!"

U.N. headquarters in New York City isn't any less of a spy nest. It's a place to collect information and to recruit or subvert potential assets. Let's be clear: No nations are above exploiting such a perfect opportunity. To do so would be negligent, given that everyone else is playing the same game.

When a Russian spy ring was rolled up in New York in 2015, for example, one alleged member was a diplomatic attache at Russia's mission at the U.N., according to the FBI. He was afforded diplomatic immunity and deported.

The U.S. has also benefited from the access to information and sources (not to mention the cover) that the U.N. provides.

In his book "Breaking With Moscow," Soviet diplomat Arkady Shevchenko detailed how he spied for the U.S. and then defected from the Soviet Union while serving as undersecretary general of the U.N.

A U.S. State Department cable from 2009 that was later published by WikiLeaks briefed U.S. diplomats on the department's "reporting and collection needs" with respect to the United Nations. Directives included gathering intelligence on everyone from then-U.N. Secretary-General Ban Ki-moon to representatives of the Security Council. The cable also outlined electronic assets to be obtained, such as biometric information, passwords, and personal encryption keys.

It's no wonder that the U.S. secretary of state at the time, Hillary Clinton, was such a big fan of the U.N. Perhaps Trump's seemingly softened stance on the U.N. is an indication that he recognizes the intelligence-gathering opportunity provided by this pricey, bloated, mostly useless international organization.