Christmastime in Moscow with Vladimir Putin 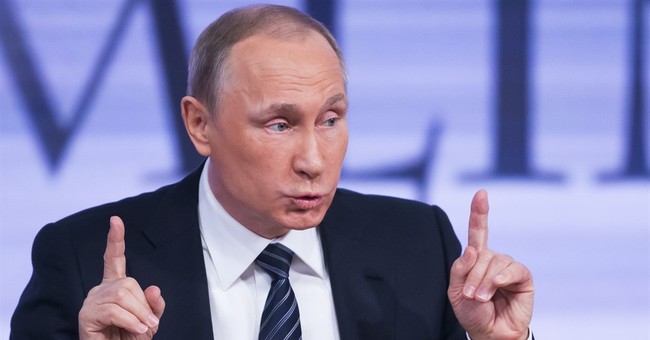 MOSCOW -- Walking around downtown Moscow at Christmastime in the wake of a press conference with Russian President Vladimir Putin, I was struck by a distinct feeling of deja vu from my Canadian childhood. Not since then had I heard so much English-language Christmas music infusing the cold, crisp air, or seen so many decorations everywhere that include crosses and religious symbols as well as secular reminders of the season. There is no "war on Christmas" here.

Russia is moving in the opposite direction from the West in critical ways: There's a sense here that Putin is trying to preserve what is good of Russian culture and character while steering the country towards a freer way of thinking and operating -- albeit still at a very Soviet pace. The West, by contrast, seems to be destroying its heritage and roots with initiatives straight out of the leftist playbook while becoming increasingly more shackled economically -- all at lightning speed.

Sitting just a few feet from Putin for more than three hours during his marathon annual press conference on December 17, I was struck by a few things. Even with no teleprompter, he was spontaneously articulate and demonstrated fluency in subjects as trivial as parking costs in downtown Moscow -- "something that we bring up here as a last resort," a Russian journalist friend told me. In person, Putin looks about 20 years younger than his 63 years. When someone else remarked the same, he joked that it's a doping-free achievement.

Among Putin's stated priorities: creating new technology to improve productivity, de-bureaucratizing the economy, creating better conditions for business and helping entrepreneurs. Putin had said earlier this month that "a whole army of inspectors continues to hinder the operation of good businesses."

The Russian president was measured and pragmatic. The only time that Putin became visibly upset was while discussing Turkey's downing of a Russian fighter jet over Syria and the death of the pilot. Nonetheless, he later said that Russia doesn't consider Turkey hostile.

Putin bristled at the suggestion that Russia's bombardment of the Islamic State amounted to a war. He also insisted that the campaign is causing no economic hardship.

"This does not involve any serious strain, including strain on the budget, Putin said. "Some of the resources that we earmarked for military training and exercises -- we simply retargeted them to the operations of our aerospace forces in Syria."

Putin said there will be no Russian sanctions against Ukraine in the wake of the recent conflict between the two nations, but that Ukraine will lose preferred-country status starting January 1 and will be subject to tariffs.

Interestingly, Putin mentioned Saudi Arabia as a potential ally. The Saudis' oil interests have long competed with Russia's, and Saudi support of "Syrian rebels" helped give rise to the Islamic State, which Russia is now aggressively fighting.

"We are now considering joint projects in military-technical cooperation with Saudi Arabia," Putin said. "It's a multibillion-dollar program."

This surprising volte-face could be the result of Saudi Arabia seeing the writing on the wall with regard to falling oil prices. The Saudi economy depends almost entirely on oil, and Saudi leaders may have decided that it's wise to align with the Russia-China sphere, particularly since China is now Saudi Arabia's largest trading partner and its biggest oil customer.

In the new global economy, most manufacturing has been outsourced to developing countries, and Putin has apparently decided to carve out a niche for Russia by leveraging its high-tech capabilities "inherited from the Soviet era."

Putin discussed Chinese investment in future aviation projects, and he is quite proud of the new Russian-made PD-14 civil aircraft engine, considering it the linchpin in Russia's development of a line of passenger airplanes. Presumably this would include the medium-range MS-21, the first exports of which are scheduled for 2017. Putin said the new engine is better than those of Pratt & Whitney or Rolls Royce, which are the global gold standard.

With regard to the United States, Putin said that Russia "will work with any president voted in by the American people." After the press conference, when asked about Republican front-runner Donald Trump, Putin called him "bright and talented" and "the absolute leader in the presidential race." Trump later acknowledged Putin's praise and called it "a great honor."

It's no surprise to see mutual admiration between two charismatic, pragmatic men, each staunch defenders of their respective national interests. The only real differences between Russia and the United States these days are economic. The possibility of Putin and Trump tackling a few challenges together is a welcome thought.