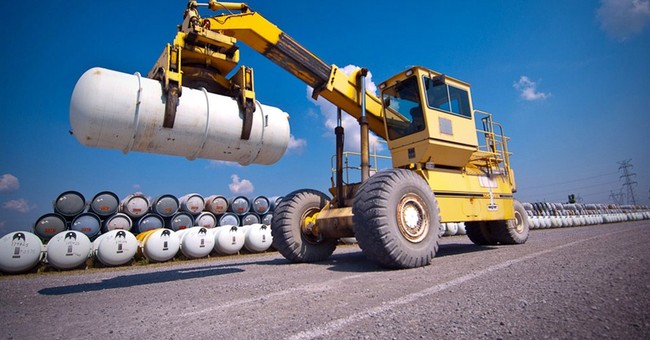 After young and healthy Marine Matt Parker fought for his country in the Middle East, he mysteriously came down with tumors. Now, he finds himself without adequate help from the country he fought for. I’ve known Matt since he was a small child; our families grew up together in church, and in high school I taught his sister violin lessons. Matt is a straight shooter; a bright, honest guy raised with solid values by outstanding Christian parents.

Matt enlisted in the Marine Corps in 1994 at age 19. He told KOMO News 4 in Seattle, “ I wanted to be a part of the best fighting force in the world.” Desert Storm and the majority of the fighting in Iraq had ended by then, and so Matt went to the Middle East as part of Operation Southern Watch, which was more of a recovery and rebuilding mission. His unit was tasked in part with arming Cobra helicopters in Kuwait with special 20mm rounds tipped in depleted uranium. No one instructed the Marines to wear gloves or protective clothing.

Upon finishing his service and returning to civilian life a few years later, he started having mood swings, joint pain, insomnia and severe headaches. Sinus infections led to a seizure in 2011, and after he was rushed to the hospital, doctors discovered a massive tumor in the front of his head. The doctors successfully removed the tumor, and asked him if he’d been exposed to radiation.

Matt contacted Marines in his former unit to see if others had developed similar health issues, almost 15 years after their service together. One of them, Dan Paris, told Matt he’d also developed what appeared to be a tumor growing in his head, and had similar physical symptoms.

Neither vet has a history of brain trauma in their families. Matt and Dan served together from late April 1994 until about September 1997. Together, they realized they had both come down with what has been labeled Gulf War Syndrome, a “chronic multi-symptom disorder affecting returning military veterans and civilian workers of the Gulf War.” One of its main causes is considered to be exposure to depleted uranium, which was used in 30mm and smaller caliber machine-gun bullets on a large scale for the first time during the Gulf War. Investigative journalist Christopher Bollyn discovered that “40 percent of the soldiers in one unit were found to have malignant cancerous growths when they returned from a tour of a year and a few months in Iraq.”

Matt’s family life started to fall apart as his health deteriorated. His marriage ended in divorce, and he lost his home to foreclosure. He developed a second tumor.

Dan’s tumor is practically inoperable. If removed, it will very likely affect regions of his brain associated with motor function, speech and higher learning. So far, he is delaying the inevitable; putting up with increasing levels of pain as the tumor continues to grow. Dan applied for disability, which was denied without even the courtesy of a notification. He has been granted 100 percent disability assistance for a shoulder injury, but has only been able to receive 40 percent disability assistance for his other ailments.

Matt applied for disability with the Veterans Administration in 2012, citing the exposure to depleted uranium as the reason for his disability. The VA denied his request, claiming there was no connection between his tumor and the exposure. They also bizarrely claimed that Matt had never been stationed in the Ali Al Saleem area in Kuwait where the exposure to depleted uranium took place. This isn’t true, because he’d been in a bus accident in Kuwait, resulting in a hospital stay - as well as teasing from his unit. The VA inexplicably lost the paperwork documenting the hospital stay.

Matt got nowhere until he went to the media with his plight. Nevada congressional leaders in Washington, D.C., including both U.S. Senators, began looking into the situation. Veteran's Advocate and retired Army sergeant, Dan Swafford of Phoenix, Ariz., put together an 80-page rebuttal to the VA’s turndown, which he turned in to the VA in Reno, Nev., last September.

Shockingly, when Sen. Harry Reid’s office requested an update recently from the VA on Matt’s case, the VA representative told them they had lost his 80-page appeal. Hopefully it was just incompetence, but the level the VA has gone to avoid recognizing the correlation between depleted uranium exposure and health problems is extremely troubling.

Many of the vets who have been exposed to depleted uranium have very little time left to live. Army veteran

Patti Redd, a civilian contractor who worked for a company that dumped contaminated military hardware in the Pacific Ocean,

If there was any doubt that exposure to depleted uranium causes tumors, the strikingly similar cases of Matt and Dan, who served together under the exact same circumstances, should provide compelling evidence of that correlation.

Astonishingly, the U.S. Department of Defense claims that no human cancer of any type has occurred as a result of exposure to either natural or depleted uranium. Additionally, numerous studies have been done claiming that there is no correlation - but how many of those studies were funded by the government?

It is time for answers and for help for our valiant veterans. It is bewildering why the government claims there is no link between exposure to depleted uranium and severe health problems such as the development of tumors in young healthy people. It makes you wonder if there is some kind of cover up going on to protect certain powerful bureaucrats and crony politicians who should have known better. Matt, Dan and the other suffering veterans don’t deserve this mistreatment for serving their country.