Phyllis Schlafly
|
Posted: May 17, 2016 12:01 AM
Share   Tweet
The opinions expressed by columnists are their own and do not necessarily represent the views of Townhall.com. 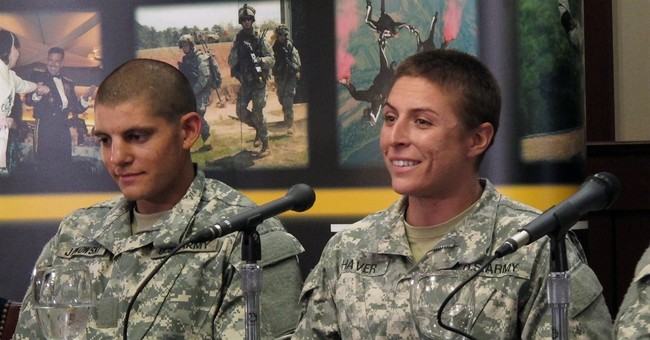 Trending
Less than a year after the Supreme Court decided that marriage no longer needs partners of the opposite sex, the other two branches of the federal government are moving rapidly to eliminate all rational distinctions based on sex. Taken together, these new actions reflect the unscientific (but oh-so-politically correct) dogma that there are no fundamental, biological differences between male and female.

From the executive branch, controlled by President Obama and the Democrats, came a joint letter from the Departments of Justice and Education addressed to the nation's public schools and colleges that receive federal financial assistance. The letter instructed schools that henceforth they must recognize students' "internal sense of gender" as superseding "the sex they were assigned at birth."

The federal letter was prompted by the controversy over North Carolina's new law prohibiting men from entering women's restrooms, but it's not limited to restrooms with private stalls. It also requires schools to allow students to enter the group shower and locker room that accords with the student's "internal sense of gender" and even to be addressed with the pronoun they prefer.

Not to be outdone, the Republican-controlled Congress had its own bout of gender dysphoria, the trendy new ailment defined as stress caused by inability to identify with your biological sex. The Armed Services Committees of both Houses have approved legislation that would require young women to register for Selective Service, which puts them on a list to be called up for military combat.

The House committee acted first, voting 32-30 to include young women in the registration for a military draft. Two weeks later the Senate committee included a similar provision by order of its chairman, John McCain, and a motion to delete that provision was defeated by a vote of 19-7.

Senator McCain, who once joked that the liberal media is "my base," may feel that catering to the feminists will earn him enough free media to fend off a primary challenge from the conservative state senator, Dr. Kelli Ward. The draft-our-daughters provision was also supported by Republican feminists on Armed Services such as Sen. Kelly Ayotte (NH), Sen. Joni Ernst (IA), and Rep. Martha McSally (AZ).

Mandatory registration of women for military service was rejected by a Democrat-controlled Congress in 1980 after it was proposed by President Jimmy Carter. The exemption of women was upheld as constitutional by the U.S. Supreme Court in a decision written by the late Chief Justice Rehnquist during the term when his law clerk was the future Chief Justice, John Roberts.

Any woman can seek to enlist in our all-volunteer military, but men are six times more likely than women to volunteer and serve. The military meets its self-imposed quota of 15 percent women by providing childcare, "reproductive care" and other benefits that young male soldiers don't need or want.

It makes no sense to force all young women to register for a future draft when only a small percentage of them would ever enlist. Our national defense is not enhanced by maintaining a list of millions of women who have no intention of becoming soldiers and would never be fit for combat.

The purpose of our military is to field the finest troops possible to defend our Nation and win wars. The goal of feminists, however, is to impose a mindless equality, regardless of how many people it hurts.

Women lack the upper-body strength that men have. Soldiers need to carry into the battlefield gear weighing 60 to 120 pounds, which is impossible for most women.

Soldiers must also move quickly while carrying these heavy loads, which creates stress for their knees and other joints. Medical studies show that women athletes have four to six times the risk of men in suffering knee injuries.

An injury on the battlefield endangers not only a soldier who is hurt, but also others around her. Studies show that men tend to spend too much time helping an injured female soldier, rather than advancing the military objectives of the battle.

Last year the Marine Corps did a study that compared the effectiveness of all-male troops to that of co-ed troops. In results that should surprise no one, the all-male units had much lower injury rates and higher overall performance than mixed-gender units.

Our national security is not served by this misguided attempt to force young women to register for a military draft. Tell your Representative and Senators to remove this offensive provision when the national defense bill comes to the floor.