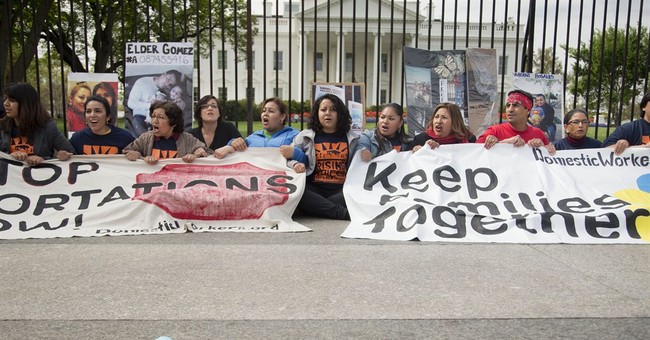 Trending
American-born workers have had a net loss in jobs since 2000, while all of the job growth since then has gone to immigrants, according to a remarkable new study by the Center for Immigration Studies. This revelation comes as some Republican politicians continue to flirt with amnesty and the disastrous proposal of so-called immigration reform.

Meanwhile, a new Gallup poll proves that the American public is increasingly fed up with the high levels of immigration flooding our job market and our nation. By nearly a 2-1 margin, Americans now want less immigration rather than more: 41 percent would like to see a decrease in immigration, while only 22 percent want to see immigration increase.

Among the 22 percent who want to expand immigration are Democrats who view illegal immigrants as a way of expanding their party's political base. But that shortsighted political motivation is certainly not good for our country, and it is devastating for the dwindling job opportunities available to Americans.

In 2000, 114.8 million Americans who were born in the United States had jobs here. Nearly a decade and a half later, in 2014, that total had decreased to 114.7 million, and millions of Americans have been unemployed for many years.

Millions of new jobs were created during that same period in the United States, but immigrant workers soaked up all that job growth. There was a net gain of 5.7 million in jobs during those 14 years, from 17.1 million in 2000 to 22.8 million in 2014, but the overall net effect was that 100 percent of the job growth went to immigrants and 0 percent to workers born in the U.S.

Steven A. Camarota is research director for the Center for Immigration Studies and the lead author of this startling report. His investigation proves that there are now 58 million Americans born in our country who do not have jobs and that 34 percent of working-age Americans are without work, a number far higher than in 2000 when the number of out-of-work Americans born here was 26 percent.

Despite the scandal of so few jobs for Americans, the legislation pushed by Democrats for so-called immigration reform would vastly expand job opportunities for immigrants at the expense of American-born workers. The Senate's misguided Gang of Eight bill would sharply increase the numbers of legal and illegal immigrants in our country, far above the 40 million who are already here, plus adding an incentive for many more to illegally enter our nation.

Republican Sen. Jeff Sessions of Alabama has been a leader against expanding immigration under the guise of the phony "immigration reform," and he persuasively explains how hurtful unrelenting immigration is for our nation and especially for U.S. workers. He observed that the recent findings in this report by the Center for Immigration Studies "are shocking, and represent a dramatic indictment of immigration policy in Washington, D.C."

In the last presidential election, Mitt Romney lost because he failed to attract the support of millions of working-class Americans who have been hit the hardest by the harmful consequences of liberal demands for more and more immigration. Sessions wisely advises Republican leadership to "sever themselves from these demands and present themselves to the American public as the one party focused on everyday working people."

Sessions is obviously right in counseling that "the sensible, conservative, fair thing to do after 40 years of record immigration is to slow down, allow assimilation to occur, allow wages to rise, and to help workers of all backgrounds rise together into the middle class." Republican Majority Leader Eric Cantor was defeated in a landslide in his own primary after failing to heed this advice. Will other Republican leaders finally get the message?

Meanwhile, the Democrats' and media demands for "immigration reform" have had another devastating effect on our nation: attracting a projected 100,000 children to cross our Mexican border illegally in this year alone and bringing with them contagious diseases that could "spread like wildfire," according to Dr. Jane Orient. "Legal immigrants have always been required to undergo health screenings," Orient explained, "but these kids coming have no medical screenings and no vaccine records."

The doctor observed that many childhood diseases have been largely and wonderfully eradicated from our country, such as measles and chickenpox, but that leaves Americans without natural immunity against them. If they are brought into this country by unlawful immigration, then they can spread quickly, and young doctors who have never seen some of these diseases may be slow to recognize them.

Noroviruses are highly contagious infections that carry symptoms of diarrhea and vomiting. "All we need is one outbreak of that virus, and we would have an overwhelming public health crisis," Orient warned.