The Republcans' Call to Arms 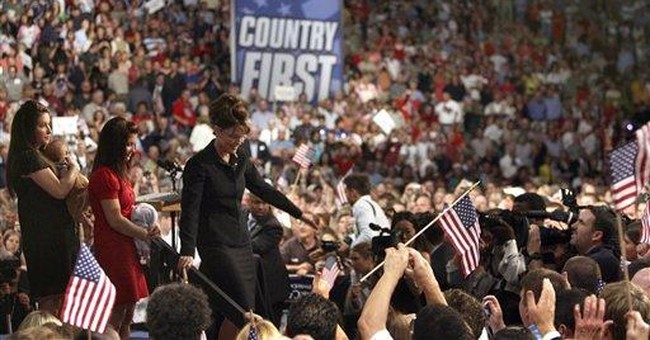 We recall the words of the old popular song, "What a Difference a Day Makes; 24 Little Hours." In this political year, it was actually 38 hours, but the poetry is the same.

That's the time-spread between the locking up of the 2008 Republican platform on Wednesday at 8 p.m. and the selection of conservative Alaska Gov. Sarah Palin as John McCain's Veep choice at 10 a.m. on Friday. In just 38 hours, disheartened conservatives were transformed into enthusiastic Republicans, armed and ready to storm the pseudo-Greek temple that Barack Obama erected in the mile-high city of Denver.

It's hard to exaggerate the turnaround in the attitude of grassroots Republicans -- a CNN reporter expressed herself as "shocked." Palin is a breath of fresh air to John McCain's campaign.

The Republican Party platform, hammered out by a grassroots committee with representatives from every state, gives Republicans a basis on which to rebuild their party. It's a "call to arms," a platform of bold colors with no pastel shades, just as Ronald Reagan described the 1976 platform that delegates adopted after rejecting the Gerald Ford-Henry Kissinger platform.

This year's platform is a complete break from the ponderous 2004 platform, which strung together 40,000 tiresome words. The 2008 platform isn't about personalities; it's about principles.

The 2004 platform had endorsed the "Free Trade Area of the Americas," a foolish notion to bring about the economic integration of the Western Hemisphere and allow cheap labor to replace American jobs. The 2008 platform sensibly calls for "a Western Hemisphere of sovereign nations with secure borders," and the committee unanimously rejected the goal of a "North American Union" modeled on the European Union.

This year gave us a clear improvement over the previous platform in regard to the English language. In 2004, Republicans called English "our nation's common language" and endorsed bilingual education, but the 2008 platform supports "English as the official language in our nation" because it is "essential as a unifying cultural force" and omits mention of bilingual ed (often called language apartheid).

The 2004 platform had lined up with the now-defeated amnesty plan of the U.S. Senate. It endorsed a "new temporary worker program" and allowing illegal aliens currently holding jobs in the United States "to apply for citizenship in the same manner as those who apply from outside the United States."

The 2008 platform doesn't mention the WTO and includes several paragraphs of criticism of the United Nations, citing its "scandal-ridden and corrupt management," the "disproportionate" dues we are forced to pay, and its discrimination against Israel and the Vatican.

The 2008 platform specifically rejects the United Nations Treaty on Women and the UN Treaty on the Rights of the Child, and expresses "deep reservations" about the UN Law of the Sea Treaty.

The 2008 platform recognizes that energy independence is vital to our national security. The platform calls for drilling in "new oilfields" in Alaska and elsewhere, as well as developing nuclear power and clean coal.

The 2008 platform demands that "the risk of climate change" be based on "sound science without succumbing to no-growth radicalism." The platform also cautions against "doomsday climate change scenarios."

The plank affirming that "the unborn child has a fundamental individual right to life which cannot be infringed," which has been part of the Republican platform since 1984, was of course included again this year. The 2008 platform becomes the most pro-life ever by endorsing the Born Alive Infants Protection Act and the ban on partial-birth abortion, both of which identify a sharp division with Barack Obama's legislative record.

Four years ago, many grassroots Republicans were offended by a platform that called public schools "a foundation of a free, civil society" and bragged about having given us "the largest increase in federal education funding in history."

The 2008 platform better represents Republicans by standing up for parents' rights to use vouchers, tax credits, private schools or home-schooling, and to stop public schools from forcing students to answer personal, non-academic questionnaires without prior parental consent.

Sarah Palin and the 2008 platform have given Republicans a new lease on life and put John McCain on the road to victory.