Phil Kerpen
|
Posted: Apr 23, 2020 12:01 AM
Share   Tweet
The opinions expressed by columnists are their own and do not necessarily represent the views of Townhall.com. 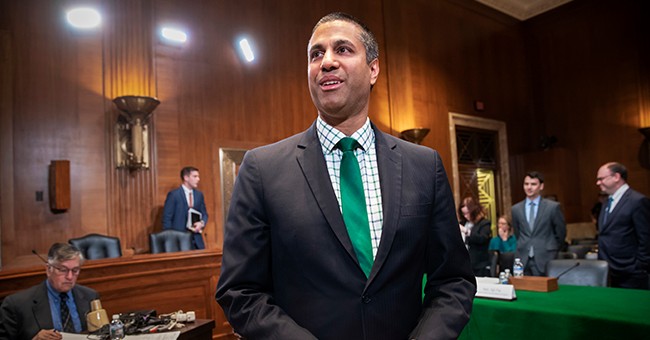 Not even a global pandemic can keep us from another battle in the long, bitter, and ever more disconnected from reality net neutrality wars. The FCC just closed yet another comment period in this seemingly never-ending saga, and the usual left-wing groups used it to beat their same old drums.

But as millions of Americans bunker in their homes typing away on laptops, smartphones, and tablets while watching their smart TVs in between their streaming video calls, we should take stock in the marvelous fact that the Internet is holding up just fine while an enormous surge of formerly offline activities move online.

For two glorious years the left achieved their goal of reducing the Internet to a regulated public utility - and nothing they said would happen did. There was no nirvana for users or rebirth of political freedom. There was a deficit of investment and a boom in paperwork and bureaucratic nonsense, and that's about it.

Then net neutrality was repealed by President Trump's pick for FCC chairman, Ajit Pai - in the face of a hyperbolic pitched political mobilization exercise in which the media and left wing groups claimed the world would end without the Obama regulations that had existed for all of two years. The hyberbolic mania reached new levels of extremism - up to and including death threats leveled at the young children of members of Congress and Chairman Pai, and a bomb threat called into the FCC on the day of the vote.

Of course nothing the angry net neutrality obsessives alleged would happen came to pass. Instead, we saw an incredible increase in network capacity, speed, and resilience as ISPs felt confident that their network investment would not be divested from them in the fever dream of the Marxist leaders of the net neutrality movement, like Free Press founder Robert McChesney.

It is hard to think of any greater enhancement to public safety, quality of life, and simple sanity during a period of prolonged home confinement than having reliable, fast, high quality network connectivity. The current pro-investment, pro-market policy has produced that outcome.

Europe - which has taken a more heavy handed regulatory approach than the Pai FCC - is having a different experience, with many countries throttling video traffic to prevent networks from breaking down.

Even Tom Wheeler, the former titular FCC chairman who adopted the Obama net neutrality order at the direction of the White House, has been forced to acknowledge the stunning outperformance of U.S. broadband networks compared to Europe. "Credit is due to the nation's broadband providers. The fact we can work from home is the result of hundreds of billions of investment dollars and construction and operational skill," he said.

What he didn't mention is that the Obama order he rubber-stamped was referred to as "the nuclear option" for its devastating negative effects on investment. He praised companies for a success that depended on the reversal of his most significant policy.

Of course, that won't stop the latest shrieks about the need for government to assert control over ISPs, a tenet of faith on the political left.

The rest of us, who are making do as best we can with the current lockdown situation should live in daily appreciation of the Pai FCC's commitment to fixing the ideologically motivated, economically ignorant actions of the Obama administration.