Phil Kerpen
|
Posted: May 16, 2019 12:01 AM
Share   Tweet
The opinions expressed by columnists are their own and do not necessarily represent the views of Townhall.com. 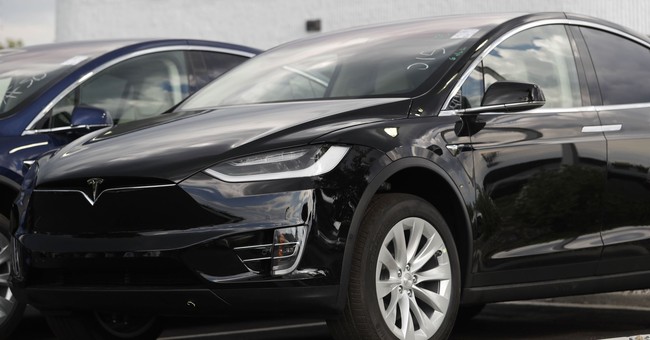 With the $7,500 tax credit for electric car buyers already in the phase out period for the two biggest manufacturers - Tesla and GM - it's no surprise that many Democrats in Congress are clamoring to lift the cap and keep the subsidies flowing. Unfortunately, several Republicans are joining the effort, creating unfortunate bipartisan support for a piecemeal version of the crackpot Green New Deal they have been rightly mocking and ridiculing.

The so-called Drive America Forward Act would triple the existing cap on subsidies of 200,000 per manufacturer - massively expanding a program that was always supposed to be temporary and was originally premised on the national security rationale that it would lessen dependence on foreign oil - a now comically anachronistic concern when the United States has become a leading oil exporter.

Moreover, while the Green New Deal is a socialist income leveling exercise in the guise of environmental policy, electric vehicle subsidies use environmental delusion as a cover for a wealth transfer from poor and middle income Americans to the rich who buy electric hobby cars as their third or fourth vehicle. Voters agree - with a recent poll showing 67 percent do not think their tax dollars should help pay for electric vehicle subsidies.

There is also a geographic dimension to the wealth redistribution.The most recent industry data shows that nearly half of all electric vehicles sold in the United States are sold in California, which has its own lavish subsidies at the state level.

A September 2018 NERA Economic Consulting study looked at the economic impact of eliminating the cap and found that the costs outweigh the benefits.The study finds total household income falling as a consequence of lifting the cap by $7 billion in 2020 and $12 billion in 2035, which is about $50 to $70 per household in lost income every year.

That's a cost of over $50 every year to middle-income Americans to pay for subsidies for rich people in California.

Orrin Hatch, the original sponsor of the bill, explained the logic behind the cap in 2007:

"I want to emphasize that like the tax credits available under current law for hybrid electric vehicles, the tax incentives in the FREEDOM Act are temporary. They are needed in order to help these products over the initial stage of production, when they are quite a bit more expensive than older technology vehicles, to the mass production stage, where economies of scale will drive costs down and the credits will no longer be necessary."

At the time, big subsidies for electric vehicles were justified based on the theory that they were needed to lessen American dependence on foreign oil. A decade later, America is the largest oil and gas producer in the world and electric vehicles are a mature enough technology that they should be left to succeed or fail on the preference of consumers, not politicians.

Ironically, it is now electric vehicles that are vulnerable to strategic supply disruptions because they require rare earth minerals for their motors and batteries -the production of which is overwhelmingly controlled by China. Such resources also present moral issues, with the cobalt used for batteries sourced in part from Congo mines worked by children in hazardous conditions.

Meanwhile, gasoline vehicles have become vastly more environmentally friendly and fuel efficient. In fact, a study last year from the Manhattan Institute found that widespread deployment of electric vehicles would only reduce greenhouse gas emissions by 1 percent - and would increase emissions of SO2, NOx, and particulate matter.

The bottom line: efforts to raise the cap are a cash grab that will force taxpayers to subsidize wealthy Californians for no presently valid reason. Congress should let the subsidy phase out as scheduled.