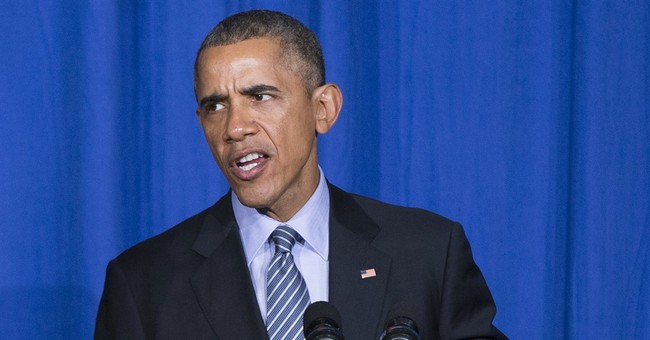 What happens when you spend seven years trying to prove a big infrastructure project will increase global warming and come up empty? Do you admit you were wrong? If you're President Barack Obama and Secretary of State John Kerry, the answer is no. You deny the science and announce that the over-the-top PR campaign by your liberal allies, funded by hedge fund kingpin Tom Steyer, has created the perception that the project is bad for global warming, and thus it must be blocked without regard to science.

President Obama laid out his personal standard for approving the presidential permit for the Keystone XL pipeline in his global warming speech at Georgetown University on June 25, 2013. "Our national interest will be served only if this project does not significantly exacerbate the problem of carbon pollution," he said. "The net effects of the pipeline's impact on our climate will be absolutely critical to determining whether this project is allowed to go forward."

The State Department 2014 Supplemental Environmental Impact Statement (SEIS) not only concluded that approving the pipeline would not increase greenhouse gas emissions, but would actually reduce emissions relative to the "no action" alternatives.

When timely approval of the pipeline looked likely by the end of 2011, rail shipments from Canada were less than 2,000 barrels per day. But when the Obama administration made clear that no decision on the pipeline was coming any time soon, the market reacted. Rail shipments skyrocketed to over 190,000 barrels per day in January 2015 and remain above 100,000 even with lower oil prices.

Whatever you think about global warming, lives are at stake. The State Department also looked at the safety implications of rejecting the pipeline and found "potentially an additional 49 injuries and six fatalities for the No Action rail scenarios compared to one additional injury and no fatalities for the proposed Project on a yearly basis."

So how did President Obama get to "no"?

The operative language, with emphasis added, is on page 28 in Secretary Kerry's 32-page National Interest Determination. "The broad perception of the oil that would be carried by the proposed Project is that it would be 'dirty,'" Kerry said, referencing the deep-pocketed smear campaign run by well-heeled environmentalist groups with Steyer's backing.

"Whether or not that oil would still find other transport to market in the absence of the proposed Project (that complex issue is analyzed in the Supplemental EIS), the general perception is that a decision to approve the pipeline would pave the way for the long-term and intensive extraction and importation of that oil into the United States."

In other words: who cares that the oil will get to market anyway with higher greenhouse gas emissions and more fatal accidents? Or that the president's own "net effects of the pipeline's impact on our climate" standard is being violated? The "general perception" created by the smear campaign is what's important.

Then Kerry gets to what he really cares about: "Issuing a permit for the proposed Project would thus be understood at this time as a decision to facilitate particularly GHG-intensive crude imports... undermining the power of U.S. example as a leader in promoting the transformation to low-carbon economies."

As Kerry and Obama head to Paris for the latest United Nations global warming confab, they want the appreciation their global environmental elite friends are sure to give to a move that is perceived to be pro-environment - regardless of the actual scientific facts. While they enjoy that nice green feeling in Paris, thousands of Americans who could be working building that pipeline will not be.