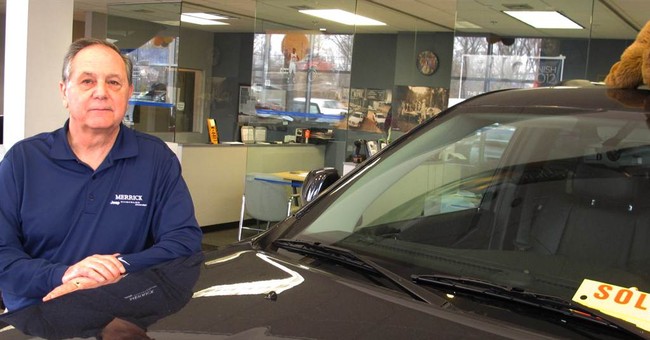 The Senate may vote soon on an amendment by Democratic senator Dick Blumenthal that would make it illegal for dealers to sell any car with an open recall. That might sound good, but there's a huge problem: many recalls are for items as trivial as a printing error in the owner's manual, and when a part is simply unavailable, there's nothing you can do about it. The Blumenthal proposal would therefore effectively make it impossible for millions of Americans - finding their cars suddenly with little or no trade-in value - to buy a new car.

In his press release for the so-called Used Car Safety Recall Repair Act, Blumenthal says: "There are now more than 46 million cars and trucks on our nation's roads with unrepaired safety recalls." The proposal, which would prohibit the sale of those vehicles, could be considered imminently as an amendment to the highway bill on the Senate floor.

But are there really 46 million unsafe vehicles on the roads? Of course not.

Many recalls have almost nothing to do with vehicle safety. General Motors recalled Camaros because "the air bag warning label on the sun visor may peel off." Mercedes recalled a vehicle because "if the driver buckles his seat belt prior to starting the vehicle, the chime will not sound." Volkswagen recalled Routans because the owner's manual forgot to warn consumers not to place objects on or near the air bag on the instrument panel. Honda recalled vehicles because of incorrect contact information for the National Highway Traffic Safety Administration. (NHTSA, the guys in charge of the recall process. Have you ever had to call them?)

There is also the big problem of parts availability. Recall notices often go out despite the fact there is nothing an owner or dealer can do to resolve the problem. Sometimes, the engineers don't know what's wrong or don't have a fix. Sometimes, like with the GM ignition switch problem, there is an obvious but cost-prohibitive fix - replacing the entire ignition switch - so there is a need to develop a less expensive interim solution. Very often though, the problem and solution are both identified, but the parts aren't available because they are in production.

Consider the largest recall in history, Takata airbags that are in Chrysler, Ford, GM, BMW, Subaru, Mazda, Mitsubishi, Nissan and Toyota vehicles numbering an estimated 33.8 million. In May, NHTSA administrator Mark Rosekind said there was no estimate of how long it would take to produce replacement parts, but stated, "There is no question it could be some years."

Blumenthal's amendment would effectively slash the resale value of all of those vehicles to zero - for years. And that means dealers could offer - at best - only pennies on the dollar for trade-ins, because they would have to hold the cars indefinitely until the parts became available. That would be a disaster for consumers, for dealers, and for automakers.

A better approach would be to differentiate between truly dangerous defects for which vehicles should be immediately taken off the road and the more typical day-to-day issues that result in so many recall notices that many drivers become numb to them and leave them in the pile of junk mail. It would also be worth considering adopting the approach used by the Consumer Product Safety Commission, which does not send recall information to consumers until parts are available, making compliance more likely.

Another alternative Congress could consider would be to require dealers to notify buyers of open recalls at the time of purchase. That would let consumers make informed decisions without causing the major economic problems of the Blumenthal proposal.

The federal government has made motor vehicles the most regulated consumer products in America, and the current recall system has room for significant improvement. But the heavy-handed Blumenthal approach could destroy the value of your trade-in. The Senate should vote no..