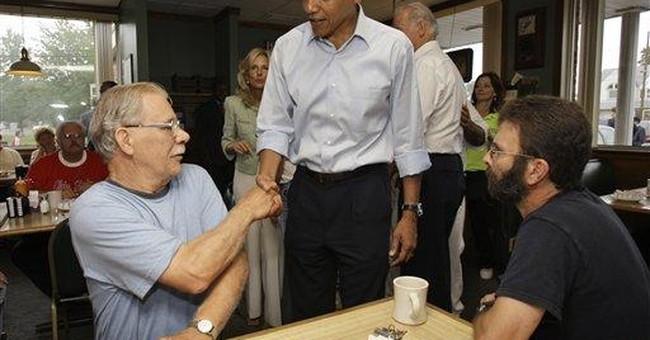 My generation has witnessed a change during our lifetime. It is has crept up on American families, like some kind of toe fungus; climbing almost imperceptibly up our collective legs over the course of many years. I am aware of it as are my elders, but today's younger generations have no clue.

I used to believe this was limited to the quality of goods. Local stores sold merchandise intended to last for generations. Furniture was made in America by American craftsmen. We used to buy such items at a reasonable cost, and there existed a bonus. Often, these investments in quality could be passed down to our descendants.

Over time, mega retailers have eliminated this concept. The local shops have been squeezed out and the masses have blindly opted for cheap instead. That nightstand that stood proudly by mom and dad's bed, perhaps destined to stand for coming generations used to be made of walnut, oak, or cherry wood.

Now it is made of pressed sawdust and glue, covered with veneer. At best it is a real wood veneer, but more likely it is some kind of plastic counterfeit. The nightstand of today is unlikely to survive moving day, much less be passed down to a nostalgic grandchild.

It is this ignorant acceptance of cheap counterfeits that has captivated the hopes and dreams of youth in the Democratic Party. Barack Obama's big speech at the Democrat National Convention was well delivered, but as usual it was wrapped in empty platitude, designed to look and sound beautiful to a society that feels the pressure of life's difficulties.

Unfortunately, the speech and all of its promises are worth as much as a designer life preserver. The fabric is lovely and oh how stylish it makes the wearer look, but it is missing an important element. There is nothing inside that will actually keep the wearer above water. It is a counterfeit life preserver that has no ability to actually float.

Barack Obama is as counterfeit as you can get. He spoke of family members who were notably American in some way, a grandfather who served in the army and grandmother who helped to build bombers, yet Obama himself has no such credentials. In fact, he seems to be more enamored by his African roots, beginning his speech with a reference to his father, a goat herder from Kenya.

Barack Obama stands for the democrats (and many media analysts) as someone who is well qualified for the highest executive job in the world. Yet he has no such credentials, no executive experience whatsoever, and his only claim to fame in his legislative career is that he has been running for President.

I lost a good amount of respect for Mort Kondracke, editor of Roll Call, who argued the validity of this qualification to Brit Hume. Even if one were to accept the argument in principle, the facts are that Barack Obama is not the genius behind his campaign.

He is handled as every candidate is, and his best and most notable quality is in the delivery of speeches. Nothing bears any true evidence of an ability to manage or to lead men in times of crisis. Barack Obama is but a veneer, and his qualifications break down to the sawdust they are propped up on with just a moment of thought.

John McCain on the other hand has proven leadership ability. He was an officer in the Navy, a leadership position. He was a leader to his men while in captivity as a prisoner of war, an example of leadership in crisis. Although, some of his work in the U.S. Senate may not fall in line with my desires, he was at least passionate, effective, and a leader for many years in his work there.

John McCain's foundation of leadership is real. It is not a fake veneer, pasted on to enthrall the masses.

Sarah Palin, McCain's chosen Vice Presidential running mate is an awesome choice and I could not be happier. Her story of accomplishment is enormously superior to that of the other side's choice for President. Two years as Governor of Alaska is not insignificant, especially when you consider the complex issues that Alaska deals with.

It was so pathetic to hear democrats warn us that Sarah Palin (Mayor of a town of only 9,000) would be a heartbeat away from the Presidency. I can assure you, that given the choice between Sarah Palin or Barack Obama for President and Commander in Chief of our Armed Forces, I would choose Sarah Palin in a fraction of a heartbeat.

I don't even want to cover Joe Biden. This man is nothing but a pathetic suit with a good smile. In fact, watching Joe Biden in Senate Hearings all these years is one reason I have come to this understanding of veneer over sawdust.

There is still time to share with our younger neighbors. Tell them how they have been cheated all these years, and that what they have been convinced to buy is little more than prettied-up sawdust. Warn them that if they are not careful and if they do not make quality choices, their children and their children's children will have nothing but rubbish to remember them by.

McCain and Palin are real. Obama and Biden are just plastic wrapped around sawdust and glue. That is the choice for America in November, and it really should not be a difficult choice to make.