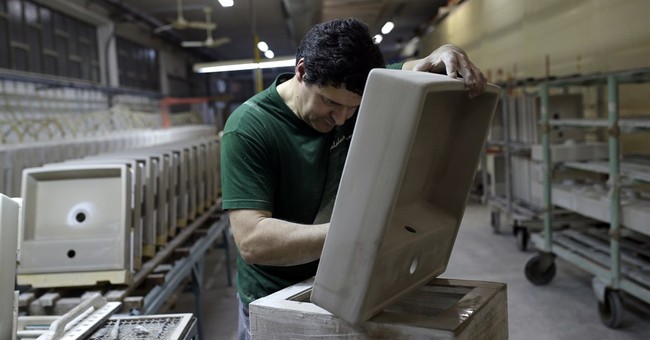 The Labor Department reported the economy added 126,000 jobs in March, less than half the pace of the past four months.

Unemployment stayed at 5.5 percent, as 277,000 additional adults chose not to seek employment. Were the same percentage of adults working or seeking work today as when President Obama took office, the unemployment rate would be 9.7 percent.

Despite Walmart and other big employers boosting lower-skilled workers’ pay, wage advances remained in the doldrums. For all but the most skilled professionals, pay will continue to advance only slowly, and going forward good jobs and pay raises will likely be even scarcer for struggling middle and working class Americans.

Here are five reasons jobs and wage growth are likely to be disappointing the balance of 2015 and in 2016.

The dollar is up against the euro and yen, making U.S. goods and services more expensive than competing products from Germany and Japan. Along with the impact of falling oil prices on U.S. drilling activity that discourages business investment.

So far consumers have been hesitant to spend the windfall from lower gasoline prices—retail sales have plunged in recent months—and business activity simply will not support adding a lot of new workers.

Advances in robotics, logistics and production design should permit productivity to advance at about 2 percent annually. If U.S. companies don’t find ways to use workers more efficiently, they will lose more ground to foreign competitors who do.

Consequently, forecasters such as at Wells Fargo, expect monthly employment gains to average only about 215,000 this summer and below 200,000 in 2016, leaving workers with less bargaining power in salary negotiations.

Hundreds of thousands of college graduates continue to work in jobs that historically did not require a degree, but many BAs may be well placed as Starbucks baristas.

Tests administered by the Council for Aid to Education indicate 40 percent of recent graduates are not proficient in the basic problem-solving skills normally associated with a college education. Hence they may not be worth much more than $10 or $15 per hour paid many high school graduates.

Many businesses complain about difficulties finding workers with the skills they need.

Although the United States has a world leading network of science and engineering colleges, too few Americans are enrolled. Two-year community colleges are not training enough young people for technical workers in high demand, and too many community college students instead are preparing to transfer into four-year college liberal arts programs.

5. Too Many Americans in the Wrong Places

Urban areas have recovered all the jobs lost during the financial crisis and added another 3 percent, whereas employment in rural areas is still down by an equal amount.

The balance of this year and next, the U.S. GDP growth will continue to inch along at a 2.5 to 3 percent pace. The economy will reward the top ten-percent of workers in engineering, finance and other elite services, but too many other Americans lack the skills to earn the $25 or $30 an hour needed to sustain a middle class life-style, and live in places where jobs of any kind remain scarce.