Legislatures’ Appointment of Trump Electoral Slates is Not Only Right for the Republic, It’s Good Politics

Peter Ferrara
|
Posted: Dec 08, 2020 12:01 AM
Share   Tweet
The opinions expressed by columnists are their own and do not necessarily represent the views of Townhall.com. 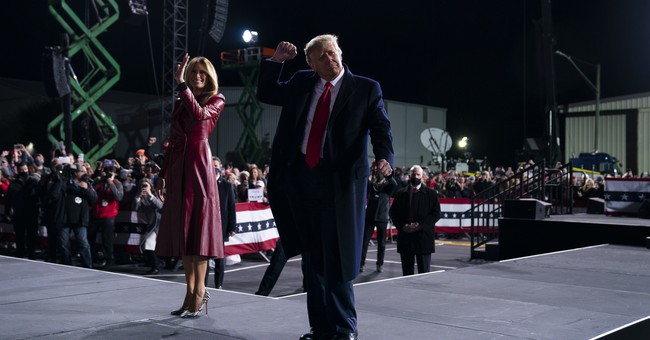 Editor's Note: This piece was co-authored by Lew Uhler and Joe Yocca.

Each day since Nov 3 reveals more and increasingly disturbing revelations about the outrageous and disgusting attempts in six key swing states to corrupt the presidential vote and fraudulently hand the election to three-time loser Joe Biden.

Not that you would learn much about these election crimes from the mainstream media who are busy shielding the truth so their candidate of choice can complete the steal.  But the current state legislative hearings on the election in Pennsylvania, Arizona, Georgia, Michigan and Wisconsin are uncovering mountains of outrageous examples of vote dumping, fraudulent votes and attempted coverups to make even the most hardened con man blush.

And that doesn’t even begin to factor in the sheer misfirings of groups like the Never-Trumper Lincoln Project and the U.S. Chamber of Commerce whose candidate slaughters nationwide point to a total repudiation of any kind of vote opposed to President Trump. Some blue wave, indeed.

Republican controlled legislatures in five of these disputed states should seize the moment and protect the will of the people — and the integrity of the highest election in the land — by assuming the power granted to them by the U.S. Constitution and slate their own electors for the actual winner, Donald Trump, before Dec 14.  But will they rise to the occasion?

Sorry if this bursts your fairytale, but Republicans aren’t generally elected to do much. Rather, they are chosen chiefly to stand up against those in our ruling class who would do unto us. They are installed as a bulwark against the natural excesses of those in government who intend to swell their power through heightened taxation and expansive regulation. Moreover, Republicans are elected to ensure the public trust that the U.S. Constitution is protected and obeyed. What the people who vote for Republicans want is very simple — they want an America as good as it’s promise.

But too often Republicans fall short of meeting those expectations, choosing to genuflect to the illusion of public opinion as projected by cable news, the New York Times and Washington Post, et al. whose masters — the Democrat Party — own the script. Time and again, this has brought utter electoral ruin to the GOP as they continually fail to recognize their one paramount role and the mandate behind it.

This time, however, there is so much more at stake, and a recent election upon which our Republican friends in those critical statehouses can and should use as their lodestar.

In addition to impressive Republican wins in the House of Representatives and the complete absence of any blue wave to hand the Senate to Democrats, the November election reported historic gains in statehouses for the GOP from sea to shining sea. Despite being dramatically outspent by the Eric Holder/Obama leftist initiative to flip state legislatures (which failed to achieve even one single success) Republicans added several state chambers and another governorship to their majorities.

Critically, without exception, these wins by Republicans were due to the strength of their allegiance to the President. No GOP candidate we found ran a campaign centered on distancing from President Trump and won. The President’s coattails were long and sturdy.

So why would Republicans in these states not sprint to protect the rightful reelection of the President for whom they not only owe their recent electoral success, but also need to stand with to protect the central institution of our Republic: fair and free elections?  Does it occur to any of them that you can’t possibly have such coattails without also electing the coat?  There is no way a majority of electoral votes were achieved by Basement Biden.  But there is much to lose if he is able to get away with the electoral crimes in these key states.

And what do these key-state Republicans think would happen to them in the next election cycle if they fail in their sacred duty today?  They have the legitimacy and the rightful authority to stop this theft. They may also be the final remaining opportunity to stand faithful to the Republic and its highest ideals.

But if Biden is allowed to become President after all these (and likely ever more) revelations of exposed corruption, do any of those key-state Republicans not clearly see the GOP primary in their future? Led by opponents endorsed by President Trump, all will be running on one simple yet powerful question: Where were you, Mr. GOP State Legislator, when your country needed you most and how could you have failed?