Boeing Under Assault from Chinese and European Corporate Welfare

Peter Ferrara
|
Posted: Mar 26, 2020 11:03 AM
Share   Tweet
The opinions expressed by columnists are their own and do not necessarily represent the views of Townhall.com. 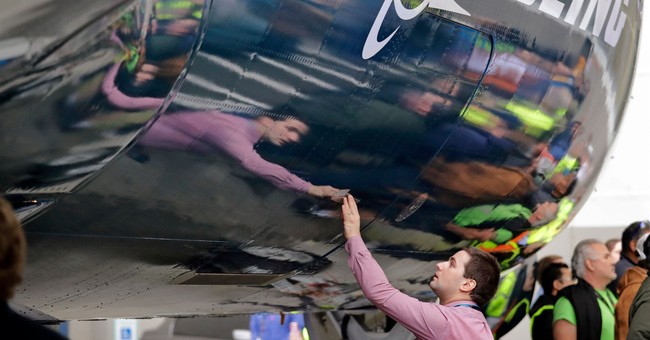 Boeing is America’s leading plane manufacturer. It is a backbone element of our economy, part of America’s manufacturing infrastructure that is called upon to produce air support for the U.S. Air Force, Navy, Marines, and even Army Infantry.

Boeing finances 17,000 suppliers, including such aviation industry stalwarts as General Electric, Honeywell, Spirit AeroSystems, and mom and pop shops of all sizes that manufacture 3M parts of every size. This not only provides millions of high paying blue-collar jobs, but also serves as core components of America’s arsenal of Democracy, adding up to America’s industrial base that manufactures American military superiority.

Consequently, Boeing is under assault from China, with its state-owned Commercial Aircraft Corporation (COMAC), backed by a flood of state Chinese Communist Party resources. Besides COMAC, Boeing is also in competition with state supported Airbus, competing from the European Union with state money.

Boeing and America’s aerospace industry need some one time bridge assistance, with one time loan guarantees to be paid back, preventing it from being outsourced to China and Europe. China wants the military dominance, and the EU is after the blue collar jobs.

That Trump understands this so instinctively explains his unique Republican appeal to blue collar voters and families. Boeing asked for $60 billion from public and private sources for the U.S. aerospace industry facing a looming liquidity crunch due to the impact of the coronavirus on the American economy, rescuing the aerospace supply chain. That can and should be based on loan guarantees that will be paid back through the developing V shaped recovery, as Trump’s Blue Collar Boom is restored. The Senate bill, now passed unanimously, includes a $17 billion loan program for businesses “critical to maintaining national security,” which covers aerospace.

The U.S. won the largest arbitration award in World Trade Organization (WTO) history, $7.5 billion, in its dispute with the European Union over illegal subsidies to Airbus. This follows four previous rulings from 2011 to 2018 finding that EU subsidies to Airbus violate WTO rules. This EU corporate welfare has cost American Aerospace companies hundreds of billions in displaced business since 9/11. After that attack on American airlines, Airbus went from 30-35% of the market to 50%, fueled by these government subsidies and corporate welfare.

Now due to the coronavirus, the aerospace industry will not survive intact without a bridge to liquidity. It will atrophy as their government subsidized international competitors continue to get preferential funding. All the American companies need is just government backed loans, to be paid back in full, to keep the doors open, while demand drops temporarily during the coronavirus panic.

President Trump has supported aid to the aviation sector of the economy, in his stimulus and rescue package of over $1 trillion ultimately. “We have to protect Boeing,” Trump said, “We’ll be helping Boeing.”

Boeing is in a war with the Chinese Communist Party, with virtually unlimited state backed resources. That is a war America cannot afford to lose, as China tries to challenge America’s global dominance.

But it is not just the manufacturers that need assistance. Airlines, airports, and suppliers need bridge financing as well, to stay in operation and out of bankruptcy. The coronavirus cannot be allowed to spin out into general deflation and not just recession but longer term depression.

“This will be one of the most important ways for airlines, airports, suppliers and manufacturers to bridge to recovery. Funds would support the health of the broader aviation industry, because much of any liquidity support to Boeing will be used for payments to suppliers to maintain the health of the supply chain,” Boeing spokesman Gordon Johndroe said.

Private banks can also be a source of financing. These private banks are much stronger than they were over 10 years ago. But if uncertain private financing cannot step up, then lender of last resort financing needs to back up America’s industrial, national defense base.

America has stepped up to beat much greater foes before. We beat much greater odds to defeat the Nazis, the Fascists and the Communists. Now we only need to band together and use our medical science, while maintaining our industrial base, to defeat a bug. We have nothing to fear but fear itself.