A Teachable Moment on Communist China 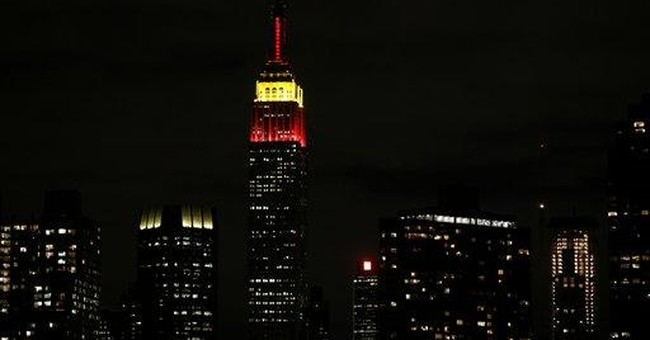 When I first heard it, I didn’t believe it. Alas, it’s true.

Last week, New York City’s Empire State Building was aglow in red and yellow. Why? To commemorate the 60th anniversary of the victorious revolution of the People’s Republic of China—i.e., the establishment of Mao’s Red China. (Click here for photo.)

I’m not kidding. This took place not in Beijing, or Pyongyang, or Havana, or, say, Moscow in the 1950s. It was done in New York City, in 2009, at its highest building, the very symbol of the Empire State.

In effect, New Yorkers basked in the glow of a nation that killed more people more quickly than any nation in world history—under the glorious colors of Chinese communism.

Had this happened in America 60 years ago, Harry Truman would have thrown a fit. Joe McCarthy would have called hearings to find out who was responsible. And that was before the Chinese killing-machine ramped up and got down to business.

Of course, I’m not shocked. For years, I’ve written and spoken about the appalling failure of American education, from public schools to our scandalous universities, to teach basic economics generally and the horrors of central planning and communism specifically.

Several years ago, I did a review of high-school “civics” texts used in public schools. What I found on China was awful. I’m not exaggerating when I say that portions of certain texts looked like they had been lifted from propaganda sheets churned out by the PRC’s Central Committee. There was nothing on the staggering death tolls generated by Red China, nor the stifling array of human-rights travesties.

To the contrary, there were rosy descriptions of life in the Chinese classroom, of “youth groups” and “children’s organizations” like the Young Pioneers, of the wonderful achievements for Chinese women under communism—with no mention of the repressive one-child policy. One text, titled, Global Insights, claimed that Mao’s Great Leap Forward enabled China to “make significant economic gains under communist rule. By the mid-1960s, it was ranked among the ten leading industrial nations in the world.”

When our schools teach ignorance, we shouldn’t be surprised when ignorance results. This has been the Long March of our educational establishment. We are reaping what we’ve sown.

In the interest of offering a smidgen of a corrective, I’ll try to turn this into a teachable moment. Perhaps I can provide some suggestions to educators and parents.

Here is why Red China should not be memorialized:

Within the first two decades of communist China’s existence, upwards of 60-70 million people died. They died from purges, murder, malnutrition, starvation, the collectivization of agriculture, and an overall complete transformation of society through totalitarian communism. This happened primarily under the Great Leap Forward (1957-60) and the Cultural Revolution (1966-69).

An entire nation and its people were forcibly molded into one gigantic social laboratory. Private possessions were eliminated, from clothes and hygiene products, to pots and pans, to the most basic liberties, from speech to press to conscience. “Private fires” for cooking food were banned, with the only permissible smoke being that which emanated from collective kitchens.

Two reputable sources on the death tolls that resulted are the seminal work by Harvard University Press, "The Black Book of Communism," which estimates 65 million dead, and the recent authoritative, "Mao: The Unknown Story," which claims over 70 million dead.

To give you a sense of the calamity, this vast killing field exceeded the total dead in World War I and II combined.

Beyond the numbers, if you want to educate yourself or your children on Red China, here are some particularly good books: Jung Chang and Jon Halliday, “Mao: The Unknown Story;” Nien Cheng, “Life and Death in Shanghai: Communism in Mao Tse-tung’s China;” Li Zhisui, “The Private Life of Chairman Mao;” Jung Chang, “Wild Swans: Three Daughters of China;” John King Fairbank, “China: A New History;” and Jasper Becker, ”Quiet Ghosts.”

There’s a vivid depiction in Becker’s “Quiet Ghosts,” where the inmates of Mao’s nation-turned-insane-asylum scavenge the fields during the day, looking for seeds, frogs, salamanders, insects, tree bark, anything to eat, while at night they wander the paths in search of human corpses to devour.

This wretched scene has played out again and again under communism. Mao’s experiment was repeated with the same horrific folly in Cambodia from 1975-79 and North Korea from 1995-98. (On these, I recommend Loung Ung, “First They Killed My Father,” and Kang Chol-Hwan, “Aquariums of Pyongyang: Ten Years in the North Korean Gulag.”) The people of those nations, too, were ignorant of the unspeakable failures of central planning and collectivization.

The brutal madness that raged in Red China isn’t anything to commemorate. Our ignorance in America has moved from appalling to offensive to dangerous.