Paul Jacob
|
Posted: Oct 21, 2018 12:01 AM
Share   Tweet
The opinions expressed by columnists are their own and do not necessarily represent the views of Townhall.com. 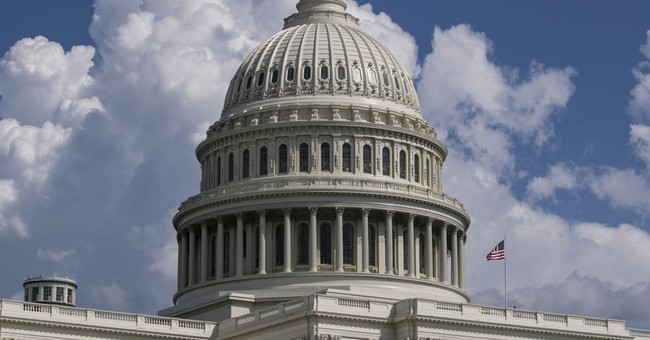 We have a choice: Govern ourselves or allow legislators and judges in our federal and state capitals to rule over us.

I much prefer the former. Give me a republic in which important individual rights have been constitutionally secured and democratic elections established.

In reality, that democracy part is as imperiled as our rights. Those fair elections, whereby we staff government and correct its course, too often prove hard to come by.

On Friday, the Arkansas Supreme Court struck Issue 3, a citizen-initiated measure to restore legislative term limits, from Arkansas’ November ballot. In a 4-3 ruling, the court declared there weren’t enough “valid” signatures, though even opponents do not dispute that more than enough Arkansas voters signed the petition.

The court is divided over the application of a slew of convoluted laws legislators have enacted in recent years. These electoral regulations were purposely designed to wreck the initiative and referendum process, providing a myriad of technical “gotchas” that can be used to disqualify whole sheets of bonafide voter signatures.

Arkansans have reserved in their state constitution the power to check these politicians by utilizing the ballot initiative. In fact, the constitution clearly states that “No legislation shall be enacted to restrict, hamper or impair the exercise of the rights herein reserved to the people.”

Yet the Arkansas court’s ruling ignores the clear wording of the state constitution, upholding these draconian violations by the legislature, and now dashes the public’s desire to vote for real term limits.

Why do the state’s term limits need restoration?

In 2014, “the legislature,” as former Governor Mike Huckabee recently explained, “sucker-punched the people of Arkansas and expanded their terms. They did it, I think, very dishonestly — by calling it an ethics bill . . . that had nothing to do with ethics. It was all about giving themselves longer terms.”

That lying 2014 ballot measure weakened term limits to a ridiculous 16 years. Since getting away with it, seven Arkansas state legislators have been indicted or convicted of corruption. The author of that tricky ballot measure, former Sen. Jon Woods, just began serving an 18-year federal prison sentence for corruption.

Other corruption, that is.

“It’s one reason I think term limits are a very important part of our political system today,” said Huckabee, citing the scandals. It is, he argued, “easier to get involved in things that are corrupt the longer you stay.”

Now, after 2014’s fraudulent ballot measure and two 4-3 state supreme court decisions neutering the entire ballot initiative process, political corruption can continue unabated in the Natural State . . . while citizens search for any rights they may have left.

And make no mistake, the hit to constitutional rights is quite direct. “This ruling does no less than strip Arkansans of their first right under the Arkansas Constitution,” stated Chad Pekron, the attorney for Arkansas Term Limits, “the right to petition the government.”

Meanwhile, just across the muddy Mississippi River from Arkansas, the Memphis City Council was caught employing a lobbyist to convince the state legislature to restrict the city’s power to use Ranked Choice Voting, which a supermajority of city voters passed back in 2008.

Take your pick of various descriptions for the council’s ballot language, from “incomprehensible” and “intentionally confounding” to “trying to stack the deck.” The term limits measure only asks voters to say yes to a three-term limit, without bothering to inform them that there is currently a two-term limit.

“These referendums and the condescending process that produced them are examples of the plantation mentality that has so plagued this city for so long,” wrote Dan Conaway at The Daily Memphian. “We the few — entitled as we are by the power of position, elected or appointed, or by the power of wealth and privilege and property, earned or inherited, or by the power of superior intellect, assumed or assigned, or increasingly by the power of the most aggrieved at the moment, or a combination of all of those arrogant conceits — know what’s best for the many, bless their hearts.”

Conaway concluded his column by suggesting voters say, “not no, but hell no.”

A few hours further east, Metro Nashville Councilmembers have placed a measure on the November ballot to weaken their own term limits. Note a pattern? It marks the seventh time the council has placed a measure to weaken or repeal their limits, since 1994 when three-fourths of voters passed the limits. Voters have said “no” six previous times.

This time the council has added a sweetener, an additional provision: new gender-neutral language to go with the gutting of term limits.

Tired of being sucker-punched, sucker?