Save The Wild Turtle

Paul Greenberg
|
Posted: Oct 10, 2017 12:01 AM
Share   Tweet
The opinions expressed by columnists are their own and do not necessarily represent the views of Townhall.com. 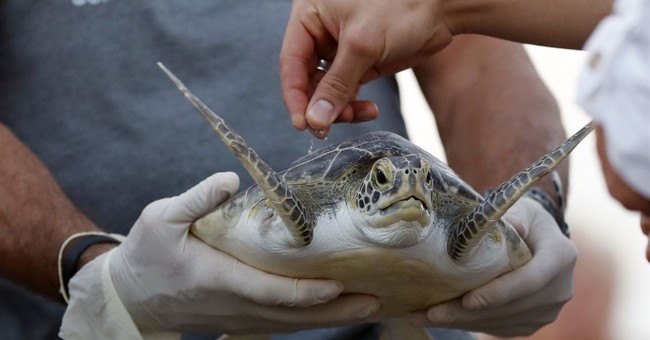 Allow me to add my decidedly inexpert voice to the chorus of conservationists that has spoken up for Arkansas' population of wild turtles. The impressive list of those petitioning the state's Game and Fish Commission to ban the trapping of these slow-moving, ever lovable creatures reads like a Who's Who of turtle lovers from all over.

At last report, the list included groups like the Center for Biological Diversity, the state chapter of the Sierra Club, Arkansas Water Trails Partnership, the Audubon Society of Central Arkansas, the Environmental Resources Center, and concerned citizens like Kory Roberts and biologist John Kelly. Your own name should be added to the list, Valued Reader.

"Arkansas' precious turtles shouldn't be sacrificed so a few trappers can make a quick buck," as an attorney representing the Center for Biological Diversity put it. For at the moment, the wild turtle is as endangered a species as the newspaper columnist that still writes for the print media instead of the electronic blogosphere.

By 2007, a decade ago, the Center for Biological Diversity had chosen 12 backward states for its rogues' gallery of jurisdictions that still allowed wild turtles to be trapped. But since then, states like Florida, Iowa, Oklahoma, South Carolina and Texas have joined the enlightened group that has limited trapping turtles for commercial profit.

This year, customers in Arkansas have purchased a total of 5,375 turtles from nine different species such as the common snapping, map, mud, painted, razorback musk, red-eared slider, river cooter, softshell and stinkpot. Who knew that the plodding turtle came in so many colorfully named varieties? Not me, to whom a turtle was just a turtle. Live and try to learn.

Happily, the worldwide market for wild turtles is in a slump at the moment and let's all hope it stays that way. More good news: Bill Posey of this state's Game and Fish Commission says wild turtles that used to be sent to Asian countries have been replaced there because those places are now capable of growing their own turtles in sanitary conditions. Which sounds like an ideal approach to the Great Turkey Question because everything "that they're harvesting from the wild could be grown on a farm. It's not necessary [or desirable, let's hasten to add] to fuel the market."

At this point it's hard to decide whether the turtles themselves or their picturesque names exert the greater attraction for a word lover like me. For there's also a western chicken turtle, the ornate box turtle and a three-toed box turtle as well as the alligator snapping turtle. What an embarrassment of linguistic riches.

Conclusion: Now is the time for all good men and women to come to the aid of their country's wild turtles. In a pinch the wild turtle also makes an excellent metaphor for a sensible American foreign policy. It protects itself with a solid shell of armament and sticks its neck out only after slowly and carefully investigating its surroundings to make sure no predators are out there in the market for turtle soup. Even as it makes slow, steady progress toward its long-term goal.

So long live the wild turtle, the very personification of safety first. May it continue to go on its lumbering way in peace, steady as she goes. If only the Union and the peace of the world were as stable and well protected.