Tell it to the Marines 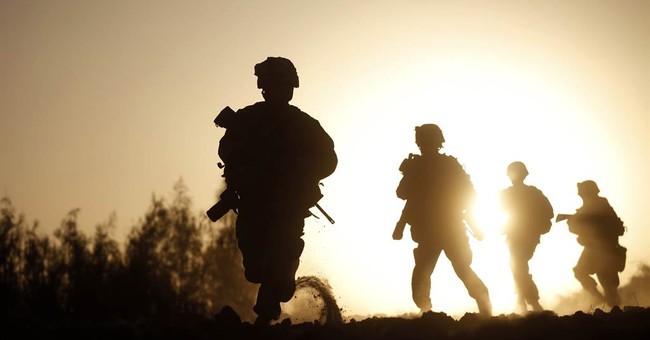 It was wholly a pleasure to be told again that there is no such thing as an ex-Marine or former Marine -- because once a Marine, always a Marine. The same principle applies to judges, physicians and military officers. Semper Fi and all that -- always faithful.

The phrase you object to appeared in an obituary tribute I paid to Punch Sulzberger, the late great publisher of the New York Times before it became an ex-great newspaper. Capt. Sulzberger always acknowledged the formative, even transformative, effect that the Corps had had on his life. Whether he considered himself a Marine or ex-Marine, I don't know. I suspect he had other things to think about.

But it's always good to hear an ex-Marine claim there's no such thing as one. It shows a certain esprit de corps. Lord knows the country needs as much of that spirit as we can still summon.

I grew up hearing the phrase, "Tell it to the Marines." Translation: "I don't believe you." Or maybe: "Quit your griping. It's not going to do you any good."

The phrase is said to have originated with the English -- so many English phrases do. (Which figures.) It was a reference to the Royal Marines. The full expression, complete and unabridged, is supposed to have been, "Tell it to the Marines because the sailors won't believe you."

Many a sailor today may not take the Marines' talk all that seriously, either. But talk isn't what gives the Marines their credibility. It's their actions. They don't need this business about there being no such thing as an ex-Marine to enhance their reputation. It's been well established since the Halls of Montezuma and, before that, the Shores of Tripoli.

The Marines also led the Chosin Few in Korea who broke through Chinese encirclement in the 17-day saga known as the battle of the Chosin Reservoir, turning sure defeat into heroic victory. ("Retreat, hell! We're not retreating, we're just advancing in a different direction."--Oliver P. Smith, General, USMC.)

That doesn't mean inter-service rivalry is dead. An ex-soldier named Harry Truman (Captain, U.S. Army Artillery, in The Great War) is better known as a president of the United States. Immune to the Marine Corps' glamour, he considered disbanding it. As he put it in his always direct, Harry S. Truman way: "The Marine Corps is the Navy's police force, and as long as I am President that is what it will remain. They have a propaganda machine that is almost equal to Stalin's."

Ooo-wee. Talk about a political firestorm. That was one fight HST lost. After the fierce reaction to his remark, the commander-in-chief decided that retreat was the better part of valor when dealing with the U.S. Marines. He apologized profusely, even attending a Marine Corps dinner to deliver his regrets in person. He also wrote the commandant of the Corps to express his admiration for "the magnificent history of the United States Marine Corps." He gave a whole new, apologetic meaning to the expression, Tell it to the Marines.

Mr. Truman wasn't the first Army man to find he needed the Marines. A general named MacArthur discovered they could come in mighty handy when the Army was struggling to establish a beachhead on Guadalcanal.

I heard my cousin Sammy, who's now in his 90s and senior cousin of the whole clan, talk about his wartime service as a GI just once. It was at his granddaughter's wedding. Weddings aren't just for celebrating but for exchanging confidences. That's when I learned he'd been on Guadalcanal. I'd never known that before.

He'd arrived with the reinforcements, and all he ever said about it, his voice sorrowful, reflecting both compassion and admiration for those who'd been through the worst of it, was: "Those boys went through hell."

Nobody had to sell him on the Marines. Sammy was never much of one for protocol, but courage and sacrifice he knew -- and respected.

In another war, after the North Koreans invaded the South in 1950 and threatened to overwhelm the whole peninsula, Gen. MacArthur pulled his broken ranks back to a small perimeter around the port of Pusan. The Marines would prove indispensable then, too.

Just where the U.S. Marines fit into the unified command has always been a source of confusion, even contention, from time to time. I remember my immigrant mother, always curious about all things American, asking my older brother in her uncertain English: "Irvink, I understand what the Army, the Navy and the Air Force do. The army fights on the land, the navy on the sea, and the air force in the air, no? But what do the Marines do?"

"Shock troops?" She was still mystified.

"Yeah, you know, shock troops. The advance guard. They go in, destroy everything in sight, and then the regular troops can follow."

Realization had dawned. Her pale eyes lit up with recognition. Her voice took on a respectful tone. Not unlike Mr. Truman's once he'd seen the light.