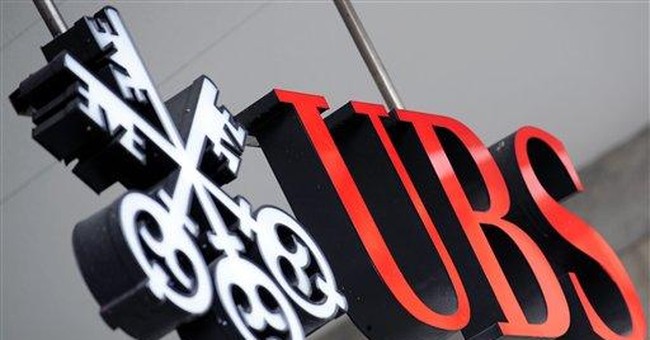 Ronald Reagan said it back in 1983: "Our federal tax system is, in short, utterly impossible, utterly unjust and completely counterproductive . . . (it) reeks with injustice and is fundamentally un-American . . . it has earned a rebellion, and it's time we rebelled."

But what politician today would speak so eloquently, and all too accurately, about the country's irrational, insufferable, infernal Internal Revenue Code? (Except maybe for purely ceremonial purposes during an election year.)

Those in Congress who have made distinguished careers sneaking tricky little passages into the tax code to favor the special interests they represent, or just hope to solicit for a campaign donation, aren't interested in undoing this elaborate trap for the average taxpayer.

Why would politicians seriously challenge a system that so richly rewards them for their expertise in an arcane specialty?

Lest we forget, and so many do, that this republic was born of a tax revolt -- indeed, a mounting succession of them that climaxed in the Spririt of '76. Gosh, maybe that's why they call it the Tea Party.

But we the people long ago lost touch with our Revolutionary, and still revolutionary, roots. We've become inured to the injustice, inefficiency and general incomprehensibility of an encyclopedic tax code that by now passeth all understanding.

A whole priesthood of CPAs has multiplied to translate this gnostic creed, with all its daunting commandments and special dispensations.

Most of us don't object to paying our taxes. Living in the United States of America is not only a blessing but a great bargain. What we object to, or should, is how hard, how complicated, how expensive and sometimes just how plain hopeless it is to try to figure out how much we owe.

Awash in a sea of paper, or rather an ocean of electronic impulses in this internetted age, the American taxpayer needs . . .

But every sweeping new tax law Congress enacts -- always called a "reform" -- makes reform only more complicated and, if possible, more confusing. And makes the tax code longer. By now, it has grown as indecipherable as Hammurabi's. It might as well be on clay tablets.

Despite the perennial foofaraw in Washington about whether and how much to cut taxes, what really drives people nuts is the paperwork, the record keeping, the uncertainty.

Even if folks have an accountant, and by now an estimated 80 percent of us use a tax preparer, or at least some software, to figure out how much we owe, it's still a wearing process.

For the average American family, filling out a tax form has become like attacking a puzzle to which, often enough, there is no right answer. But we're all supposed to swear, on penalty of perjury, that we've done our best to find it.

What to do? Don't mend it, end it. Abolish the tax code and start all over. Think about it: Would anybody starting from scratch come up with a system so byzantine, so counterproductive, so insane as the one we're stuck with? Well, maybe Rube Goldberg.

So why not opt for a clean break with the past?

Yes, kill the monster. Drive it through. Abolish the Internal Revenue Code and begin anew.

Put this thing out of its misery and the taxpayer's. By a date certain. Say, December 31, 2013. The government would have until then to come up with a simpler, fairer substitute.

At this point, it would be easier to junk the U.S. tax code and start all over than to fix it, and certainly to understand it.

To rephrase a thought from Dr. Johnson, nothing so wonderfully concentrates the mind as the prospect of having to file your taxes by midnight tonight. Or get an extension and so succeed only in prolonging the pain.

First kill the Internal Revenue Code, and the way to create a simpler, fairer system might become clearer to all those politicians, bureaucrats and other unimaginative types who now say it just can't be done. But it can be.

There is no time like the present to abolish the Internal Revenue Code. Which is pretty much what I wrote on Tax Day in 2004 and 2006 and 2008 ... and just about every year since. And now have said so again on this Tax Day.

Never. never, never, never give up. Don't believe those who can always be counted on to do nothing about even the longest-running outrages. Just abolish the old tax code and the politicians in Washington would have to devise a new, better, simpler one. From scratch. They'll want to get paid, won't they?