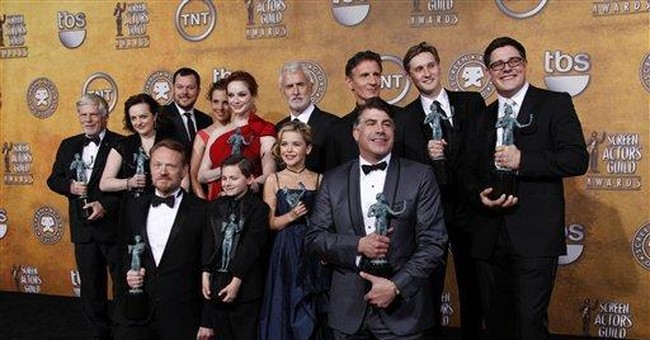 It's a hit of the television season -- again. What with Hollywood turning out one silly movie after another, the little screen is reasserting itself as the place to go for, if not serious drama, than the kind that rivets the viewer's attention between commercials. Much as "The Sopranos" did a few seasons back.

What keeps people tuning into "Mad Men"? Surely it's not the convoluted plots within plots. It's the acting -- especially Jon Hamm's -- and the re-creation of a particular time, place and culture: Madison Avenue in the early Sixties.

Something else is at work here, too, though it may not be easily spelled out. We tune in because once again the country is in the market for a new model of masculinity, as it regularly is. Fathers used to provide one, but sons being sons, they turn elsewhere, for what does dad know? So the movies stepped in to provide a succession of models for manhood over the years. The times they're always a-changin', and so did the models available on the big screen. We traded them in regularly, like cars.

Once upon a time, there was the strong, silent type. Gary Cooper. John Wayne. To show emotion, or at least any emotion besides cold anger, was considered effeminate. Then came the sophisticated charm of Cary Grant, which alternated with the aw-shucks, all-American appeal of a Jimmy Stewart. The cowboy hero remained a staple, but tough guys would appear intermittently: Steve McQueen, Charles Bronson....

Styles varied. There was no common denominator among these models. Except a cluelessness about women, which is the essential male trait in all places at all times. Women were to be captivated, not understood. Except perhaps by an Alan Alda, The New Male, the Sympathetic Male ... a model that, naturally enough, lasted no longer than the Edsel.

Now we get Don Draper, whom Jon Hamm brings to restrained life so convincingly that "Mad Men" could be to this generation what "Lonesome Dove" is to Texans. Or "Gone With the Wind" was to a generation or two of Southerners. That is, a depiction of a lost era so well remembered that perhaps it never was. Which is how nostalgia works -- and reworks mere reality.

"Mad Men's" Don Draper seems the epitome of the rigid, cool 1950s generation confronted by the unbuttoned Sixties, when everything that was forbidden, at least ostensibly, became not just permitted but just about mandatory. Mental health demanded it, according to the Freudian canon. No wonder so many of the characters on "Mad Men," caught between the equal but opposite requirements of two such different decades, are mad. In both senses.

But why are they so watchable? Maybe because this soap opera for men combines two of the most potent of appeals: nostalgia and fashion. Jon Hamm is clearly a fine actor, almost as expert as the set designers and costumers at invoking an era. They must all, actors and crew, have spent untold hours studying photographs, magazines, newsreels, and advertisements from that narrow-tie, in-between period, 1955-65. When Korea was over and Vietnam beginning. When cigarettes could still be smoked openly, and today's psychobabble was only in its insufferable infancy.

The not so fictive Don Draper is a fine combination of the savvy and (morally) stupid. When he walks out on a psychology-by-the numbers presentation by the Joyce Brothers character, it is a deeply satisfying moment. It makes you want to cheer.

In her one insightful moment, the cool picture-perfect psychologist calls Don the advertising firm's shaman, for he represents talent as opposed to those who, if they ever had any, traded it in long ago for promotion to administration. Art understands intuitively what science must struggle to misunderstand. So that when the psychologist responds to Don Draper's snub by dismissing him, saying something like, "We all like to think we're unique," she has no idea that we really are. Which makes her the perfect foil for his natural talent.

Time and again, Don declines to argue. At least not verbally. He doesn't have to. Not just because his face and manner are so eloquent of themselves, but because to respond to the petty would be below him, and below the intelligent viewer. So he sidesteps. ("What do you want me to say?") He makes his point without making it in words. Conflict isn't so much defused as declared at an end -- like hostilities in a war never allowed to break out. He is in control -- not of others but, more important, of himself.

Yes, there are also Don's unconvincing gaucheries -- as when he sells not only the product but himself, or acts like a swine. It's hard to believe or believe in him then. Maybe because at those points the scriptwriters have imposed this age's pop psychology on him, and he's no longer a model of masculinity but a contemporary version of some specimen out of Krafft-Ebing's "Psychopathia Sexualis." Or just a ploy when the writers resort to that most uncool of devices, sentimentality. That's when you realize you're just watching another soap opera.

The fictive Don Draper, unlike the cardboard figures who fill out much of the cast, has levels to his character. The only other character of any real depth may be the increasingly less naive copywriter Peggy Olson, a working-class Catholic girl from the pre-Vatican II era, when Catholics were still distinctive, set apart, different. She's different in "Mad Men" because she's the only character who seems capable of any kind of religious crisis. She makes you want to pray for her soul.

If there is a single theme to such disparate productions as "The Sopranos" and "Mad Men," a single theme that explains their hypnotic attraction, however different their settings, it may be dignity -- the struggle of humans to hold onto it in their own, often enough crazy ways.

In "Mad Men," that struggle takes place in changing social times as the characters try to preserve the best of themselves and discard the worst. But the human condition being what it is, we may wind up doing the reverse. Maybe it depends on the models we choose.