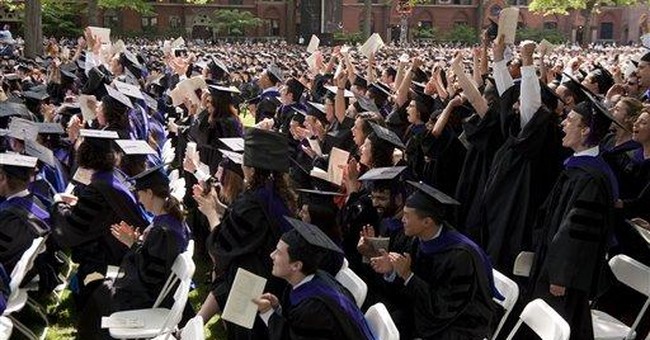 Yale University long has been a citadel of political correctness and a prime example of the current academic rage for deconstructing truth. But this time it's reached the bottom (let's hope) of its flight from Lux et Veritas, Light and Truth. It's getting so that the only remaining evidence of either one at Yale may soon be confined to its motto.

This time Yale's university press was about to publish a scholarly volume that would provide some historical and artistic context for those controversial cartoons that Danish newspapers published in 2005 and early 2006, including caricatures of the Prophet Mohammed, and that so enraged mobs throughout the Muslim world. Here, you would think, is just the sort of scholarly study that a university press ought to be publishing.

But the same forces that long have held much of the Muslim East in thrall, enforcing the most radical of Islamic prohibitions, now are reaching out to dictate to the West, too. And they've found a willing accomplice in Yale University, which now has decided to publish the book without including the principal reason for it: the cartoons themselves. The decline of the West has seldom been so pronounced as in the vicinity of New Haven, Conn.

This book was going to offer some needed perspective by including other drawings of Mohammed from centuries past. But it's not just the Danish cartoons that now have been excised from the manuscript but all the others. Despite their historical relevance to the topic at hand.

Among the works that didn't make it into the book: a 19th-century print by Gustave Doré illustrating Dante's "Inferno," another from a children's book, and even an old Ottoman print. All of those, too, were considered too hot for Yale to handle.

The moral of this sad story, or at least one of them, is that those afraid to publish commentary on contemporary issues will soon enough be driven to suppress the past, too.

George Orwell knew how this worked. (See how history was constantly being rewritten in "1984" by the Winston Smiths at the Ministry of Truth.) In the late and unlamented Soviet Union, the same games were played with history. And in Germany's Third Reich, it was Josef Goebbels who decided what the masses would be allowed to see. Or not see.

Yale University's obeisance to the same gods -- Fear, Repression, Brute Force -- will only grow if such appeasement is not challenged by those of us who still believe in freedom of expression.

One of the distinguishing marks of an American in the early years of the Republic was simple candor; he was a man unaccustomed to bowing and scraping before the old nobility of Europe. Or anyone else. But now Yale has bowed and scraped to the worst elements in the Islamic world, censoring these drawings lest the violent be offended. So much for scholarly integrity, academic freedom and just plain American freedom of the press.

Yale makes no bones about the reason for its decision to drop these works of art from the book. John Donatich of Yale University Press claims it doesn't shy away from controversy, and then in his next breath gives the lie to that brave claim by adding that, between publishing these works of art and risking "blood on my hands, there was no question."

There are so many things wrong with that statement, one scarcely knows where to begin, or end. But one of Mr. Donatich's misunderstandings is that the responsibility for any violence that follows an exercise of free speech falls on those exercising it, not those who commit the violence.

The violent of the Islamic world will only be given additional encouragement by Yale's yielding to their threats. It's not those who attack freedom directly who represent the greatest danger to freedom, but those who refuse to defend it. Or even exercise it. Even though they should be its most stalwart defenders, like those in charge of an institution of supposedly higher education.

It's not our enemies who present the gravest threat to Western civilization, but those who would give up their own freedom to appease the tyrants of the world.

Not only is Yale not publishing these pictures, it's not disclosing the identities of various experts it consulted who advised against publishing them -- "counterterrorism officials ... U.S. diplomats ... foreign ambassadors from Muslim countries ... and senior scholars from Muslim countries." Secrecy is the surest sign that an institution is ashamed of a decision it's made, and in this case has every reason to be.

Meanwhile, the experts who aren't afraid to speak honestly can only shake their heads over Yale's bow to know-nothingism. Reza Aslan, for example, is author of "No God But God: The Origins, Evolution and Future of Islam." He likes the book about the cartoons, but took back a blurb for it after Yale announced it was dropping the pictures that go with it. The book was intended, he notes, as "a definitive account of the entire controversy, but to not include the actual cartoons is to me, frankly, idiotic."

The book's author, Jytte Klausen, wasn't even allowed to see the objections that all those unidentified experts raised to publishing the art that goes with her book -- unless she agreed to sign an agreement promising not to disclose the objections. (She had enough self-respect not to sign any such agreement.) So not only will the pictures be censored but so will the reasons for their being censored. This is starting to sound like an absurdist play. Or maybe a security hearing during one of the more hysterical periods of American history, like Joe McCarthy's heyday.

As offensive as some of these cartoons may be, and political cartoons can be tasteless on occasion, they can't be nearly as offensive as the decision not to publish them in this country -- supposed land of the free and home of the brave -- for the most craven of reasons.

No wonder they say courage is the indispensable virtue. For without it, all the others are in jeopardy.

To quote the Washington Post's reaction to this betrayal of academic freedom and freedom in general, Yale should be ashamed of itself. That is much too generous an assessment; it assumes Yale's administration is still capable of shame.