Orders Are Easy to Give, Just Hard to Carry Out 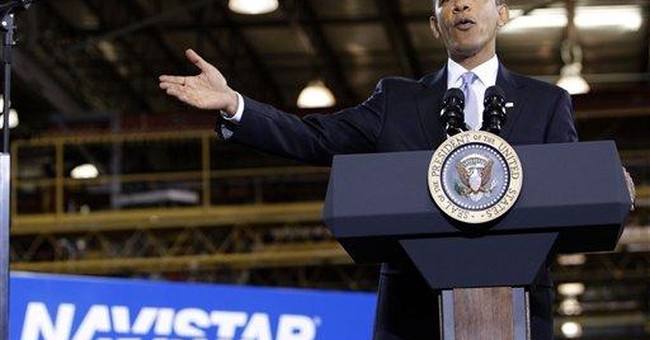 Harry Truman was said to have been in a philosophical mood -- he often was -- on leaving the White House as the most unpopular president since Herbert Hoover. It was January of 1953, the country was still at war in Korea, the Cold War could turn hot any minute, the shadow of The Bomb loomed over the planet, the state of the economy was as uncertain as ever, Joe McCarthy remained on the prowl for non-existent Communists in government, which meant the real ones might be overlooked ... and Mr. Truman had just turned over the reigns to a retired general named Dwight D. Eisenhower. (The impression that the 1950s were just one long episode of "Happy Days" was always more a product of nostalgia than fact.)

According to one story, HST looked back and, surveying all he was leaving behind for his successor to deal with, said something like: "Poor Ike. He's been in the Army all his life, where you can give an order and it's obeyed. He'll find it's different in the White House. He can give all the orders he wants, and nobody'll pay the slightest attention."

On his first day in the Oval Office last January, our still new president issued an executive order closing down the military prison at Guantanamo, where hundreds of the enemy in this never-ending war on terror (if we're still allowed to call it that) are being held.

With a stroke of his pen, Barack Obama had wiped out years -- indeed, centuries -- of military law that had once provided the country with a way of dealing with enemy combatants (we may not be allowed to use that term any more, either) through the well-established precedents of military law.

Suddenly gone were the old distinctions between legal and illegal combatants, and the military commissions that had traditionally dealt with both. The new president and commander-in-chief made it clear what he thought should be done with that whole, elaborately constructed legal structure:

The military commissions were canceled, or at least suspended. Guantanamo was to be shut down by presidential order. How simple it had all turned out to be.

Too simple. Just closing Guantanamo was always the easy part. That was the goal of the previous administration, too, which sought to achieve it over the years by releasing, relocating, expatriating and generally diminishing the number of prisoners held there -- despite the objections of those who cried Rendition! The now former administration continued to move prisoners out of Gitmo even as some of those released have had to be recaptured on the battlefield or have been caught in new terror plots.

Guantanamo's prison population had been reduced from 775 to 245 by the time Barack Obama took the presidential oath. But those detainees who remained included the hardest cases. And governments in their home countries were proving much too savvy to accept many of these clear and present dangers. Who can blame them?

What is now to be done with terrorists who freely admit their guilt, and even insist on "martyrdom," at least in their public statements and pleadings? Where are they to be held if Gitmo is closed? Or will they be held at all?

Shall the Khalid Sheikh Mohammeds be turned over to ordinary criminal courts in this country as defendants, with all rights and privileges pertaining thereto, at the risk of revealing the sources and methods of our counterterrorist operations in open court?

Shall the government proceed to stage a whole new series of circus trials a la that of Zacarias Moussaoui over the next couple of years or decades? Or should it seek willing executioners abroad? Or just forget the whole thing and hope for the best?

The president gave his answer to all such questions last January: Temporize.

A way to handle these tough cases, he said, would be found by the end of the year. And by now his administration has indeed come up with an answer, or rather a whole, conflicting slew of them. To quote a new story in the Washington Post:

"The administration is looking at transferring some detainees at the military prison at Guantanamo Bay, Cuba, to a facility in the United States that would contain courtrooms to hold federal criminal trials and military commissions to prosecute terrorism suspects. ... Officials said such a facility could also house prisoners held in indefinite detention and those cleared for release but who have no country willing to accept them. Those convicted in federal court or [by] military commissions could serve their terms there."

In short, the more the Obama administration studies the difficulties this president invited when he announced that Guantanamo would be shuttered, the more it comes to adopt the Bush administration's way of dealing with these hard cases.

It'll just be done at a different site -- one on the American mainland. (Which ought to make us all sleep more soundly.) Traditional military commissions are back and so is the policy of holding enemy combatants, if by another name, until hostilities are concluded, if they ever are.

To sum up, Gitmo is just being moved ashore.

But there is at least one difference between the way this administration has approached this issue and how its predecessor did. For all the civil liberties its critics claim the Bush-Cheney administration was threatening when it set out to crush al-Qaida at home and abroad in order to prevent another September 11th, it never moved to incorporate a system of preventive detention without trial -- the hallmark of every totalitarian regime -- into American criminal law.

So there is indeed a big difference between the Obama and Bush administrations' approach to this challenge. And it's a chilling one.