Patrick Hedger
|
Posted: Dec 02, 2020 10:00 AM
Share   Tweet
The opinions expressed by columnists are their own and do not necessarily represent the views of Townhall.com. 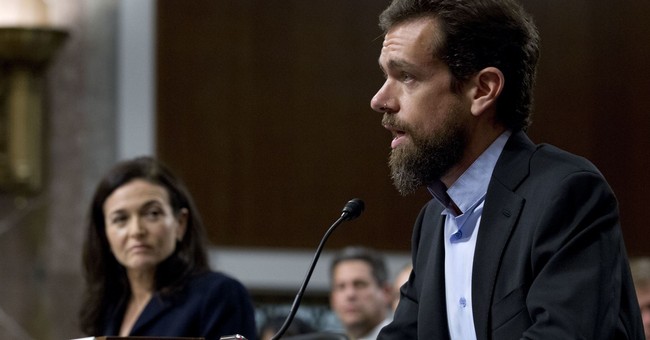 For those policy wonks rightly focused on turkey, football, and family this Thanksgiving, they may have missed President Trump’s latest Twitter musings in the waning hours of the holiday. Shortly before midnight, the president tweeted, “For purposes of National Security, Section 230 must be immediately terminated!!!” The President is referring to the law that shields tech companies from liability for certain content posted by third parties.

At first glance, it’s easy to dismiss this on a number of grounds. This certainly wouldn’t be the first time a late-night Twitter rant by the president bore no actual policy fruit. It is also a favorite trope of Washington lawmakers to hide every policy stance behind the veil of national security, whether or not it even makes any sense. We were also told it is a straw man argument to say anyone on the right wants to repeal Section 230.

However, it has become increasingly clear that this fear is anything but a straw man. The president’s threat is very real and may have backing from other policymakers in Washington. Reports are that the administration is pressing legislators to include Section 230 repeal in the upcoming must-pass National Defense Authorization Act (NDAA). To put it mildly, if this gambit succeeds it would be an unmitigated disaster for the future of the internet and – ironically enough – national security.

This used to be something the Trump administration understood. In fact, the administration made it a condition of a number of trade deals that foreign countries adopt protections similar to Section 230. A year ago, they knew this liability shield was crucial to keep U.S. tech companies thriving and competitive and to prevent Chinese tech giants from gaining unrivaled global supremacy.

This has been an ongoing struggle for the Trump administration, which has postured itself as being “tough on China” in most all policy areas. The battle for worldwide technological primacy will also loom large over the next administration. It’s no secret that the largest tech firms in the world are generally either based in the U.S. or China. However, during this transition period, the Chinese regime is doing everything it can to boost its tech companies, while the Trump administration has decided to declare war with American tech giants on its way out the door.

Hamstringing U.S. tech companies in this way would cede the future of internet governance to a nation that routinely censors political dissent and has an abhorrent history when it comes to human rights. If Republican senators are concerned about online censorship, they should consider this reality before embarking on any more ill-advised crusades against people like Mark Zuckerberg and Jack Dorsey merely because they dislike the political affiliations of their staff.

Others have proposed including more ostensibly reasonable approaches to Section 230 into the NDAA instead of a full repeal. Most of these proposals impose some standard of neutrality for tech companies – a standard not even imposed by the authors of Section 230. In other words, tech companies will only be afforded critical legal protections if they limit their supposed censorship to certain kinds of speech. As is always the case, government dictating best practices to private companies will have unintended consequences and backfire greatly.

This will likely lead to Twitter and Facebook dedicating more resources to censorship, as opposed to fewer. If these companies are forced to walk a fine line on content moderation, anything that could be potentially libelous becomes an issue and will be taken down. Also, smaller competitors online will not have the resources to comply. Such regulations will entrench the consolidation lawmakers claim to abhor.

This all goes without mentioning the fact that the First Amendment undoubtedly prohibits such legal favoritism in the realm of protected speech.

If America wants to achieve global tech dominance and prevent the despotic regime in Beijing from achieving the same, it needs to maintain the hands-off regulatory approach that created such a vibrant web in the first place. Petty and constitutionally questionable disputes with tech companies will only leave American companies without protections they need to continue competing globally. This is the antithesis of national security and such proposals need to stay far away from this year’s NDAA.

Patrick Hedger is the Vice President of Policy for the Taxpayers Protection Alliance.