Pat Buchanan
|
Posted: Feb 10, 2016 12:01 AM
Share   Tweet
The opinions expressed by columnists are their own and do not necessarily represent the views of Townhall.com. 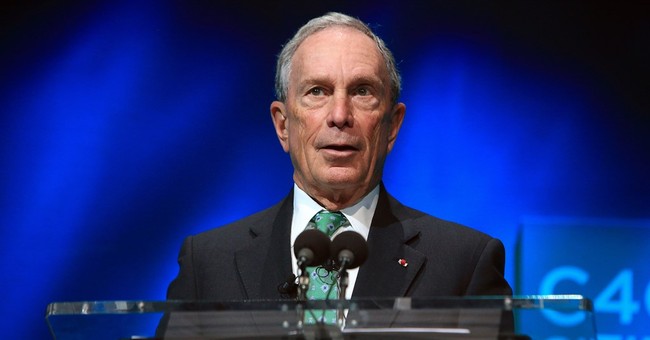 The morning of the New Hampshire primary, Donald Trump, being interviewed on "Morning Joe," said that he would welcome his "friend" Michael Bloomberg into the presidential race.

Which is probably the understatement of 2016.

The three-term mayor of New York and media mogul whose fortune is estimated at $39 billion, making him one of the richest men on earth, told the Financial Times on Monday he is considering a run.

Bloomberg had earlier confided he was worried about Hillary Clinton's ability to turn back the challenge of Bernie Sanders, regards Trump's rise with trepidation, and is appalled by the pedestrian character of the campaign rhetoric.

"I find the level of discourse and discussion distressingly banal and an insult to the voters," said Bloomberg; the public deserves "a lot better."

This haughty disdain calls to mind the late Adlai Stevenson. Yet, if Bloomberg runs, his electoral vote tally would likely make Adlai, by comparison, look like Richard Nixon on his 49-state romp in 1972.

Republicans should give Mayor Mike every encouragement to enter the race. For though he threatens to spend a billion dollars of his own money to buy the presidency, his name on the ballot as a third-party candidate could send the Democratic nominee straight down to Davy Jones's locker.

With Bloomberg siphoning off millions of liberal votes, Democrats would not only lose red states they customarily write off, winning solid blue states would require a far steeper climb.

Third Party candidates have played crucial roles in presidential politics. Ex-President Theodore Roosevelt killed the re-election hopes of his successor President William Howard Taft in 1912, by running as the Bull Moose candidate and delivering the nation to Woodrow Wilson.

Why would Bloomberg, who has great wealth and is willing to part with it, not be able to beat Trump, or another Republican nominee, if he plunged a billion dollars into his campaign?

Though he may be a pioneer in modern media and a man with a golden touch, Bloomberg is 74 years old this week, uncharismatic, and does not fill up a room the way the Donald does. He lacks a common touch and is a social liberal, pro-abortion and pro-same-sex marriage.

Moreover, he is a compulsive nanny-stater who outlawed smoking in New York bars, restaurants and public places, prohibited the sale of cigarettes to anyone under 21, forbade trans-fats in restaurants, sodas larger than 16 ounces, chain restaurant menus without calorie counts, cellphones in school, non-fuel-efficient cabs, greenhouse gas emissions, and non-hurricane-proof buildings in coastal areas.

While not well-known nationally, Bloomberg is a zealot about tougher gun control laws and his candidacy would produce a deluge of contributions to the National Rifle Association. This obsession, along with his social views, would sink him in Red State America.

Nor is Bloomberg, despite three straight victories running for mayor, a great political athlete.

In his last race, as the Republican and Independent candidate, Bloomberg spent $102 million to defeat an underfunded Democrat comptroller, but managed to win only 51 percent of the vote.

If Clinton, or even Sanders, were at the top of the Democratic ticket in New York State, either would crush Bloomberg in his home town, especially with the GOP nominee, say Trump, siphoning off all of the Republican-conservative votes Bloomberg received to become mayor.

Now only would Bloomberg lose the Big Apple, his statewide vote would come mostly from the Democratic nominee, giving Republicans the best opportunity to carry the Empire State since Ronald Reagan coasted to re-election in 1984.

By spending a billion dollars, Bloomberg could blanket the nation with ads. But once Republican oppo research groups defined him for Middle America, perhaps 4 in 5 of his votes would come out of the basket upon which Democrats rely.

For example, as a Jewish-American, Bloomberg might do well in the Dade-Broward-Palm Beach County corridor, taking votes that Clinton or Sanders would need to carry Florida. Yet, where would Bloomberg get the rest of his votes to win the Sunshine State?

Clearly, Bloomberg is envious of the success of the Donald, since he descended on that escalator at Trump Towers on June 16.

The problem for Bloomberg is that, while this is the year of the outsider, with populist revolts breaking out in both parties, Sanders and Trump caught the lightning early, while he was restructuring his media empire. And, to be candid, Michael Bloomberg is no barn burner.