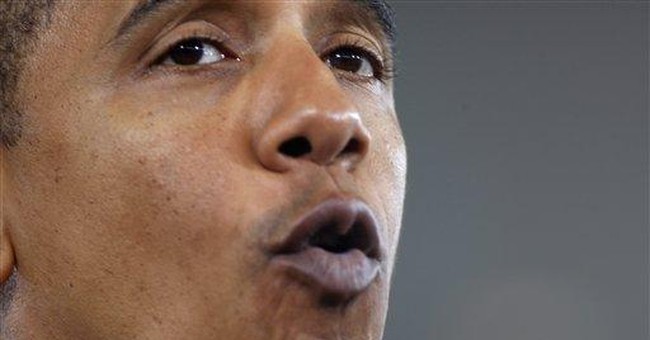 WASHINGTON -- The U.S. dollar isn't the only currency headed to new lows. After months of drifting along in "the winds of change," America's diplomatic credibility is sinking alongside the greenback. The Obama White House and the so-called mainstream media -- preoccupied with hoopla over "health care reform," meaningless drivel about the 2016 Olympics and the vacuous award of a Nobel Peace Prize -- barely have noticed the water flooding into our ship of state. Unfortunately, the Iranians, North Koreans, Russians and the Taliban all have been paying attention. Don't count on any of them to help bail out our boat.

On Sept. 17, less than a week before he was scheduled to deliver his Utopian "world without nuclear weapons" speech at the annual U.N. General Assembly seance, Mr. Obama announced that he was abandoning plans for ballistic missile defense installations in Poland and the Czech Republic. Commentators around the world drooled all over themselves commending the move as a step toward building "a new era of respect" and noting that the "initiative" would be "welcomed in Moscow."

Mr. Obama's presentation to the assembly Sept. 23 and his speech to the U.N. Security Council's summit on "nuclear non-proliferation and nuclear disarmament" Sept. 24 were celebrated for their "breadth and understanding" and his "appeal for dialogue in the quest for world peace." But the O-Team's careful choreography collapsed just hours later, when Iran's secret uranium enrichment facility, buried in the mountains near the holy city of Qom, was exposed.

In the aftermath, it was revealed that Mr. Obama had known about the site since January. When asked why he failed to mention the Iranian malfeasance in both of his U.N. addresses, a White House spokesman said the administration didn't want "to spoil the image of success" during Mr. Obama's debut at the U.N.

Of course, the problem isn't "image"; it's reality. And the reality is that the Iranian pursuit of nuclear weapons has continued unabated for at least a decade. U.S. intelligence confirmed that Tehran was building its underground enrichment facility at Nantez in early 2002. Since then, the U.S., the Europeans and the U.N.'s toothless International Atomic Energy Agency have been aware that Iran has continued to build multiple centrifuge arrays for refining "weapons-grade" nuclear material. An arms-control scientist says the facility at Qom probably can produce "sufficient fissile material to produce one or two multi-kiloton-yield nuclear weapons per year."

The Qom revelation prompted what appeared to be a new consensus for united action against the Iranian regime. French President Nicolas Sarkozy went so far as to say: "I support the Americans' outstretched hand. But what did the international community gain from these offers of dialogue? Nothing."

In the U.S., Democrats, long opposed to confronting Iran, appeared to set aside their internal divisions over health care reform to howl in unusual unison. House Speaker Nancy Pelosi, long admired for her pacifism, ominously warned: "An Iran with nuclear weapons is simply unacceptable. ... We must use the tools at our disposal -- from diplomacy to sanctions -- to stop Iran's march toward nuclear capability."

Even the Iranians suddenly appeared to be more pliant. On Oct. 1, at a much-hyped meeting in Geneva, Tehran's nuclear negotiators sat down with U.S., British, French, Russian, Chinese and German officials to discuss "continuing activities within the framework of the Non-Proliferation Treaty." There the Iranians agreed that in exchange for Russian "enrichment of nuclear material for electrical generation," they would sit down for another chat in Vienna on Oct. 19 and "invite" International Atomic Energy Agency inspectors to visit the previously undisclosed Qom enrichment facility Oct. 25.

Now we know it was all for show. On Oct. 9, cleric Mojtaba Zolnour, Supreme Leader Ayatollah Ali Khamenei's representative to the Revolutionary Guard, said, "Should a single American or Zionist missile land in our country, before the dust settles, Iranian missiles will blow up the heart of Israel." Then on Monday, Oct. 12, Iranian Foreign Ministry spokesman Hassan Qashqavi said: "We have announced repeatedly that our nuclear rights are not negotiable. Threats and sanctions are useless."

It's not just the Iranians who are doing damage to the Obama "image." On Tuesday, Oct. 13, Secretary of State Hillary Clinton met in Moscow with Russian Foreign Minister Sergey Lavrov to discuss a new Strategic Arms Reduction Treaty and the "Iranian nuclear problem." Afterward, Lavrov told the press, "Threats, sanctions and threats of pressure in the current situation, we are convinced, would be counterproductive."

That's reality. And to make sure the O-Team got the message, on Wednesday, Russian Prime Minister Vladimir Putin, speaking from Beijing, added: "If we speak about some kind of sanctions now, before we take concrete steps, we will fail to create conditions for favorable negotiations. We believe that we should treat this issue with caution, and there is no need to scare the Iranians."

Mr. Obama has trotted the globe burnishing his image -- and apologizing for America. He already has visited 16 countries. Next month, he will visit four more. He's already the legitimate winner of the "Most Traveled President Award." It's time for him to face reality -- before it is too late.