Nuclear Power Is Crucial To Our National Security

Nick Lindquist
|
Posted: Jun 15, 2020 12:01 AM
Share   Tweet
The opinions expressed by columnists are their own and do not necessarily represent the views of Townhall.com. 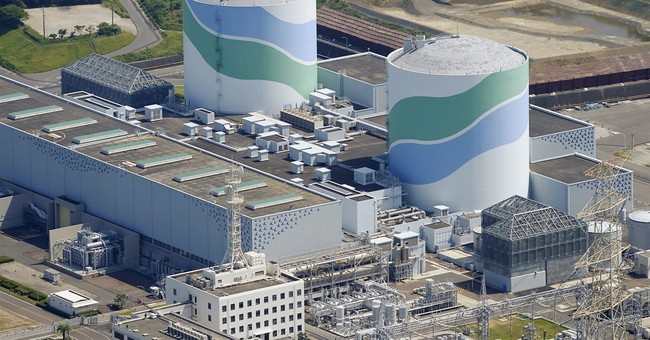 The world is facing a time of great uncertainty. Amidst a pandemic, a global recession, and immense civil unrest, we are seeing global democracy also come under attack. China is using the current state of the world as an opportunity to continue their imperialist prospects by cracking down on the formerly autonomous city of Hong Kong and creeping into India.

The EU has been reluctant to condemn China for its actions in Hong Kong and its role in allowing COVID-19 spread. This leaves the United States with great responsibility, standing as the lone maverick against despotism. The question now becomes: what can we do and how do we protect ourselves? A huge part of the answer is energy independence, particularly a stable nuclear power supply.

Nuclear power is all around an incredible energy source. For one, it is very scalable, accounting for about 20% of the nation’s energy supply. This is due to the immense power produced each time a plant is fired up. One single uranium fuel pellet is capable of providing as much power as one metric ton of coal or 17,000 cubic feet of natural gas. This also makes nuclear the perfect energy source when disaster strikes and the grid needs more power. Furthermore, nuclear power emits zero CO2 to produce, making it the largest clean energy source in the country. In addition to these baseline benefits, we need a stable supply for our navy operations.

The Navy currently operates 101 nuclear reactors that power our aircraft carriers and submarines. Due to the concentration of fuel in each uranium pellet, ships can operate for 20 years without refueling. This gives us an unprecedented advantage on the seas. This advantage helps keep America, and much of the world, safe from the perils of oppressive regimes and bad actors.

Unfortunately, this key advantage is at risk of being lost. The pandemic and recession have only weakened our commercial nuclear energy suppliers and many will be on the brink of shutting down soon. The breakdown of the commercial nuclear energy industry threatens our Navy’s access to research, development, and uranium fuel. This is occurring while China and Russia are in the process of ramping up their nuclear energy industries. To make matters worse, our uranium supply chain is deeply problematic.

Most of the uranium fuel supply for nuclear reactors in the US came from domestic sources in the late 1960s and early to mid-1970s. Since then, however, the amount of domestically sourced uranium has been on the sharp decline and today it accounts for only a fraction of our supply. Though much of our uranium fuel comes from stable democracies like Australia and Canada, there is still a good portion coming from Russia and China.

It is clear that we must reinvigorate the commercial nuclear energy sector and rethink the way we obtain uranium. For starters, we can remove the archaic and overbearing regulatory barriers that are currently in place that don’t provide a net societal benefit. For example, regulations should be based on calculated risk and safety rather than arbitrary numbers like they are based on today. No nuclear project should take over a decade to approve.

Additionally, the Department of Energy should fulfill their contracts dating back to the 1990s with energy companies and begin collecting nuclear waste in a national repository. Because the DOE failed to do so, temporary storage of nuclear waste costs the taxpayers $2 million per day, making the national repository the most economical action for both energy companies and the taxpayer. The government should also embrace public-private partnerships to carry out important advanced nuclear research in order to meet the needs of both the public and private sectors.

Lastly, we need to obtain our uranium more responsibly and establish a national uranium stockpile. By authorizing more domestic uranium development and obtaining the rest from allies like Canada and Australia, we will shrink the global influence of countries like Russia while also ensuring our national security interests are addressed.

Nuclear power is crucial to our national security interests. Without it, we lose military strength and weaken American energy dominance. Scaling back regulations, reestablishing the national nuclear repository, and obtaining responsibly sourced uranium will translate to renewed investor confidence in nuclear power. Investments in nuclear power in the private sector will revitalize our commercial nuclear energy industry and, in turn, allow our Navy to retain their major advantage.

The United States is exceptional. We need to protect it for generations to come by embracing nuclear power again.