Is There a Connection Between the Left's Enthusiasm for Protest-related Violence and for Voting By Mail?

Nicholas Waddy
|
Posted: Jun 30, 2020 9:01 AM
Share   Tweet
The opinions expressed by columnists are their own and do not necessarily represent the views of Townhall.com. 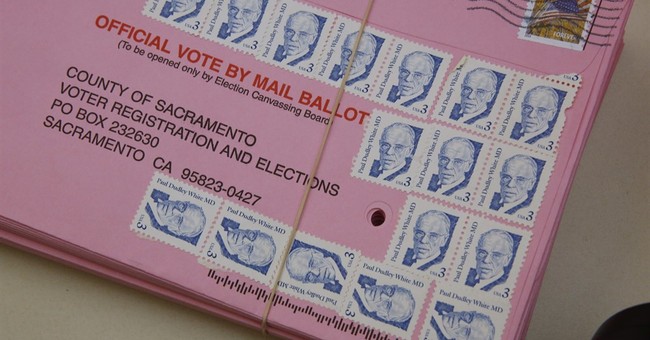 Americans need to start asking: could the Left be looking to replicate its stranglehold on higher education — obtained through years of intimidation and persecution of moderates and conservatives — on the national level? Will the stifling orthodoxy of “wokeness” at Berkeley, Harvard, and Vassar become the norm everywhere? Will even our democracy succumb?

There are signs that it could happen.

In recent years, leftists have enjoyed numerous successes in exerting power over academia. They have done so partly by dominating the ranks of administrators and professors, but also through the adoption of highly aggressive tactics: marches, sit-ins, boycotts, harassment on social media, disruption of speakers, attacks on statues, buildings, and other infrastructure, and occasionally direct physical violence against conservatives and free-thinkers.

One might expect that such anti-social and anti-democratic methods would cause higher ed's leadership to bristle with outrage and to resist related calls for “reform”. One would be wrong. The trend instead has been to placate the forces of anarchy and extremism. Time and again, the bourgeois Bolsheviks on campus have been rewarded for their lawless agitation. Colleges and universities have altered curricula, created new majors, built new dormitories, invented new scholarships, segregated graduation ceremonies, hired and fired administrators and professors, renamed buildings, and removed time-honored statues and memorials — all to keep the left-wing mob at bay.

These zealots aren't stupid: they howl and they smash precisely because they know that it works.

The violence and disorder that has washed over urban America in the last month is, among many other things, an exercise in transposing the aggressive tactics that the Left has employed to browbeat academia to the arena of mass politics and popular culture. Hurling rocks and setting stores on fire are only the bluntest instruments in the Left's arsenal, moreover. Not by accident, the mailed fist has been coupled with more intimate forms of coercion. The slightest deviation from the party line of cringing subservience to the agenda and rhetoric of Black Lives Matter has earned those foolish enough to voice it the white-hot animosity of the Left, in addition to swift punishment in the form of social media shaming, loss of employment, death threats, etc.

If the current attitude of celebrities, corporate leaders, and politicians — Republican and Democratic — is any indication, the tactics of intimidation are working. Not only are most sensible people avoiding any criticism of BLM as a movement, and of the protesters and rioters more generally, but they are also making haste to show their support for the cause, lest the forces of righteous indignation swallow them whole.

While the successes of the Left in strong-arming the American people are undeniable, and while the resistance to and condemnation of such coercive tactics has been almost entirely absent, especially among Democrats, the most important thing now is to ask: where does all this go? What will liberals' next step be?

Surely, the ultimate prize for the Left is the permanent and total conquest of political power. Could their well-orchestrated campaign of intimidation on campus, and now in the streets of our biggest cities, provide a model for how to achieve their most cherished goals of all: the silencing of dissent in toto, and the obliteration, once and for all, of the Republican Party?

Consider that liberals are, in addition to rioting in the streets, calling for the transformation of American and Western democracy. They claim (disingenuously) that “voter suppression” is taking place on a massive scale, and that minorities, who are actually voting at record levels, are routinely denied their democratic rights.

Their preferred solution? Eliminate all I.D. requirements for voting, expand voting rights as widely as possible, and make voting easier, by allowing people to vote when they wish and by mail or online.

Consider also, however, that the secret ballot is the keystone of modern democracy. Ever since the 19th century, advocates for democracy have understood that merely giving ordinary people the right to vote changes very little, when an “ordinary Joe” can be browbeaten by agitators, by his employer, by his landlord, by clerical or political authorities, or even by the secret police, into supporting whomever the elite prefers.

The Left, however, wants to jettison the secret ballot and allow “ballot harvesting,” whereby activists visit people's homes, provide them with ballots, assist them in filling them out (“correctly”), and deliver them to the Board of Elections! And liberals actually scoff at the idea that any form of “fraud” could flourish in such a political environment. Ha!

Does anyone believe that Donald Trump would have won the 2016 election if each voter had to announce his vote publicly? No, certainly not. The powers-that-be had made it very clear that only a “deplorable” would support Trump. And yet he won, in one of the greatest blows for government-by-the-people that has ever been struck.

My strong suspicion is that the Left intends to ensure, by blanketing America with intimidation and by demolishing the secret ballot, that similar surprise election results will never recur. They will do it by terrorizing and manipulating the voters, in the same way that they have already terrorized and manipulated university presidents, deans, and professors. Vote-by-mail is a means to that end.

Beware, America! So far the left-wing mob has merely frightened you. If you are not very careful, however, it will do far worse, and it will take far more.

Just as many institutions of higher education have been left with nothing but the tatters of liberal learning and free thought, so America might be left with only the husk of a democracy. Meanwhile, the thought police will reign supreme, while the real police — those alleged super-racists — will be as cowed and helpless as the rest of us.