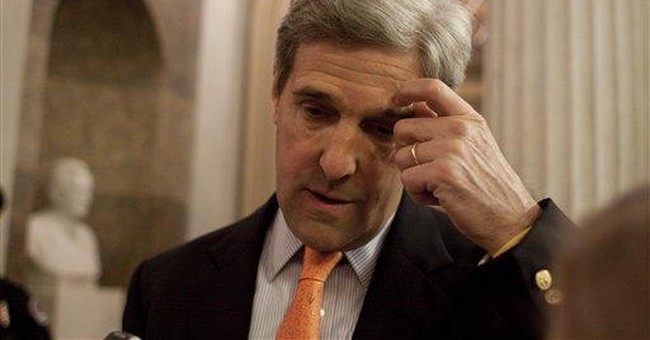 Since the close call on Christmas Day, when a Northwest Airlines flight’s crew and passengers almost fell victim to a Jihadist from Nigeria, the Democrat Party leadership including President Barack Obama, Speaker of the House Nancy Pelosi, Senator John Kerry (still fuming over his loss to George W. Bush) and Representative John Murtha are all onboard for the war on terrorism.

At least for now, gone are the days of euphemisms created by the Democrats to avoid something most American kids know: We are fighting a global war on Islamofascists abroad and their dangerous Fifth Column within the continental US.

So before you allow these politically motivated pseudo-patriots to fill your head with their war plans, commentary about military matters and other nonsense, remember who these people are and what they’ve said whenever they dropped their guard.

Jimmy Carter
While no longer a politician of any consequence, recall that when then-President Carter ran for re-election, American voters couldn’t wait to send him packing from the White House. When Carter took office, one of the first things he did was to throw our ally, the Shah of Iran, under a bus. When radical Muslims captured our embassy in Tehran and held our fellow Americans hostage, Carter dithered and dodged and made a feeble attempt at a rescue that made the Keystone Cops look efficient. Ronald Reagan whipped Carter in the 1980 Presidential race, and while Reagan will always be remembered as one of the great US presidents, Mickey Mouse could have beat Carter after his one-term performance.

Bill Clinton
It’s been said that Bill Clinton talks a good fight. In Somalia, he ordered US troops to cut-and-run. When Islamic terrorists attacked the USS Cole, he made a tough speech, but nothing else. When Islamic terrorists bombed the World Trade Center in 1993, the Clinton administration treated it as if it were a bank robbery. The bombing of two US embassies garnered an FBI dog-and-pony show. In fact, according to then-FBI director Louis Freeh, when Saudi Arabia’s Kobar Towers was bombed by terrorists and Freeh wished to send FBI agents to investigate the deaths of the American victims, Clinton instead telephoned the Saudi authorities and hit them up for a big donation for the Clinton Library. Most clear-thinking Americans believe that Clinton’s inaction in response to a string of terror attacks laid the foundation for the 9-11 attack. But he did give some great speeches. Just ask the folks at the New York Times.

John Kerry
The perpetual Senator from Massachusetts ran against President George W. Bush, and even some Democrats found it difficult not to giggle at his flip-flops and flubs during his campaign. The man was exposed as a “legend in his own mind” by the Swift Boat Veterans who revealed the truth about Kerry’s four months in Vietnam. They also exposed his fabrications and false accusations during his anti-war career. More recently, Kerry accused US soldiers of terrorizing Iraqi women and children in the dark of the night. And then there was his statement to a group of students that they should stay in school and get a good education or else they’d end up as soldiers in Iraq.

John Murtha
Dubbed a “hawk” by the Democrat Party spinmeisters, Congressman Murtha was the darling of the anti-war news media – at least for a time. Murtha’s statements were quoted repeatedly and then discarded when they were proved wrong. For example, he said our military was broken. Then he said we could not win in Iraq. Before any investigations or courts-martial, he said a group of US Marines were cold-blooded murderers. When the Marines were found innocent of any wrongdoing, Murtha moved on without any apology. While the reporters at the New York Times, Washington Post and CNN touted him as a military expert, he advised military leaders to redeploy to Okinawa and respond to violence with air missions.

Dick Durbin
Senator Dick Durbin is another perpetual lawmaker who every so often lets his guard down and utters statements that reveal his true character. For instance, on the floor of the US Senate, Durbin accused soldiers deployed as guards at the terrorist detention center in Guantanamo Bay, Cuba of being Nazis. He described the facility as a Soviet gulag. He went on to invoke the name of a man who murdered millions of Cambodians – Pol Pot. Of course, he was forced to apologize, but the apology was more of a slap in the face of many American patriots.

President Barack Obama
It is difficult to chronicle President Obama’s “unpatriotic” statements since he utters them almost on a daily basis. For months during his administration words such as “terrorism,” “terrorist,” “war” and others were kicked to the wayside. His appointments also display a total disregard for what made ours a great nation. Avowed Marxists, Maoists and socialists populate his administration and push their agenda behind closed doors. He said police in Cambridge acted stupidly before even knowing the facts of the incident involving his professor friend. However, after a Muslim murdered 13 men and women on a US Army base in Fort Hood, Texas, Obama stated he did not wish to comment until all the facts were at his disposal. While calling for unity, Obama has used vitriolic language to describe anyone who disagrees with him or his policies and ideas. Yet, while the members of the news media and entertainment industry hated George W. Bush, they adore and practically worship Barack Hussein Obama.

When the Secretary for Homeland Security compiled a memorandum regarding extremists in the United States, Secretary Janet Napolitano’s finished product described returning war veterans, pro-life activists, gun-control opponents and those opposed to big government intrusion into the lives of Americans.

Are these Democrats patriots or hypocrites?