Mona Charen
|
Posted: May 04, 2018 12:01 AM
Share   Tweet
The opinions expressed by columnists are their own and do not necessarily represent the views of Townhall.com. 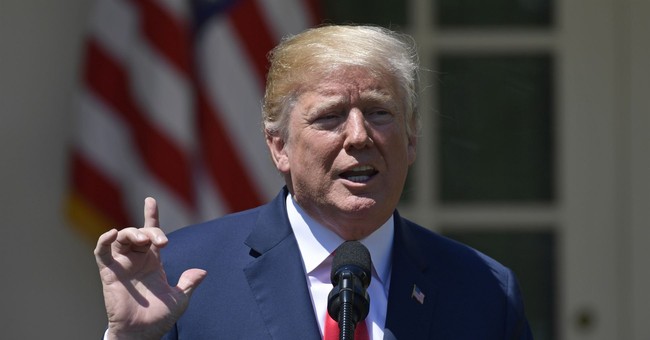 If President Donald Trump's incendiary threats have actually frightened the "dear respected comrade" Kim Jong Un into laying down his nuclear arsenal, he will deserve the Nobel Peace Prize his fans are demanding. But the suits in Oslo might want to hold off before awarding another premature Peace Prize to an American leader.

One expects the press to swoon whenever a blood-drenched tyrant smiles and shakes hands with a democratic leader, and they played their part this time. After Kim's announcement that he was suspending the nation's nuclear testing, CNN's Will Ripley gushed to Wolf Blitzer: "This is an extraordinarily significant development, and frankly a huge win for President Trump going into these discussions, this potential summit, with North Korean leader Kim Jong Un." Trevor Noah softened his anti-Trump tone, saying, "I know our first instinct is to hate, but if it wasn't for his craziness, North Korea would never have come to the table." And Sen. Lindsay Graham enthused that if President Trump "can lead us to ending the Korean War" while "getting North Korea to give up their nuclear program" in a verifiable way, then "he deserves the Nobel Peace Prize and then some." South Korea's president said the same.

With characteristic modesty, Trump tweeted: "With all of the failed 'experts' weighing in, does anybody really believe that talks and dialogue would be going on between North and South Korea right now if I wasn't firm, strong and willing to commit our total 'might' against the North. Fools, but talks are a good thing!"

Perhaps it's relief after the unsettling exchange of schoolyard insults and nuclear threats between Kim and Trump, but it seems that people are rushing to declare that something momentous has been achieved when we have no reason to believe that, yet.

Even the most hawkish must always remain open to the possibility of real change in an adversary. Mikhail Gorbachev was a different kind of Soviet leader, and it was wise of Margaret Thatcher and Ronald Reagan to recognize that. Anwar Sadat was sincere in his desire to make peace with Israel (though, sadly, he paid for it with his life). South Africa's President F. W. de Klerk dismantled apartheid and agreed to majority rule.

It's possible that Kim Jong Un is such a figure, but it is more likely that he is following in the well-worn path of his father and grandfather: Fire off some missiles or attack South Korea's military installations, and then make solemn promises to reform. Cash check in the form of concessions from the West. Oh, and then cheat.

In 1991, North Korea signed a joint declaration endorsing the "denuclearization" of the Korean peninsula. Both sides promised not to "test, manufacture, produce, receive, possess, store, deploy, or use nuclear weapons" or to "possess nuclear reprocessing and uranium enrichment facilities." There were immediate problems with compliance. The Clinton administration responded with a flurry of diplomatic efforts (Jimmy Carter was a special envoy to Kim Jong Il), which led to the Agreed Framework of 1994, in which North Korea once again promised not to pursue nuclear weapons. In exchange, the allies gave the North heavy fuel oil and two "light water nuclear reactors" for peaceful energy. President Clinton called it "a good deal for the United States." North Korea's negotiator, Kang Sok-ju, described it as "a very important milestone document of historic significance" that would resolve his country's nuclear dispute with the United States "once and for all." The pact, he swore, would resolve "all questions of the so-called nuclear weapons development by North Korea" that have raised "such unfounded concerns and suspicions."

The North cheated, and formalized it in 2003 by dropping out of the Nuclear Non-Proliferation Treaty.

In 2005, negotiators agreed that North Korea would be removed from the list of state sponsors of terrorism, and would no longer be under the strictures of the Trading with the Enemy Act. In return -- all together now -- North Korea committed to shutting down the Yongbyon nuclear facility. In addition, "all nuclear weapons" would be "comprehensively declared and completely, verifiably and irreversibly eliminated."

North Korea has been selling the same promise to denuclearize for 27 years, getting a good price every time.

"Coming to the table" is not such a milestone for the North Koreans. It's worked brilliantly for them. The question is whether our president, so fond of claiming victories, will understand that solemn promises from this regime are worthless.