Mona Charen
|
Posted: Mar 11, 2016 12:01 AM
Share   Tweet
The opinions expressed by columnists are their own and do not necessarily represent the views of Townhall.com. 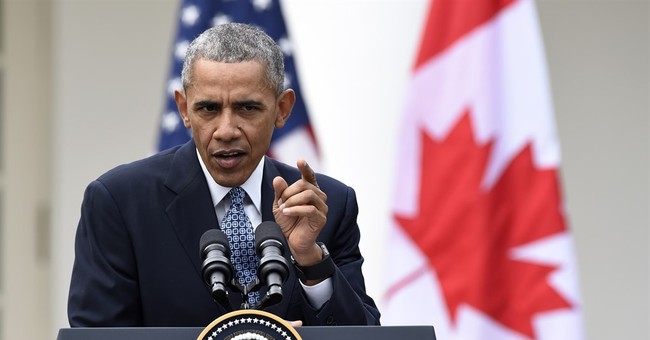 Trending
"Burn it down." That's the slogan of faux conservatives who now rejoice that the Republican Party is being smashed by a slick, howlingly transparent grifter. The urge to destroy has a kind of pornographic appeal to a certain personality -- but it's a shock to find it so widespread.

The Republican Party is choosing an odd time to commit suicide. Obama's two victories were painful setbacks, but in the Obama era the Democrats lost 13 U.S. Senate seats, 69 House seats, 913 legislative seats, 11 governorships and 30 legislative chambers. All that stood between Republicans and real reform at the federal level was the White House -- and the Democrats were sleepwalking toward nominating the least popular major player in American politics.

Republicans have managed to find someone who is even less acceptable. One-third to 40 percent of Republican primary participants are embracing a figure who not only will certainly lose the general election but also introduces an element of fascism to American politics, and thus demoralizes the Republican majority while delegitimizing the party in the eyes of others. It is Trump's unique contribution to wed authoritarianism -- threatening the First Amendment, promising war crimes, admiring dictators, encouraging mob violence, fomenting racial and ethnic strife -- with Sandersesque leftism on entitlements, abortion and 9/11-truther foreign policy.

And what sin has brought down this despoiler upon the Republican Party? Why are so many self-styled conservatives complacent about his success? Was it the failure to stop Obamacare? Please. That was never possible with Obama in office. It would have been possible, in fact it was probable, that it would have been replaced if Republicans held majorities in Congress and got an agreeable executive. But now? No. Failure to get control of the border? Illegal immigration from Mexico has slowed to a trickle and, in fact, more Mexicans are now leaving than coming. Failure to defund the Export-Import Bank? Yes, crony capitalism is disgraceful, but the irony of those who are offended by such things sidling up to Trump -- who boasts of buying influence -- is rich.

As Edmund Burke observed about the extremists of his day: "He that sets his house on fire because his fingers are frostbitten can never be a fit instructor in the method of providing our habitations with a cheerful and salutary warmth."

Here are a few words of praise for the Republicans. The Republican Party has become more reform-minded and more conservative over the past 30 years. The Arlen Specters and Bob Packwoods are pretty much gone. In their places are dynamic, smart, articulate leaders such as Tom Cotton, Ben Sasse, Cory Gardner, Bobby Jindal, Scott Walker, Paul Ryan, Tim Scott, Nikki Haley, Ted Cruz, Susana Martinez and Marco Rubio. The party has become more conservative and more ethnically diverse.

Between 2008 and 2014, when Republicans were the minority in the Senate, they blocked cap and trade, the "public option" in Obamacare and card check. Republicans declined to give President Obama universal pre-K, the "Paycheck Fairness Act," expanded unemployment benefits, a higher federal minimum wage, varieties of gun control, mandatory paid sick leave, a tax on multinational corporations, higher taxes on individuals and more. They passed bills authorizing the Keystone pipeline (which was vetoed) and trade promotion authority (the one issue Obama is not wrong about). They endorsed entitlement reform.

The American system is slow and balky by design. It requires maturity and patience to achieve your political goals. Democrats have been remarkably strategic, returning again and again to cherished objectives, whereas Republicans have told themselves that leadership treachery rather than Madisonian architecture accounts for their frustration.

Those who encouraged the "burn it down" mania and who popularized the narrative that a malign Republican "establishment" was responsible for the state of the nation may be many things but they are not conservative. Conservatives respect institutions and traditions. They understand that process is ultimately more important than policy outcomes because it guarantees legitimacy and political stability. Laws can be repealed. That is why Obama's worst offenses were not Dodd-Frank, the stimulus bill, or Obamacare, as bad as those were. His worst offenses were against constitutional constraints. He governed by executive fiat and got away with it, thus undermining the rule of law.

A plurality of Republicans seems to have accepted and adopted contempt for the Constitution. They will reap the whirlwind and look back longingly at the Republican "establishment."