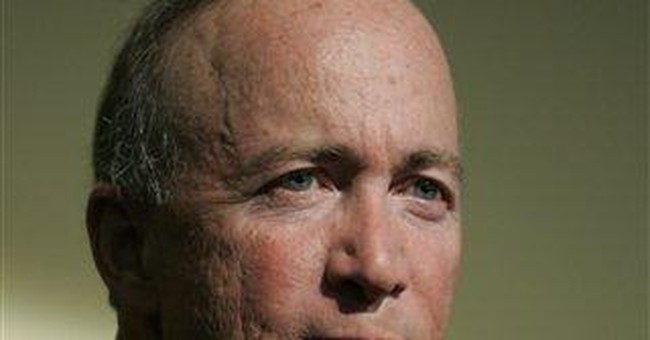 INDIANAPOLIS -- "If I could wave a magic wand and change just one thing, it would be to guarantee that every American child could grow up in a two-parent home until the age of 18. That would solve maybe three-quarters of our problems."

So said Indiana governor and possible presidential candidate Mitch Daniels. The words may surprise those who know only that Daniels has proposed a "truce" on social issues for the 2012 campaign. Daniels, whose pro-life and pro-family credentials could not be more solid, was simply attempting to sketch the nature of the fiscal and economic catastrophe that he says is coming, and that, for now, must take priority. "The debt is a devastating enemy. The threat from the Soviet Union may have been more severe -- if you go broke, you're still alive -- but it was also less likely." National bankruptcy, on the other hand, "is a mathematical certainty" if we don't change course ... and fast. "The America that we have known is profoundly threatened."

It's because the stakes are so high that Daniels has let himself be cajoled into considering a presidential run himself -- though with reluctance -- and I'll come back to that in a moment. A parade of political professionals, pundits, and scribblers (including me) has trouped to Indianapolis because the modest, humorous, and mild-mannered Daniels may well be the best chief executive in American government.

After stints as a Senate staffer, a senior adviser to President Ronald Reagan, president of the Hudson Institute, president for North American operations at Eli Lilly, and director of the Office of Management and Budget under George W. Bush, Daniels was elected governor of Indiana in 2004. He was re-elected in 2008 (when Obama carried the state), winning more votes than any candidate in the state's history.

Inheriting a $600 million deficit, Daniels transformed it into a $370 million surplus within one year, without raising taxes. "You'd be amazed how much government you'll never miss," he grins. Six years on, Indiana now enjoys a AAA bond rating, boasts the fewest state workers per capita in the nation, enjoys the third-highest private-sector job growth in the nation, has seen property taxes drop by an average of 30 percent, and was ranked first in the Midwest for business climate by the Tax Foundation. Daniels was named Public Official of the Year in 2008 by Governing magazine.

It isn't that he has simply accomplished economies. Daniels believes in improving government's performance -- cutting less important spending in favor of more important, and keeping close tabs on results. Under his leadership, the state has increased K-12 education funding by 12 percent, hired 800 new child welfare workers, added 150 more state troopers, provided free or reduced price medications to 288,000 Hoosiers through the Rx for Indiana program, reduced wait times at the DMV to fewer than eight minutes, funded a $10 billion infrastructure improvement plan to repair roads and bridges, and improved health care for the low-income through the Healthy Indiana Plan, which encouraged healthy behaviors (and which may be unsustainable if Obamacare is not repealed).

If there is one way in which Daniels differs from many conservatives, it isn't on the importance of social issues; it's on government. Hanging on the wall of his office are portraits of illustrious Hoosiers, from Eli Lilly to Cole Porter to Gus Grissom.

"Our job (in government) is to make it easier for them to do what they do," he explains.

And it's worth doing well. It matters to Daniels that people have faith in their elected leaders -- in the system.

"Oh, it's easy to trash government," he acknowledges, "I could do it all day. But you have to be careful not to suggest that all of government is corrupt and wasteful and full of knaves. We have some huge problems to solve -- many created by government -- but government is going to have to solve them, too."

And that brings us back to his reluctance to run for president. Daniels wrote all of his own campaign commercials -- as he writes all of his own speeches (or composes them, since he is one of those natural public speakers who needs only a couple of index cards). His final commercial in 2008 promised that if voters re-elected him, "This is last time you'll ever have to see me in a commercial." It was typical of Daniels' self-effacing humor. But he meant it. And he really hates the idea that Hoosiers would think he was insincere.

My 14-year-old son, Ben, upon hearing this, said, "Well, OK, tell him not to run commercials in Indiana!" -- a solution that might seem a bit lawyerly to the straight arrow from the heartland. For now, he remains undecided, focused for at least the next four months on dramatically improving education in Indiana. After that, perhaps Hoosier voters can extend a waiver about that last commercial ...