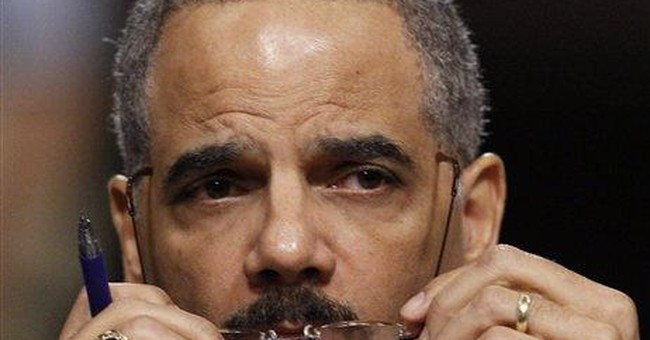 Attorney General Eric Holder adopted a tough guy pose when he announced that Khalid Sheikh Mohammed and four others will be tried in federal court for the most heinous terror attack on Americans in history. "After eight years of delay," he intoned, "those allegedly responsible for the attacks of September 11 will finally face justice. It is past time to finally act."

Where to begin? The claim that the Bush administration was somehow dilatory sets a new standard for gall, particularly coming from Eric Holder. As former federal prosecutor Andrew McCarthy points out, "The principal reason there were so few military trials is the tireless campaign conducted by leftist lawyers (including Holder) to derail military tribunals by challenging them in the courts."

Those lawyers threw up hundreds of roadblocks. Military detentions and tribunals violated, they claimed, the U.S. Constitution, the Geneva Conventions, and the Uniform Code of Military Justice. Litigating all this has taken years.

At last clearing those obstacles, the government initiated Khalid Sheikh Mohammed's military trial in Guantanamo in September 2008. In December, KSM pleaded guilty and asked to be executed.

But now, the attorney general puffs out his chest and declares that by trying KSM in an Article III federal court, he has chosen the forum "most likely to lead to a positive result."

This is an excruciatingly awful decision that no hanging judge talk of "the ultimate penalty" can perfume. What about the increased risk of terror attacks on New York during the trial? The city is "hardened" against attacks Holder assures us. Really? Like Fort Hood?

By granting a civil trial to KSM, while Abd al-Rahim al-Nashiri, who bombed the USS Cole in Yemen, will receive a military tribunal, the U.S. telegraphs this message to terrorists: Wherever possible, attack our civilians. You'll get more lawyering and a better deal than if you attack our military. (And by the way, you'll get more rights than a member of our military who commits a crime.)

Attorney General Holder is keen to prove to a supposedly skeptical world that America lives up to its values (never mind that granting the full rights of citizens to enemy combatants is not part of our creed -- nor anyone else's). Yet he has also repeatedly asserted that a not-guilty verdict is unacceptable. "Failure is not an option. These are cases that have to be won." Whoa. In the first place, it isn't at all beyond imagination that the government could lose this case. KSM was waterboarded. No evidence thus obtained is admissible. A liberal judge who disliked the Bush administration might exclude other key evidence as well.

But Holder says he'll be found guilty. Isn't that a perversion of our jurisprudence? If a not-guilty verdict is impossible, then the trial is a sham. "Sentence first -- verdict afterward" said the Red Queen.

Moreover, the Justice Department has assured Sen. Jon Kyl that "we will not release anyone into the United States if doing so would endanger our national security or the American people." So in the event that KSM is acquitted, it's the position of the Obama Justice Department that we would continue to hold him? How does that outcome burnish the reputation of our justice system?

And while we're on the subject of not thinking things through, at a Senate hearing, Holder could not answer Sen. Lindsey Graham's question about how we would deal with Osama bin Laden if we caught him tomorrow. Would he be Mirandized? Would we give him a lawyer? Isn't that the precedent this decision sets?

There are dozens more reasons (including the intelligence bonanza this will confer on al-Qaida) that this decision is among the worst to emerge from a terrible presidency. What did they hope to achieve? Perhaps they have thought it through -- at least as far as how the trial would unfold. With no defense (he has boasted about his mass murder), what will KSM do? He will put the CIA and the Bush administration on trial. Prepare for lurid accounts of his and others' mistreatment.

Is that the nub? To satisfy the revenge fantasies of American leftists who have lusted to put the Bush administration on trial, the Obama administration is willing to sacrifice logic, justice, national security, and honor?

When KSM's star turn in the courtroom goes viral on the Internet and inspires thousands of new jihadis, the Obamaites can console themselves that at least they stuck it to George W. Bush.