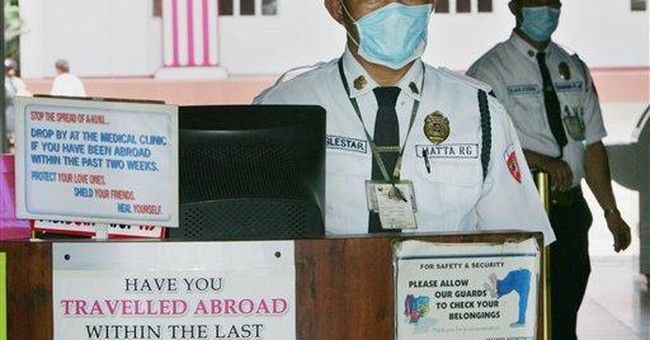 "This Time, We Won't Scare" boasts New York Times columnist Nicholas Kristof, strapping on his armor for the coming joust. The health care debate will be cheapened, he warns us, by scaremongers, just like those who "spread rumors" during the campaign that Barack Obama was a "secret Muslim conspiring to impose Sharia law on us." It will be subsidized, he says, by "the same firm that orchestrated the 'Swift boat campaign' against Senator John Kerry in 2004."

It's difficult to have an honest debate if your first move is to attempt to delegitimize the other side. Many liberals seem to believe that they never lose debates over policy; they are instead undone by conspiracies, lies, and manipulation by dark forces (usually corporate) on the right. To use the word "firm" regarding the Swift boat veterans is a case in point. There was nothing corporate about the way the Swiftees got together. It was the work of John O'Neill, who had debated John Kerry more than 30 years before, and hadn't forgotten a thing. As for the suggestion that opponents of nationalized health care are equivalent to those who whispered about Obama's Muslim links during the campaign -- that is, or ought to be, beneath the New York Times.

Kristof also raises, as other liberal outlets like Newsweek have done as well, the old saw about infant mortality rates. We spend nearly twice as much per person on health care as Canada, Kristof writes, "yet our infant mortality rate is 40 percent higher." Advocates of single-payer commonly cite infant mortality rates because the U.S. lags behind other industrialized nations on this measure. But, as many studies have revealed, these numbers are not reliable. In the first place, nations have different standards about how to measure infant mortality. In some countries, a severely premature infant is labeled a fetal death instead of an infant death. Not in the U.S. In many nations, if a child dies within 24 hours of birth, it is labeled a stillbirth. Not here. Social and cultural factors -- including maternal drinking, drug use, and age -- are key to infant mortality and have little to do with access to or quality of health care. In America, infant mortality rates are sky high (five times the national average) on Indian reservations (which have publicly financed health care by the way through the Indian Health Service) and quite low in places like Utah and Washington.

There are other international comparisons that are more useful. Consider five-year survival rates after a cancer diagnosis. Unlike infant mortality, which is confounded by definitional and cultural factors, cancer survival rates are a pretty good measure of the quality of a health system. These numbers aren't perfect either. They are affected by factors like the uninsured in America (25 percent of whom are illegal immigrants) who tend not to get early screening for cancer and have more advanced cases at the time of diagnosis. The data that follow are accordingly all the stronger.

The journal Lancet Oncology has reported that American cancer patients live longer than those anywhere else on the globe. Betsy McCaughey, former Lieutenant Governor of New York and a health statistics numbers cruncher, interprets the Lancet's (and other) findings as follows:

American women have a 63 percent chance of living at least five years after a cancer diagnosis, compared with 56 percent of women in Europe. For American men, the numbers are even more dramatic. Sixty-six percent of American men live five years past a diagnosis of cancer, but only 47 percent of European men do. Of cancers that affect only women, the survival rate for uterine cancer is 5 percentage points higher in the U.S. than the European average, and 14 percent higher for breast cancer. Among cancers that affect only or primarily men, survival rates for prostate cancer are 28 percent higher in the U.S., and for bladder cancer, 15 percent higher.

The British Health Service keeps costs down by rationing care through long waiting lists for service. The Manhattan Institute's Dr. David Gratzer reports that an estimated 20 percent of British lung cancer patients considered curable when they were first placed on the waiting list for chemotherapy or radiation were incurable by the time they obtained treatment.

An argument often advanced by single payer advocates is that nationalized health care leads to more preventative care. But an analysis by the Commonwealth Fund found that American women are more likely than those in Australia, Canada, and New Zealand to get regular Pap tests and mammograms. In Great Britain, men do not start getting screened for colon cancer until age 75. In the U.S. men are urged to get their first colonoscopy at 50.

We can certainly make improvements to our health care system -- decoupling tax deductibility from employment would be a great first step. But let's be clear: We have a lot to lose if we follow the example of Europe and Canada. In fact, those countries are starting to move back toward more market-grounded approaches. Let's not march backwards in the name of progress.