Stand Up for Capitalism! 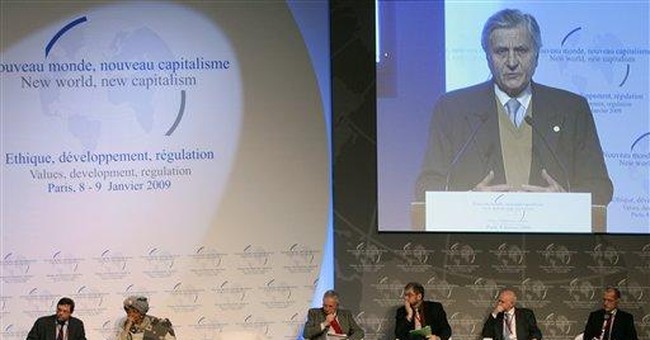 I find myself tuning in to CNBC these days. This is unusual for me as business news bores me. I'm one of those whose eyes glaze at the mention of credit/default swaps, futures trading, and derivatives markets. But now, with the Obama/Pelosi/Reid troika attempting to remake our nation, I will submit to chatter about all of those things as long as I am treated to some full-throated defenses of capitalism.

If ever there were a time when our market economy deserves a little coddling and a soft pillow under its head, it is now. Battered by a financial meltdown, a plunging stock market, declining trade, and frightened consumers, now would be the time to cut corporate tax rates (which are among the highest in the world), reverse the "mark to market" rule for valuing assets, temporarily increase unemployment compensation and Medicaid (with sunset provisions), and keep taxes low. When Barack Obama agreed last autumn that it was not a good idea to raise taxes during a recession, it seemed that he was at least enough of a moderate to understand the importance of markets. One can no longer indulge that hope. Like blasts from a machine gun, Obama has announced higher taxes on the owners of small businesses (the most productive individuals), higher taxes on the energy industry (through the cap and trade system), green mandates on the auto industry that will increase the cost of each vehicle, a bailout of mortgagers that will increase the cost of mortgages down the road, increased unionization (which reduces jobs), a repeal of the successful welfare reform of the 1990s, and a rhetorical assault on Wall Street that leaves investors edgy.

The Democrats scoff when you use the "s" word (socialism). It's a bogeyman, they argue. Not so. If by socialism you refer to the sort of government-heavy economies that characterize most of Europe, then we are clearly headed there about as fast as Flight 1549 was headed for the Hudson River.

By the sheer size of the budget they are pushing, Obama/Pelosi/Reid are increasing the share of the American economy that will be controlled by the government. Government spending accounts for more than 50 percent of the economies of France and Sweden and more than 45 percent of the GDPs of Germany and Italy. As recently as 2006, the federal government's share of America's GDP was 21 percent (with another 11 percent for state and local governments). Now it is approaching 40 percent and likely to grow significantly beyond that if Obama and Co. have their way on health care reform, universal pre-K to college education, and other programs.

We are rapidly narrowing the gap with Europe. This represents policy nirvana for the Democrats. They adore the sclerotic, slow-growing, cradle to grave security of the European Union. But do most Americans really want to go there? We will emerge from this downturn. But if the Democrats succeed in using it as an excuse to impose a huge new welfare state, we will not emerge as the same country.

Per capita economic output has been much higher in the United States than in the European Union. Our growth rates have been consistently higher since the Second World War. Until this recession began, America's unemployment rate was half of Europe's, and our unemployed spent less time jobless than did Europe's. European industry has certainly contributed to world prosperity, but cannot match the United States for innovation, dynamism, freedom, or wealth creation. And the Europeans are failing the most basic test of vitality -- they are demographically disappearing. That's one reason why the term "once-great" applies to places like Great Britain and France.

Yes, there's a recession on and it's deep. Capitalism is not perfect (though one harbors the suspicion that if government had not, in effect, subsidized risky mortgage lending, we would not be in this position). But with all its defects, capitalism remains the greatest engine of prosperity the world has ever witnessed. Just in the last 25 years, hundreds of millions of people, principally residing in China and India, who had been close to destitution and starvation are driving cars, sipping lattes, and chatting on cell phones thanks to free market reforms. Countries with few natural resources other than the brains of their people -- like Singapore, Hong Kong, Taiwan, and Japan -- have become economic powerhouses by permitting the free market to work its magic.

Here at home, the U.S. has been able to dramatically improve standards of living not just for the wealthy (they do fine in every country) but for ordinary people. Hard work has been rewarded not punished. And the free market has given us everything from computers and iPods to Prilosec and the Mayo Clinic.

It didn't seem possible six months ago that capitalism in the United States could be in danger. If Obama/Pelosi/Reid have their way, the U.S., too, will bear the prefix "once-great."