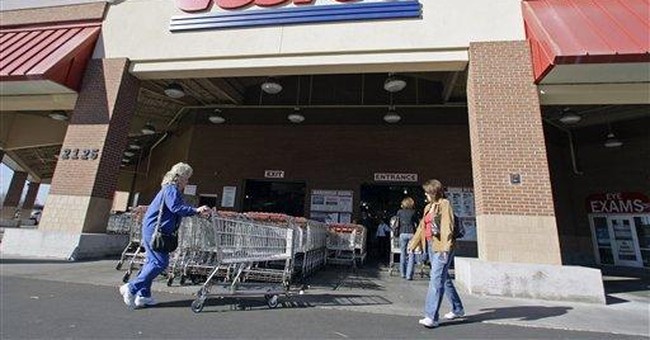 They don't have enough to eat. Five people are dead in Port Au Prince, Haiti after a week of food riots. Unions in Burkina Faso have called a general strike to protest the high cost of grain. Food riots have rocked Egypt, Cameroon, Indonesia, Ethiopia and other nations. In Manila, police with M-16s have supervised the sale and distribution of subsidized grain. Hoarders have been threatened with life imprisonment. In Thailand and Pakistan, troops are guarding fields and warehouses. In Egypt, the army has been called out to bake bread. Even in the United States, a run on rice has caused big-box retailers Sam's Club and Costco to limit the amount of rice consumers can purchase per visit (though the cap is extremely generous -- each customer can buy four 20 pound bags of rice per day at Costco).

The inflation in food prices worldwide -- prices have soared 83 percent in the past three years, according to the World Bank -- has a number of causes. Certainly increased demand from India and China -- nations that until quite recently maintained hundreds of millions of people at subsistence levels -- is part of the explanation. The Chinese and Indians are eating better, but their enhanced diets are putting pressure on supply. And our good friends at OPEC can take a bow. The oil sheikhs and that great tribune of the poor, Hugo Chavez of Venezuela, are doing their parts to plunge millions of poor people around the globe into starvation by artificially boosting the price of oil (which is required to grow food and transport it).

We in the U.S. and the European Union are not blameless either. Not by a long shot. In our search for cleaner energy we jumped aboard the "biofuels" bandwagon. This debacle should be an object lesson. Fighting global warming (if there is global warming) is a tricky business and can only be undertaken after careful review of the costs and benefits.

It seemed like such a painless solution. It fits on a bumper sticker. In fact, I saw one yesterday: "Don't burn fuel. Grow it." The EU adopted a goal of producing 10 percent of its fuel for road transportation from biofuels by 2020. The U.S. government (cheered on by the agriculture industry and environmentalists) adopted a mandate of 36 billion gallons of biofuel production by 2022 -- a five-fold increase over 2006 levels amounting to 28 percent of the U.S. grain harvest. Congress and the president joined hands to pass this feel-good legislation just when, as the Wall Street Journal pointed out, new data were demonstrating that biofuels cost more energy than they save. "When the hidden costs of conversion are included, greenhouse-gas emissions from corn ethanol over the next 30 years will be twice as high as from regular gasoline. In the long term, it will take 167 years before the reduction in carbon emissions from using ethanol 'pays back' the carbon released by land-use change."

The amount of global warming that this investment in biofuels was designed to obviate was truly trifling (if GW exists at all). Economist Bjorn Lomborg's work (see "The Skeptical Environmentalist" and "Cool It") is absolutely essential to understanding this issue. He has pointed out that even if all of the world's industrial nations reduced their outputs of greenhouse gases by 20 percent as the Kyoto Protocol would have required by 2012 (and many of the signatories are not on track), the reduction of global warming would have been 0.1 F degrees lower than it would otherwise have been, thus delaying global warming by a mere five years.

The costs, on the other hand, of meeting these or other targets are substantial. There are the opportunity costs -- funds spent on reducing global warming are diverted from other worthy efforts like supplying clean drinking water to Africa, fighting malaria, and improving flood control infrastructure. And as we are now seeing on our front pages, there are direct costs like dramatically increasing the price of food and pushing millions of poor people to desperation.

"When millions of people are going hungry," Palaniappan Chidambaram, India's finance minister told the Journal, "it's a crime against humanity that food should be diverted to biofuels."

This is not to suggest that all efforts to conserve energy or maintain the environment are folly. Rather, it's a cautionary tale. How much environmental improvement do we really get and -- this is paramount -- at what price?