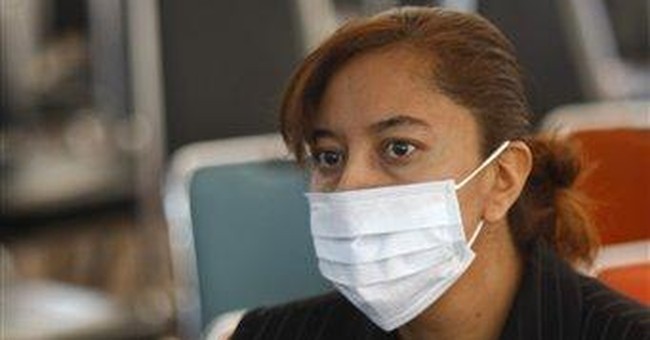 When I had the nerve to suggest that since people from Mexico were bringing a deadly swine flu virus into the United States that it might be a good idea to tell them to stop coming by closing the southern border, it took all of about three minutes for a caller to accuse me of being a racist.

“Alex” from Southern California said he was an Hispanic man whose family came here from Central America. He could barely contain his indignation. “You conservatives are all alike," he fumed. “I'll bet you didn't call for the same thing when we had the bird flu outbreak from Asia during the Bush Administration.”

I tried to be patient. “Alex," I said, “last time I checked, we don't share a border with Asia and since the bird flu was transmitted by birds to humans, not human-to-human (like the swine flu), what should we have done? Stopped birds from migrating?”

He was in no mood to listen. He was already on to another topic. “It's just like the invasion of Iraq...”, he began.

Leave it to an Obama supporter to bring up Iraq in the middle of a conversation about the swine flu pandemic.

And he's not even all that unusual. This week, some of the lefty bloggers were claiming that Republicans were responsible for the swine flu outbreak since some of the stimulus money that supposedly would have gone towards vaccinations was held up by GOP legislators.

It's awfully hard to get into the head of a liberal. Instead of logic and reason, they are drawn to emotions and feelings. That's not to say we conservatives don't emote or feel. It's just that we like to apply a healthy application of common sense to things. If there's a swarm of bees outside an open window, it might be a good idea to close the window, even if a few bees have already flown into the house.

Somehow, Democrats who oppose shutting the border don't see the analogy. Vice-President Joe “I-wouldn't-let-my-family-ride-the-subway-because-of-swine-flu” Biden defended the refusal to seal the border by saying that it's too late, a few people have the flu in the U.S. now anyway, so why bother?

I guess he'd be the one dope who stared open-mouthed at that proverbial swarm of bees and just watched as they all flew into the house, stinging everybody in sight.

No, Democrats know full well that closing the U.S./Mexico border right now makes all the sense in the world. But again, you have to try and get into their heads to see why they won't.

Alex genuinely heard racism when he listened to my perfectly reasonable suggestion. Liberals instinctively cling to racism or bigotry or hate or narrow-mindedness whenever they can.

And in this case, they're smart enough to know that finally dealing with this disaster of an issue called border security might just lead to a further effort to thwart the tidal wave of illegals - once and for all.

If, heaven forbid, we actually did something about the problem along the southern border, we could stop the spigot of people who continue to insist on stealing residency from our country.

Democrats like Alex and President Obama and Secretary Napolitano don't dare stand up to Mexico and threaten the path that millions of determined illegal immigrants take into the United States.

Now that Democrats are in charge in Washington, I guess it's futile to hope that anything is going to be done with the terrible problem of illegal immigration. If they won't close the border to keep a killer virus from entering the country, why would we expect them to try and stop drug cartels and drunk drivers and child molestors and other criminals from sneaking across the border and killing and maiming our people?

I await the day when President Obama decides that we just don't need any border patrol agents or law enforcement personnel along the border.