Fired Up About the TV 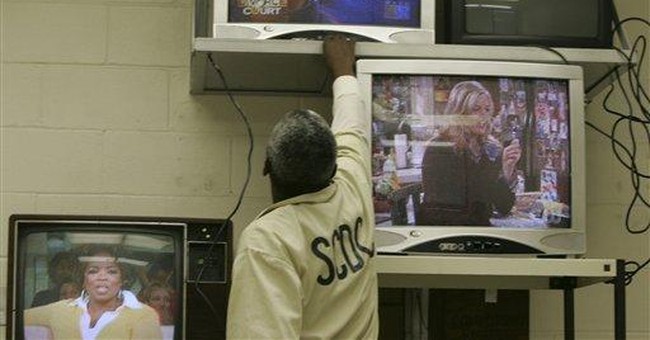 I am so angry at the government right now I could spit.

I know that many of my fellow conservatives are upset about the economic stimulus package. And rightfully so. When President Obama said that “now is not the time” for companies to make a profit, I wonder when he thinks the time would be right.

As he presents a mandate to limit the salaries of CEOs who run companies being bailed out by the American taxpayer, I wonder how far that will go. Never before has the term “slippery slope” held such perilous meaning for the United States.

But I’m not livid over Wall Street or the TARP plan or Obama’s socialist-leaning speeches and TV appearances right now.

This week, the House voted 264-158 to postpone the shutdown of analog TV signals to June 12th. As you’ve probably heard, the switch from analog TV to digital was supposed to take place on February 17th.

But Democrats are worried that poor and rural and minority Americans are simply not prepared to obtain the $40.00 converter box that they will need to watch their favorite episode on television in crystal clear digital clarity.

Apparently, there are more than 6.5 million households in America that still rely on analog TV sets to pick up over-the-air broadcast signals. This, despite the fact that the feds have come up with a massive welfare program to hand out “vouchers” that enable people to request up to two converter boxes per household.

Of course, these vouchers don’t come from the digital TV fairy. You and I are paying for this scheme and to date, we have spent $1.34 billion dollars to make sure every American can watch “American Idol” or “Jerry Springer” whenever they wish.

Forget those shows, this whole debacle is like living in an episode of “The Twilight Zone.”

While headlines are being generated about the Democrat mindset of nationalizing private businesses and bailing out failed ventures, we seem to be ignoring one of the most massive bail-outs ever: the taxpayer-funded process of transitioning people from analog to digital television.

Would someone please tell me why any of us should pay for our neighbors digital converter box?

Every time I ask this question on my radio show, I’ll inevitably get a caller who says, “Well, Mike, since the government is forcing this technical change, they need to pay for it.”

I try to patiently remind these misguided folks that “the government” is us! You and I are subsidizing the cost of all of these converter boxes. So now it can be officially declared that the United States taxpayer is footing the bill for TV viewers who are either too poor or uneducated or lazy to go down to Best Buy and buy a $40.00 converter box for their TV set.

I don’t really understand why there’s this grumbling about bailing out failing companies. Now that we have to pay for people to enjoy re-runs of “Hee-Haw” every night, we might as well just become completely dependent on the government for everything.

After all, there’s nothing quite like watching a movie in a home theatre. Perhaps we can start paying for those for poor people. Imagine, taxpayer-funded surround sound all around!

I interviewed Sen. Tom Coburn from Oklahoma today and he disgustedly told me that he voted against this insane “coupon/voucher” program for TV converter boxes. We’re going to need solid conservatives like him in Washington to fight this bailout/welfare/ socialist crowd more than ever.

As I continually ask people why Democrats are hell-bent on forcing this program down our throats, I heard one of the best explanations from a guy in Los Angeles this week: nothing affects change like propaganda. And since the left gets to run most of the mainstream television media, they want to make sure their distortions and lies are delivered to every single American they can reach via the old “boob tube.”

When President Obama wanted to pretend to be remorseful over Tom “I-don’t-pay-my-taxes” Daschle, he made the TV rounds like an eager author getting his first shot on the Oprah show.

He understands the power of the medium.

And he wants to control the message.

What better way to do that than making sure the taxpayers are forced to pay for every television set that needs to be converted from analog to digital?

A chicken in every pot.

And a digital TV converter box in every American home, courtesy of the taxpayer.