Farewell to a leader 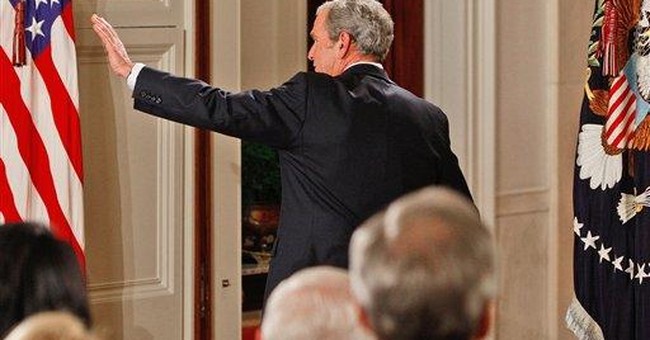 There is a number of ways to describe how it feels to sit a few feet from the leader of the free world in the Oval Office at 1600 Pennsylvania Ave. in an informal, free-wheeling meeting with the President.

Most of all, one is consumed with a feeling of incredible gratitude that this privilege and opportunity has been extended.

I suppose the only thing more thrilling than spending an hour and fifteen minutes with a handful of my talk radio colleagues in the Oval Office this week for a combination on-the-record/off-the-record visit with the President is that it was the second time I’ve been fortunate enough to be invited to such a meeting.

Much has been written about the history of that office and building, but for me, this was a time to listen and watch and observe and speak with the man who has been in the center of one of the most tumultuous eight-year periods in our nations’ existence.

The first time I left the White House after a similar meeting, I remember talking to my friend Sean Hannity about how different things would be if President Bush’s enemies and critics could be exposed to him in the same setting.

No where is the bumbling, fumbling, absent-minded frat boy. The idea that Bush is somehow disconnected and dense is a complete and utter fabrication, a narrative told by people with an agenda, or individuals who think they have him figured out and yet are positively clueless.

Oliver Stone might think he’s a guy who chews with his mouth open and yells at the hired help, but the George W. Bush I’ve spent nearly three hours with is a warm, funny, smart, engaged, compassionate, patriotic, decent and honorable man.

In both of our meetings, roughly three years apart, the President continually hammered home the point that he simply was not going to allow another terror attack on American soil to happen on his watch after 9/11. It consumed him. He spent mornings, noons and nights plotting, studying, worrying and figuring ways to keep Americans from being slaughtered at the hands of radical Islamists.

And when the history books are written, generations will be reminded that he succeeded.

We covered a variety of topics during this visit. And I had made a personal promise to ask the President about border patrol agents Ramos and Compean, two men who are rotting in jail because they shot a confirmed, filthy drug smuggler in the butt at the border and evidently, made some procedural mistakes after the shooting occurred.

Our government went into Mexico, where the wounded criminal fled, and brought him back to our country giving him free medical care, cash money, and a promise of immunity as long as he would testify against these two border patrol agents.

He did. And they were convicted of covering up the shooting. They were marched off to prison, sentenced for many years. The drug smuggler, free as a bird, went on to smuggle more drugs across our border and continue to break the law, leaving the feds with a ton of egg on their faces.

For millions of Americans, the continued incarceration of Jose Compean and Ignacio Ramos is a grim reminder of everything that has gone wrong with border security. And there is a fervent prayer in America that these men will have their sentences commuted by this good and decent man, George W. Bush.

For someone like me who has such admiration for a man like Bush, it took all I could muster to likely break protocols and procedures and ask him about this issue.

I cannot tell you what the President said. I’ll respect the rules of that off-the-record conversation.

But it’s safe to say that the President is totally aware of their case. And at least one big-mouthed talk radio host named Gallagher bugged him about it during one of the final interviews of his presidency.

I’m hoping the President commutes their sentences. But whatever happens, I will nonetheless be forever grateful for the determined leadership the man gave his country.

As noted British historian Andrew Roberts noted this week, history will show that this was a good president, a man whose decisions and direction kept this country safe after 9/11.

And I look forward to the day when I can tell my granddaughter, Lily Denise, all about my visits with George W. Bush.