Mike Fuljenz
|
Posted: Mar 09, 2016 12:01 AM
Share   Tweet
The opinions expressed by columnists are their own and do not necessarily represent the views of Townhall.com. 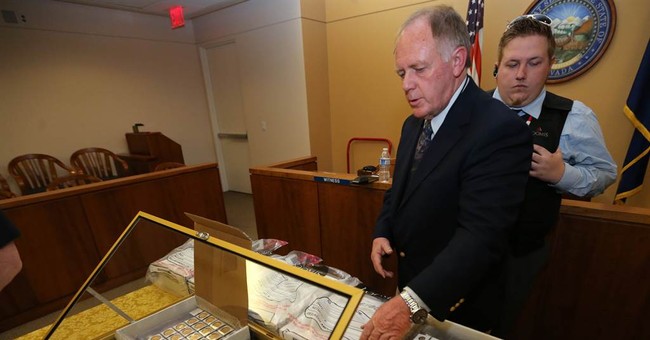 Gold touched $1280 on Friday, March 4, a 20% increase for the first nine weeks of 2016. Gold fell to $1260 late Friday and then recovered Monday. Friday’s rise and retrenchment came rapidly. Gold rose from $1253 at 8:20 am to $1280 at 10:00 am Friday in response to the monthly jobs report (released at 8:30 am), showing a large number (254,000) of new jobs created in February, but a disappointing 0.1% decline in average wages, indicating that the Federal Reserve would likely NOT raise rates this week at their 8-times-a-year meeting of the Federal Open Market Committee (FOMC). With short-term rates remaining near zero, this means that gold will continue to have an advantage over cash. With gold up nearly 20% and stocks down 2% so far in 2016, gold is performing 21.6% better than stocks in 2016.

While gold continues to rise, we see stories almost every week about how a formerly-bearish mainstream Wall Street firm has turned from bearish to bullish on gold. Last week, JP Morgan Chase changed from “underweight” (last year) to “neutral” (January) and now to “overweight” in gold. Chase has also gone “underweight” on stocks. JPMorgan’s Jan Loeys explained the change: “The fundamentals of growth, earnings and recession risk have not improved, and if anything have worsened. We remain wary of the near-empty ammo box of policy makers…. The eventual recession should bring U.S. stocks down some 30%, creating a strong downward risk skew to returns over the next few years.” In commodities, JPM’s advice is to “be short gas, oil and base metals but overweight gold.” They have upgraded their fourth-quarter average gold price to $1,250 per ounce, which has already been exceeded during the first quarter.

These changes in outlook on gold cause clients of these banks to start buying gold. Bank of America Merrill Lynch has reported that inflows to gold ETFs over the last four weeks have totaled $7.9 billion, the largest four-week inflow in seven years. The biggest gold ETF, SPDR Gold Shares (GLD), added 22 metric tons of gold last week. bringing the total to 788.6 tons, their largest gold holding in 18 months.

In Britain, Michael Lewitt of “The Credit Strategist” recommends gold over the euro, yen or dollar, saying that “Gold remains the antidote to central banks’ deliberate policies to destroy fiat currencies. Recently, both Mario Draghi and Haruhiko Kuroda [the heads of the European Central Bank and Bank of Japan, respectively] promised to do whatever they can to destroy their currencies regardless of the consequences to financial stability – comments that would have gotten them fired in a saner era; today, these idiocies win them cheers from global investors intent on committing financial suicide.” The dollar may be doing better than the euro or yen, but gold is doing better than all three major global currencies.