Mike Adams
|
Posted: Jul 07, 2017 12:01 AM
Share   Tweet
The opinions expressed by columnists are their own and do not necessarily represent the views of Townhall.com. 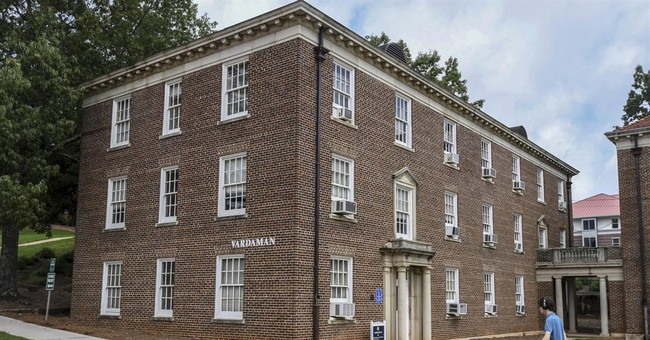 For years, my opposition to UNC diversity initiatives has been a source of controversy across our seventeen-campus system. Many have assumed that my opposition has been a function of personal prejudice or insensitivity to the needs of various “disenfranchised” groups. In reality, it is a function of my belief that people should be judged according to individual character traits, not group stereotypes. However, despite years of opposition to UNC’s victim centered diversity movement, it appears that my side has lost. Accordingly, I write to you today with an offer to join the war against white privilege and ultimately make your long term vision a reality on each campus in the UNC system.

As you know, we have traditionally promoted diversity by providing a sliding scale for students in terms of admission requirements. The theory was that we could neutralize white privilege by making whites score higher on standardized test scores in order to be admitted to one of the UNC schools. Ultimately, we have failed in the goal of making our campuses less white because we have failed to account for overriding economic considerations. My plan will fix that once and for all. It involves two very simple steps.

1. We need an immediate $10,000 tuition increase for incoming white students.Obviously, if we are going to include more marginalized groups on our campuses we need to make room for them. This tuition hike will help accomplish the goal. Critics who say this is racist are wrong. Some whites who are penalized by the hike will have an opportunity to benefit from some of my proposed diversity exemptions, which will help offset the costs of the initial hike.

2. We need an immediate $2000 tuition decrease for students who come from marginalized groups in our society. The money we gain from charging higher tuition to students benefitting from white privilege can be used to fund my proposed tuition cuts for students who promote victim-centered diversity. A list of eligible groups is provided below with justifications for their inclusion on the list.

Women: Critics will point out that our campuses already have more female students than male students. While this is technically true, it ignores our important obligations to the federal government. In recent years, the feds have made it clear that universities will not be the beneficiaries of federal funding unless they continue to promote the myth that there is an epidemic of sexual assault and sexual harassment occurring in America. The more female students we have, the more complaints we will have. Many, or perhaps most, of those complaints will be false. But that is beside the point. Universities are no longer concerned with promoting truth. We are only concerned with identity politics.

Blacks: When it comes to diversity and inclusion, black students matter. We still owe them for slavery. Granted, it has been more than a century and a half since the Civil War. But some white North Carolinians think it is still being fought. The least thing we can do to repay blacks for the trauma of seeing an occasional Confederate Flag is to give them a break on their tuition. This is far better than bringing them in on athletic scholarships and offering them fake classes in African American Studies.

LBGTQIA (and other alphabetically marginalized people): We know that many students decide to experiment sexually while they are in college. A tuition break will just encourage some of them to start experimenting early. If students are allowed to commit to four years of service in the military for help with their college tuition then there should be a similar benefit to reward those enlisting in the sexual revolution for four years.

Illegal Immigrants: Trump is making these richly diverse people rare. Hence, we must recruit them while we can. In addition to the obvious out-of-state tuition waiver, we need to give them the additional tuition cut. Every college campus in North Carolina should be a sanctuary city.

Muslims: Trump has not actually started banning and deporting Muslims. But most “social science” and humanities professors think that is happening. So we need to start bringing them to campus in order to give these professors someone to protect, which, in turn, will give their lives meaning. If our diversity mission succeeds, many will graduate as atheists, which might actually save them from eventual deportation!

Social Justice Warriors: This is bound to be controversial, given that most social justice warriors are bored middle class white kids. But we need to face the reality that we can’t eliminate all white people from campus, regardless of how desirable that may be. The very least we can do is to make sure that the dwindling white minority feels as guilty as possible during their tenure in the UNC system. Even if it is only a process of self-flagellation, it will be a worthy goal. Guilt can be a powerful tool for social reform.

It should go without saying that my proposed group exemptions are cumulative in nature. A black woman can earn a $4000 tuition credit, a black lesbian can earn a $6000 tuition credit, a black transgendered illegal immigrant can earn $8000 (provided he becomes a she), and so on. There is no limit to what a student can accomplish so long as he, she, undecided, or other is willing to take a stand against the status quo.

It should also go without saying that there will be no need for oversight in implementing this new system. We will simply defer to student perception and trust that they are precisely who they claim to be. Those who say they are women are women. Those who say they are black are black, and so on. Once we have rejected the notion of truth, we’ll no longer live in fear of “falsity.”

I hope that you will take my plan as seriously as I’ve always taken your commitment to institutional diversity.