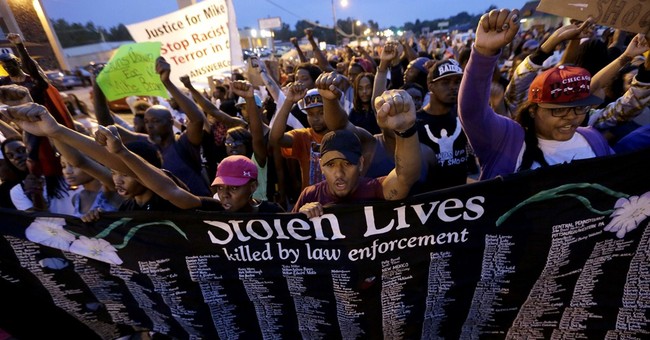 Something is just not right with me. In fact, I’m downright rude. I have a tendency to crash protests even though no one invited me. It happened when I donned a burka back in 2003 disguising myself as an Iraqi woman in order to infiltrate a campus protest against the War in Iraq. It happened again in 2009 when I joined a protest against myself at UMASS-Amherst. It happened yet again last Saturday night when I went to Ferguson and protested against the man while holding a sign saying “Hands up, Don’t Shoot!” I learned a lot that night. So today I’m writing a column to share it with my readers.

I only spoke with a few protestors in Ferguson. And I only asked them a few questions. But the responses were still revealing. In fact, they revealed two undeniable truths that some readers could have gleaned from extensive media coverage of the protests:

1. Ferguson protestors are bored and in need of a cause. I struck up a conversation with a middle-aged black woman who brought a longhaired Chihuahua to the protest. Her dog seemed to like me. That’s how we struck up a conversation. At one point in that conversation she told me I was making history by participating in the protests. She had been protesting for eight consecutive days. She added that we needed to go back to the protest era of the 1960s. I silently thought it would be nice to go back to a time when people didn’t terrorize their own neighbors in the name of civil rights.

Another protestor who we will call Ron (because that’s his name) said that we needed to bring attention to all the hidden injustices taking place in black neighborhoods. He added, “This kind of thing happens every day.” When I pressed him on whether unarmed black men were being shot every day, he gave me some clarification. He noted that black men were often pulled over for no reason. In fact, it had once happened to him. Ron was probably in his mid-thirties and had been living in that neighborhood his whole life.

When you talk to these protestors, you get the sense that they are sincerely angry and in need of some way of redressing their grievances. It’s just that they have difficulty articulating exactly what those grievances are.

2. Any black civil rights cause must focus on what whites have done to blacks in the past, not on what blacks are doing to other blacks right now.

Ron wasn’t able to name any other examples (besides Michael Brown) of unarmed black men being shot in his neighborhood. But he did explain why it was so important. According to Ron, black people are doing all kinds of bad things to each other on a daily basis. Given that pressure, the black community just can’t handle the extra pressure of a white cop shooting a black kid. So the question for Ron is pretty obvious. If you are looking for something to protest, which one will it be; a) the bad things blacks do to each other every day, or b) the one shooting of an unarmed innocent black man (by a bad white man) you can point to in a period of about thirty years of living in the neighborhood.

Fortunately, there is a solution for this dilemma. If the Ferguson protestors are bored and need a cause – and one that focuses on bad white people – I have one for them. It’s called abortion.

Blacks are only 12 percent of the population in America. But 36 percent of the babies aborted are black. That means that of the more than 3000 babies aborted per day in America over 1000 of them are black. To put things in historical perspective, doctors wearing white masks abort at least 7000 babies in a week. Klansmen wearing white hoods have lynched fewer blacks in the entire history of America.

Given that Planned Parenthood is right there in the hood, and that they were born (not pun intended) of the white-dominated eugenics movement, the solution is pretty simple. Stop committing uncivil wrongs against your own people in the name of civil rights. To put it bluntly, stop defecating in your own back yard. Join the pro-life movement instead.

After all, the unborn are disproportionately black, always unarmed, and never guilty. Someone has to protect them from white doctors wielding lethal weapons.