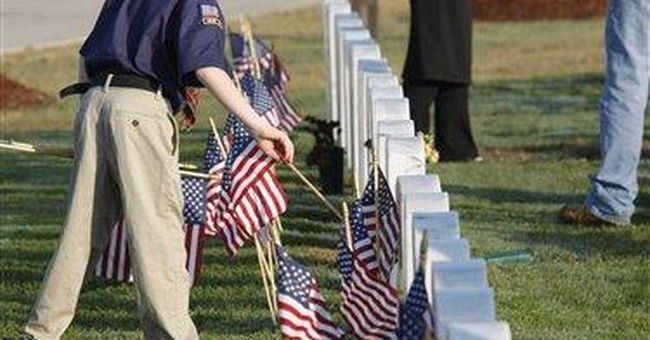 Last Monday night, I spent an evening at my favorite cigar store with several good friends. We were laughing and carrying on as usual when a man came slowly walking in relying heavily on a cane he held with his left hand. He had a cast on his right wrist and a “World War II Veteran” cap on his head. As he passed in front of me I said “Good evening, young man.” He laughed and told me he was 83.

As soon as the veteran said he was looking for two Romeo and Juliets my friend Frank jumped up and opened the door to the humidor to help him find his cigars. A couple of minutes later, the veteran emerged with two cigars, which he plopped down beside the cash register as he reached for his wallet.

As soon as I saw his wallet I tapped him on the shoulder and said “No World War II veteran pays for his cigars in this shop.” I was about to reach for my own wallet when my friend Carl “The Chocolate Chaplain” Byrd shouted “put them on my tab.” The veteran shook my hand and thanked us all before turning and slowly walking towards the door.

After taking a few steps our new friend stopped and turned around. I saw a tear rolling down his left cheek just before he spoke with a voice that cracked with emotion. He said “I get awfully choked up when someone thanks me for my service. It means a whole lot to me.” I told him we all loved him for what he did for us. Carl got up and threw his arms around the man and hugged him before he turned around and struggled to work his cane towards the door.

After our veteran friend was gone the conversation went in an entirely different direction. We stopped trying to one-up each other. We even stopped exchanging insults, which is a favorite pastime at Brookelynn Cigars. We spent the rest of the evening telling stories about our uncles and grandfathers who served in World Wars I and II.

Someone mentioned that the last known veteran of World War I died just last year. We suddenly realized it wouldn’t be long before the veterans of World War II are gone as well.

When I woke up Tuesday morning and turned on my computer I noticed I had over 700 emails in my inbox. I had published an internet column at midnight before I went to bed. The column was about a kid named Kevin Casimer at Purdue University. Kevin was offended because a library science professor named Bert Chapman had talked about the economic costs of homosexuality on his personal blog. So Kevin started a petition to have him fired for “offensive” speech.

My response to Kevin was pretty simple: I used my column to invite people to put their names on a petition to expel Kevin Casimer for intellectual intolerance.

I was only kidding but, apparently, many people thought it was a good idea. I had not previously received more than 600 emails in a day - and that was only when Rush Limbaugh read one of my columns on his radio show. To put things in perspective, the column on Kevin Casimer was the 595th I’ve written since 2003. I had never received over 700 email responses to a column in just one morning

Before I could even get to those 700 morning emails I received another 700 that afternoon. And I have received several hundred - with some variation of “Expel Kevin Casimer” in the subject line - every day since I ran the column. By contrast, Kevin Casimer has succeeded in collecting about five dozen signatures.

One cannot understand fully the strong reaction to Kevin Casimer’s arrogance without reflecting upon the meaning of the scene in Brookelynn Cigars. People are upset to see the passing of our greatest generation. But they are equally upset to see them replaced by our weakest and most arrogant generation to date. I know that every generation of adults thinks the current generation of teenagers and younger adults is the worst. But someone has to be right.

So I am sending a proposal to President France A. Cordova of Purdue University asking her to expel Kevin Casimer. But I’m also asking her to let him back in contingent upon his completion of a simple research project.

1) Did you storm the beaches of Normandy or fight any other World War II battle in order to preserve the right of future generations to be comfortable at all times?

2) What are your personal feelings about those who feel that the United States Constitution (that you defended by risking your life) can now be nullified by subjective feelings such as personal offense or discomfort?

I will also ask Purdue University to let Bert Chapman supervise Kevin Casimer as he carries out this important project. And I will ask Purdue to have the project graded by a panel of young veterans attending Purdue University. They, and only they, will be allowed to readmit Kevin Casimer on the basis of the proper administration and interpretation of this important project. Finally, I will ask that Kevin Casimer only be admitted upon the return of a unanimous verdict.

After all, Kevin Casimer is accused of intellectual terrorism. He should be tried before a military rather than a civilian jury.