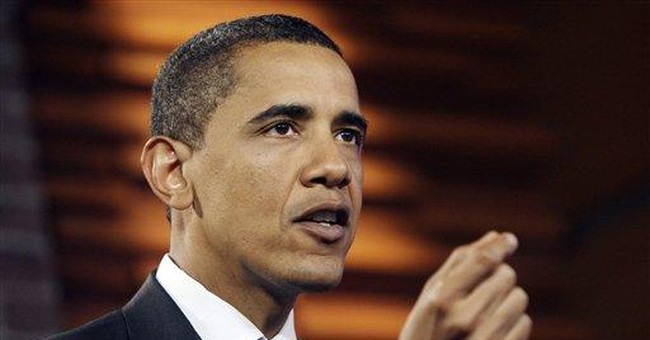 Six months into the Obama administration, it should now be clear to all Americans: Hope and Change came to the White House wrapped in brass knuckles.

Ask the Congressional Budget Office. Last week, President Obama spilled the beans on the "Today Show" that he had met with CBO Director Douglas Elmendorf -- just as the number crunchers were casting ruinous doubt on White House cost-saving claims. Yes, question the timing.

The CBO is supposed to be a neutral scorekeeper -- not a water boy for the White House. But when the meeting failed to stop the CBO from issuing more analysis undercutting the health care savings claims, Obama's budget director Peter Orszag played the heavy.

Orszag warned the CBO in a public letter that it risked feeding the perception that it was "exaggerating costs and underestimating savings." Message: Leave the number fudging to the boss. Capiche?

Obama issued an even more explicit order to unleash the hounds on Blue Dog Democrats during his health care press conference. "Keep up the heat" translated into Organizing for America/Democratic National Committee attack ads on moderate Democrats who have revolted against Obamacare's high costs and expansive government powers over medical decisions.

Looks like there won't be a health care beer summit anytime soon.

The CBO and the Blue Dogs got off easy compared to inspectors general targeted by Team Obama goons. Former AmeriCorps inspector general Gerald Walpin was slimed as mentally incompetent ("confused" and "disoriented") after blowing the whistle on several cases of community service tax fraud, including the case of Obama crony Kevin Johnson. Johnson is the NBA star turned Sacramento mayor who ran a federally funded nonprofit group employing AmeriCorps volunteers, who were exploited to perform campaign work for Johnson and to provide personal services (car washes, errands) to Johnson and his staff.

Walpin filed suit last week to get his job back -- and to defend the integrity and independence of inspectors general system-wide. But he faces hardball tactics from both the West Wing and the East Wing, where first lady Michelle Obama has been intimately involved in personnel decisions at AmeriCorps, according to youth service program insiders.

At the Environmental Protection Agency, top Obama officials muzzled veteran researcher Alan Carlin, who dared to question the conventional wisdom on global warming. The economist with a physics degree was trashed as a non-scientist know-nothing.

Obama Treasury officials forced banks to take TARP bailout money they didn't want and obstructed banks that wanted to pay back TARP money from doing so. The administration strong-armed Chrysler creditors and Chrysler dealers using politicized tactics that united both House Democrats and Republicans, who passed an amendment last week reversing Obama on the closure of nearly 800 Chrysler dealerships and more than 2,000 GM dealerships.

At the Justice Department, Obama lawyers are now blocking a House inquiry into the suspicious decision to dismiss default judgments against radical New Black Panther Party activists who intimidated voters and poll workers on Election Day in Philadelphia. The DOJ is preventing Rep. Frank Wolf, R-Va., from meeting with the trial team in the case. Wolf has been pressing for answers on what communications Attorney General Eric Holder and his deputies conducted with third-party interest groups and other political appointees about the case. So far: radio silence.

In the mafia culture, bully boys depend on a code of silence and allegiance -- omerta -- not only among their brethren, but also from the victims. The victims of Obama thugocracy are no longer cooperating. Perhaps it won't be long until some of the enforcers start to sing, too.