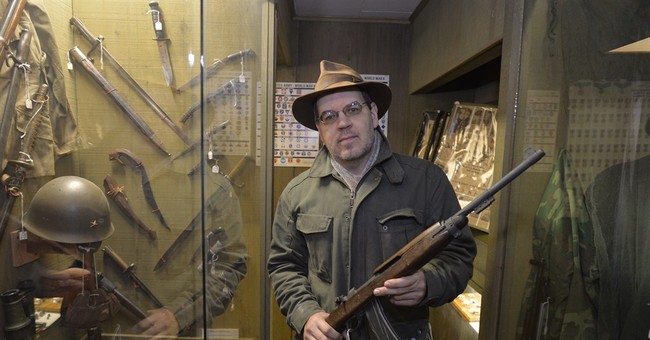 Clearly, Washington State is a much safer place now that they are implementing universal background checks on all private firearm transfers. Oh, you want proof? Just look at Lynden, Washington… Thanks to the new law, a handful of antiquated WWII rifles (used in the Pacific theater) will be stripped from the dangerous hands of a local museum. I know I feel much safer. (Are you picking up on the sarcasm, or do I need to spell it out for you?)

According to the Bellingham Herald:

The Lynden Pioneer Museum will remove World War II-era guns from a current exhibit and return them to their owners, to avoid violating the new background-check law, according to the museum’s director.

Surely this is an over exaggeration, right? I mean, the law couldn’t possibly expect a museum to submit to a background check for the simple sake of displaying a privately owned firearm that is on loan? Could it?

“I read through the law about 10 different times looking for a loophole,” said Troy Luginbill, the museum’s director.

I’m sure the anti-gun nuts who helped pass Initiative 594 are just thrilled that impressionable young school kids will no-longer be able to see the weapon of a WWII soldier (That’s not sarcasm… I really am pretty sure they are delighted); but I also don’t think banning 70 year old rifles from being displayed in a museum was really the objective of Washington’s universal background check.

So we can’t loan out antique firearms to museums. Got it. But at least we still have all our other Second Amendment rights in Washington, right? Well… If you’re a soldier on deployment, you can’t allow your friend to babysit your gun collection (deemed illegal under I-594). And if you and your buddy want to swap guns for the weekend, you might want to think twice (deemed illegal under I-594). Heck, you can’t even loan your gun to a friend at the range, let someone borrow an extra shotgun for home defense, or give a gun as a gift… All of those acts now require a background check.

And, that’s kinda the point. None of these acts were singled out as being terribly detrimental to the safety of the general public. And yet, they are all forbidden under some Bloomberg inspired attempt to regulate Washington into an anti-gun utopia. If a local museum can’t even legally display the firearms loaned to it by private (legal) collectors, you can bet that other “unintended” consequences are coming down the pike.

Washington’s gun-grabbing Hoplophobes sold their anti-transfer universal background check on the idea that it would keep guns out of the hands of criminals… Great. I love keeping guns away from criminals, but that’s not what gets under the skin of pro-gun activists. Defenders of the Second Amendment generally get annoyed with the methods. After all, Infringing on the rights of the law-abiding rarely suppresses the actions of the criminal.

Oh sure, museums are giving back some WWII artifacts, hunters are no longer lending rifles to each other, and life-long friends are no longer having each other babysit their gun collections… But something tells me that the local gang member isn’t running a Form 4473 when he sells his drug dealer a stolen 9mm.

So, good job Washington. Criminals will continue to sell, buy, and traffic their arms in the shadows, while museums dismantle their WWII military collections… We all feel safer now, right?