"Empathy" For the Poor? Unbiblical for a Judge 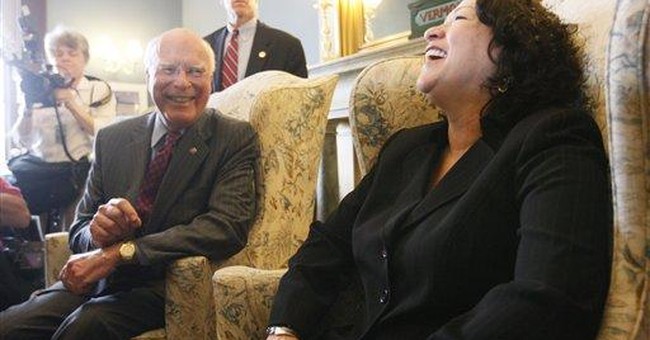 Judges should never show special "empathy" for the downtrodden and unfortunate. To do so not only undermines the integrity of the legal system, but goes against Biblical morality. How do we know? Because the Hebrew Scriptures are explicit and unequivocal on this issue, as I explained in a column a month ago.

The controversy over the Sotomayor nomination gives that column fresh (and, if I do say so, prophetic) relevance. In fact, I suspect that in her confirmation hearings Judge Sotomayor will display the good sense to back away from some of the most controversial recent statements that she has made (especially regarding the superior "wisdom" of Latinas) as well as clarifying, or rejecting, the implications of some of the President's statements suggesting that the scales of equal justice should be tilted in the direction of recognized "victim" groups, based upon a history of suffering rather than the validity of their legal arguments. Even Americans with no specific background in the legal system can understand that Lady Justice must remain blind, not biased.

Obama Should Listen to Leviticus: Don't Confuse Justice and Charity

The core mistake of liberalism involves the confusion of charity and justice.

How do we know it’s a disastrous error to blur the distinction between these two timeless virtues?

Because the Bible specifically warns us against it.

Last Saturday, Jewish people around the world read Leviticus 19:15 as part of the weekly “Torah Portion” – the specific segment of the Five Books of Moses assigned since ancient times for synagogue recitation on this particular Sabbath of the calendar.

The text declares (in the best modern translation): “You shall not commit a perversion of justice; you shall not favor the poor and you shall not honor the great; with righteousness shall you judge your fellow.”

The unmistakable commandment to avoid favoring the poor comes as something of a shock: doesn’t the Bible, and especially the New Testament, repeatedly remind us to deal generously with the less fortunate, and to care for widows, orphans and paupers in general?

The truth is that the Bible – both Old and New Testament—views compassion as a personal obligation rather than a public priority for governmental or judicial policy. The all important warning against tilting the scales of justice toward the poor appears just three verses before the most famous single injunction in all of Scripture: “You shall love your neighbor as yourself.” (Leviticus, 19:18).The juxtaposition of God’s directives makes it clear that not even love for your neighbor can allow “perversion of justice.” Justice and charity must remain distinct—not just separate, but in some ways opposite polarities.

The importance of this distinction particularly concerned the great Rashi (Rabbi Shlomo Ytizchaki, 1040-1105), considered the most authoritative expositor of millennia-old oral traditions on the Biblical text. More than 900 years ago, Rashi addressed the verse in question and faced the puzzle of why the Bible forbids bias on behalf of the poor even before it forbids favoritism for the rich. “You shall not say, ‘This man is poor, and the rich man is obliged to support him,” the eminent Rabbi wrote. A judge is strictly prohibited from saying “I shall favor the poor man in this suit, and thus he will make a respectable living.” As a 20th Century rabbi (Nosson Scherman) succinctly summarized the point: “The Torah insists that justice be rendered honestly; charity may not interfere with it.”

Ironically, the Jewish world focused on this point this year in precisely the same week (the first Sabbath in May) in which President Obama faced his first opportunity to appoint a new justice to the Supreme Court of the United States. In some of his campaign comments about criteria for such an appointment, the future president specifically indicated he wanted a judge with a “heart” for the poor and downtrodden, and who would concentrate on their specific interests and needs—in other words, precisely the sort of jurist prohibited by Leviticus.

Allowing justice to be twisted by emotions of sympathy for the unfortunate is no less corrupting than bending toward the rich and powerful out of a sense of awe or admiration, or in hopes of personal advancement. In both cases, feelings block the scrupulous application of rules of logic and fairness. In both cases, Jewish tradition suggests that the judge (or any other government official) has been, in effect, bribed.

On this point, leaders of the liberal Jewish establishment would no doubt object to the whole line of scripture-based reasoning, making the point that the Hebrew word for justice – “tzedek” – is directly related to the colloquial term for charity – “tzedaka.” This linguistic point has allowed many generations of Jewish fundraisers to make the pitch that for us, charitable giving isn’t a matter of special kindness or generosity, but an obligation of simple justice. As the Book of Deuteronomy (16:20) famously and resonantly declares: “Justice, justice shalt thou pursue.”

Actually, the better translation for this celebrated phrase (“Tzedek, tzedek teerdof” in Hebrew) would be “Righteousness, righteousness you should pursue.” When the book of Leviticus bans bias toward the poor as a “perversion of justice” the word used isn’t “tzedek” (best rendered as “righteousness”) but rather “Mishpat” (best rendered as “law” or “judgment”). Righteousness constitutes a personal goal for each individual – and very much includes charitable giving, and acts of loving-kindness for the impoverished and powerless. “Law” (or “judgment”) on the other hand describes an expression of organized society or governmental authority, which should treat all society’s members, rich and poor alike, in a non-prejudicial and neutral manner.

This distinction between personal obligations and official policy brings important implications for current controversies. As individuals, we should never try to look on Bill Gates and a homeless beggar as equally deserving of our sympathy or generosity. At the same time, twisting the law or administrative policy to favor the beggar in a dispute with Bill Gates would require the same abandonment of impartiality as privileging the Software Sultan over the pauper.

Does this mean that a system of progressive taxation constitutes the blurring of justice and charity that the Bible decries? The answer is almost certainly yes, and helps explain why so many conservatives yearn for a system of flat taxes or consumption taxes to replace the current nightmare of the IRS. This doesn’t mean that Mr. Gates would ever pay the same tax bill as our imaginary homeless gent--- if they both paid 10%, Mr. Microsoft would still pay vastly more in precisely the same ratio that he earned vastly more. But a system under which top earners get slammed with a 39.6% rate (as they will if Obama lets Bush tax cuts lapse, as promised) and struggling householders pay nothing, but actually get checks from the government totaling thousands of dollars (through the Earned Income Tax Credit and other scams), very clearly represents a society organized to favor the poor in a way that violates unbiased justice.

At a time when the outspoken religious left wants to claim scriptural sanction for its redistributionist schemes, when President Obama searches for a judge who will follow her compassionate heart rather than the Constitution, it’s appropriate to recall the timeless and necessary Biblical separation between public justice and private compassion.