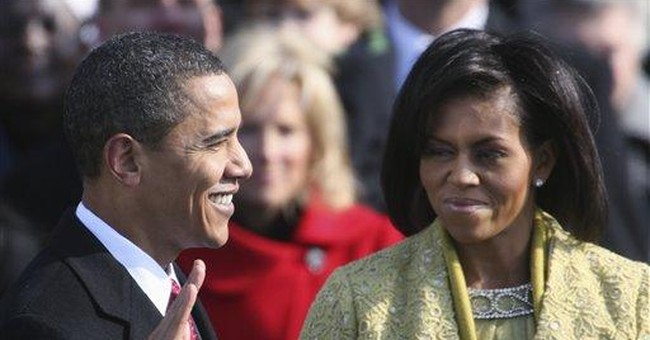 WASHINGTON -- Reviewing inaugural speeches is a tricky business. Immediate impressions can be spot on. Of President John Kennedy's address, John Steinbeck commented, "Syntax, my lad. It has been restored to the highest place in the republic." Other judgments have been, well, hasty. The New York Herald called President Lincoln's second inaugural "a little speech of 'glittering generalities' used only to fill in the program."

Given President Barack Obama's background, his inaugural address would have been a memorable event even if every word had been a Flag Day platitude. Unfortunately, too many of his words were platitudes.

To be sure, Obama has a presence and confidence that completely filled America's main rhetorical stage -- extraordinary for a man who just six years ago was giving floor speeches in the Illinois Legislature. His arguments were sophisticated and politically ambitious. But the speech itself was -- amazingly, inexplicably -- uneven in its quality.

There were high points. "Our security," Obama said, "emanates from the justness of our cause, the force of our example, the tempering qualities of humility and restraint." That sentence has a spare elevation -- a natural rhythm when read aloud. The speech contained hints of John Kennedy in its assertion that "the nation cannot prosper long when it favors only the prosperous." And Obama made effective but unobtrusive use of religious references, speaking of "still waters" and setting aside "childish things."

But the first literary goal of an inaugural address is to express familiar American ideals without resorting to distracting cliches. And Obama generally failed this test. There were too many "rising tides" and "gathering clouds" and "raging storms" and "nagging fears" and "dark chapters" and "watchful eyes" and "dying campfires" and "icy currents." Wages had to be "decent," and markets "spin out of control." It is simply mysterious how such tired language could sound appropriate to the ear of Obama the writer. Some phrases were just strange. Recriminations have "strangled" our politics, as in some "CSI" episode. We have "tasted the bitter swill of civil war and segregation." Yuck, in so many ways.

In content, Obama's speech was more compelling. His vivid assurances of toughness on national security were genuinely reassuring. When is the last time we heard a national Democrat admit that "our nation is at war" and promise to "defeat" American enemies? His discussion of the role of government was more sophisticated than in any inaugural since Ronald Reagan's in 1981 -- though his post-partisan appeal more resembled Bill Clinton's Third Way than Reagan's firm assertion of limited government.

And Obama's main argument -- for a "new era of responsibility" -- was traditional without being tired. From the beginning, Americans have displayed a unique combination of revolutionary idealism and moral conservatism. American presidents have generally asserted that the achievement of radical or progressive ideals such as unity and social justice requires a return to timeless American values such as responsibility and self-restraint, charity and the end of malice. Woodrow Wilson, for example, argued, "there has been something crude and heartless and unfeeling in our haste to succeed and be great. Our thought has been, 'Let every man look out for himself. ... '" But the answer, he continued, would be found in restoring "the standards we so proudly set up at the beginning and have always carried at our hearts."

Similarly, Obama's address diagnosed a time of "standing pat, of protecting narrow interests." And he rooted his vision of social and economic restoration in the renewal of moral virtues -- courage, honesty, fair play, loyalty, tolerance, patriotism and duty. He insisted on using the word "virtue" and explained that such convictions are not merely useful but "true."

This shows a deep understanding of America, which remains moral to its core -- and a mature understanding of American leadership. Obama's argument should appeal to many conservatives, who would never accept a case for progressive policies based on relativistic or libertarian moral views. Like Lincoln or Martin Luther King, Obama positioned himself as a conservative revolutionary -- attempting to re-create our country by reasserting the traditional moral principles that gave it birth.

This type of insight makes President Obama a formidable political figure -- and if he really believes and defends these ideals, perhaps a formidable American leader.

Heading into this inaugural address, many expected the speech to be rhetorically masterful, but perhaps ideologically shallow. Instead, we heard a speech that was rhetorically flat and substantively interesting. On his first day in office, President Obama has managed to surprise.