Science Magazine and the WHO Promote Pandemic Panic 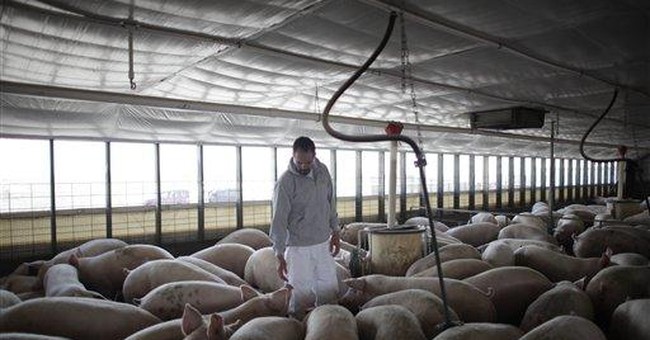 Although the “worried well” are still swamping emergency rooms, our pig flu is appearing to be a piglet. But a study in Science magazine claims the outbreak portends a pandemic and the media have gone hog wild over it. “Swine Flu Is as Severe as 1957 Pandemic,” blared a typical headline about the outbreak that killed 1-3 million people worldwide and 70,000 Americans.

Actually reading the study and its accompanying citations – rather than just the summary and press release, as most reporters do – shows that despite its the spin, it actually supports other data showing both that swine flu is less contagious and far less severe than ordinary seasonal flu.

Disease contagiousness is measured by its "basic reproductive rate," or the expected number of secondary infections from one person in a wholly susceptible population. The lower the rate, the less catchy the germ. Three different analyses in the Science article found rates of 1.4 to 1.6 based on epidemiological evidence, while when based on a genetic analysis of the virus showed a rate of 1.2.

After calculating a Mexico City rate of 1.5,  essentially the same as the Science writers found, the director of Mexico’s National Center for Epidemiology and Disease Control told the Washington Post it’s “fairly low,” and “good news."

But the Science paper, prepared under the auspices of the World Health Organization (WHO) – the planet’s chief Chicken Little – essentially says it’s bad news because the rate is  “substantially higher” than that of seasonal flu.

Of the two citations the paper provides, one is by the lead author of the piece itself; the other finds a seasonal flu reproductive rate of 1.73 – above the findings for swine flu.

The Science authors also claim the swine flu reproductive rates they found “are comparable with but perhaps on the low end” of those from previous pandemics, which they says ranges from 1.4 to 2.

The paper has three citations in support of its “comparable” claim, again with one by the lead author. Of the remainder, one states that estimates “for pandemic influenza vary widely, ranging from 1.68 to 20.” Yes, most definitely the low end!

Swine flu is also dramatically milder than the seasonal variety. The widely-used estimate for the U.S. seasonal flu death rate is one per one thousand infections (0.1%) or 100 per 100,000 infections. Fewer than ten Americans have succumbed to swine flu. Yet according to the Centers for Disease Control and Prevention, there have probably been more than 100,000 infections.

Could something happen to change what we're seeing?

Evolution favors mutations that make a virus less harmful; it’s better to adapt to a host than to kill it. Furthermore, swine flu is no more likely to undergo such an evolution than the numerous seasonal flu strains that go around each year.

What of warnings of a winter "second wave?" That's "when influenza viruses usually thrive," the WHO's Fukuda says. But "thrive" refers only to contagiousness; cold has no impact on severity. We certainly could see many more infections down the road, but they'll be just as mild as current ones meaning that other than in testing laboratories we won’t even know swine flu is circulating.

It's understandable that the WHO would be feeling a bit embarrassed over its squawking since 2003 over avian flu. That virus, which the group's "flu czar" David Nabarro once said threatened to kill as many as 150 million people, has steadfastly refused to go pandemic. According to a 2007 amino acid sequencing study, it's light years away in evolutionary terms from the ability to do so.

So perhaps the organization figures that with enough bottles of Wite-Out it can just reuse all those pandemic documents by replacing "avian" with "swine."

Or perhaps sensing the public has had enough, the media will finally say "show me the beef!" Er, uh, make that "bacon."