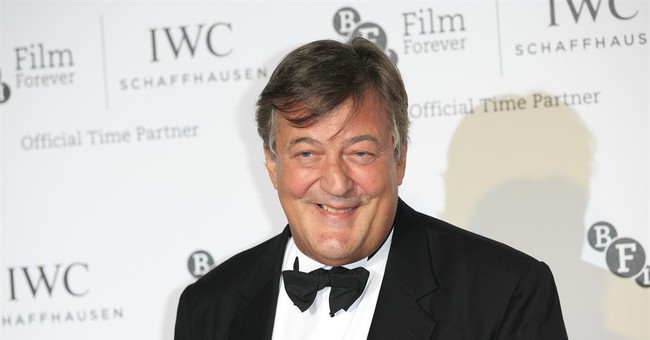 Outspoken British atheist Stephen Fry was recently asked what he would say to God if such a being really existed and he encountered him/her/it after death. His reply was passionate, eloquent, defiant, and irreverent. I wonder what God might say to him.

How would the Creator respond to being characterized by a mere mortal as “utterly evil . . . capricious, mean-minded, stupid” and “monstrous,” among other choice descriptions?

The first error made by Fry was assuming he would be able to speak at all in God’s presence, having no idea that he would suddenly encounter perfect purity, unimaginable love, absolute goodness, untainted justice, blazing truth, unadulterated light.

In a moment, he would be overwhelmed by his own sinfulness – not so much as an atheist but as a human being – his selfishness, his arrogance, his carnality, his hypocrisy.

Rather than rebuking God he would be reproaching himself, wailing aloud, “I am so very, very sorry for who I am and what I have done. Could you possibly have mercy on a wretch like me?”

But what of the substance of his remarks? What if he could have his say with God? How would the Lord respond?

Fry was outraged that an allegedly loving and compassionate God could allow such terrible suffering among his creation, stating that he would say to the deity, “bone cancer in children, what’s that about? How dare you create a world where there is such misery that’s not our fault? It’s utterly, utterly evil.”

God might say to him, “I applaud you for your moral indignation. In fact, you got it straight from me. If you were simply the result of a freak, unguided evolutionary accident and your brain waves were just the result of neurons firing, you would have no more moral indignation than a zebra being eaten alive by lions or a fly being devoured by a spider.

“The very fact that you care and that you know that such suffering is not right is a reflection of my image in you. But in reality, you don’t know the half of it. I am in constant pain because of the suffering of my creation. The cries and agony are in my ears day and night.”

As explained by the German Christian leader Basilea Schlink, “Anyone who loves as much as God does, cannot help suffering. And anyone who really loves God will sense that He is suffering.”

The Lord might also say, “There’s something else you’re missing. Your own race commits the most horrific, barbaric atrocities day and night – willfully and with premeditation – from burning people alive in a cage to raping little children, from kidnapping and torturing innocent victims to blowing up hundreds of people at a time.

Of course, Fry had his guns fully loaded, stating that he would say to God, “Why should I respect a capricious, mean-minded, stupid god who creates a world which is so full of injustice and pain?”

The Creator might reply, “What you fail to understand is that for me to create a world inhabited by free moral agents involves the possibility of evil and great suffering, and it is the freedom of the human race that has produced the agony of the human race.”

“But,” Fry would surely protest, “bone cancer in children is surely not their fault. Natural disasters that wipe out thousands in a moment of time are surely not our fault.”

Or, to quote his exact words, “Yes the world is very splendid, but it also has in it insects whose whole life cycle is to burrow into the eyes of children and make them blind....”

In response, the Lord might say, “Doesn’t it seem contradictory to you that I could make such an incredible universe and world, filled with such beauty and splendor and majesty, with human beings standing as the pinnacle of my creation, crafted with precision and skill beyond all mortal calculation, and yet a world filled with those deadly insects you mentioned? Did you ever wonder about that?

“It is human sin that has polluted this world and I am in the process of turning this terrible evil into something incredibly good. And although this completely transcends your understanding – remember that what you don’t know is infinitely greater than what you do know – it will be worth it all in the end.”

To this God might say, “Does anyone force you to look at beauty? Does anyone require you to appreciate good? I call on my creation to worship me to remind them of who I am and who they are – after all, it is my prerogative as Creator – but in doing so, as they gaze on me and recognize my holy qualities, they are raised up in character and attitude and faith, becoming more and more like me, coming into the fullness of my image in them.

“Whatever I do for my glory I also do for your good, if you only recognize who I am and humble yourself before me.”

Fry claimed that, “Atheism is not just about not believing that there is a God…. It’s perfectly apparent that he is monstrous. Utterly monstrous and deserves no respect whatsoever. The moment you banish him, life becomes simpler, purer, cleaner, more worth living in my opinion.”

To the contrary, as countless millions will attest, it is the moment you truly come to know him and experience him that life takes on real meaning. And we come to know him most fully through Jesus.

Perhaps God would have ended things on that note, saying, “What you have completely overlooked is that I am not some indifferent bystander. I get involved in the pain of my creation.

“In fact, through Jesus, I entered into this world and took the place of sinners and rebels and tyrants and scoundrels and mass murderers and every other foul expression of humanity, giving my Son as a payment for your transgressions so that you, along with every other person who has ever lived, might go free and might enjoy my blessing forever.

“Are you really going to reproach me, Stephen?”

A caller to my radio show suggested that at the root of atheism was a sense of divine betrayal, as if God had somehow let the person down in their moment of greatest need, after which they concluded that he must not be there at all.

As my friend Dr. Frank Turek often says, what many atheists really feel is, “There is no God, and I hate him.”

Perhaps this is what happened to Fry as well, or perhaps, as a homosexual, he felt excluded by the church and rejected by God.

Either way, I imagine in this encounter beyond the grave that the Lord might have pinpointed the root of Fry’s atheism, at which moment he might have dissolved in tears, for the first time seeing the love of the Father.

The good news is that Stephen Fry is yet living and breathing, and where there’s life, there’s hope.

Let’s lift up a prayer on his behalf.