The Mayor of New York and His War Against The Unborn 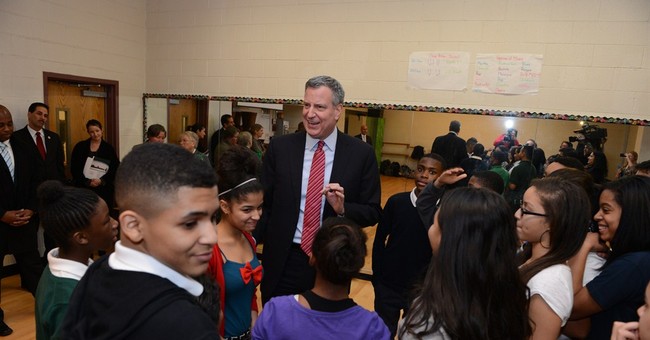 Although this is not breaking news, Mayor de Blasio’s war on the unborn remains shocking and morally reprehensible, and it is something we must continue to address.

While doing a radio interview in New York City last week, the host, Kevin McCullough, mentioned to me how the mayor has promised to work aggressively to shut down crisis pregnancy centers – not to shut down abortion clinics, or crack houses, or houses of prostitution, or gambling dens, but rather to shut down one of the few places in the city dedicated to saving life of the innocent.

Why this war against babies in the womb?

“New York City has been called ‘the abortion capital of the world.’ The city has some of the laxest restrictions and the highest abortion rate in the country, with 41 percent of its pregnancies ending in elective termination. According to New York Magazine, 10 percent of all U.S. abortions happen in the state of New York, and seven out of ten abortions in the state take place in New York City.

“But those statistics aren’t high enough for newly elected Democratic Mayor Bill de Blasio, who claims the city is ‘underserved’ by its dozens of abortion centers, and for whom increased access to abortion was a key part of his campaign platform.”

What an indictment on the voters of New York City who elected him, based, in part, on these promises.

That, however, was only part of his pledge. As noted by Dr. Susan Berry on Breitbart.com, again shortly after his election,

“Bill de Blasio, who was elected Tuesday with 73 percent of the vote, also pledged to help abortionists wipe out their main competition – pro-life crisis pregnancy centers – which he refers to as ‘sham’ clinics. These centers offer women financial and logistical assistance to either keep their babies or place them with adoptive families.”

Oh, the crime of these horrid, “sham” clinics, offering women alternatives to abortion, encouraging them to view (by ultrasound) the precious life within their wombs before terminating their pregnancies, and offering them “financial and logistical assistance to either keep their babies or place them with adoptive families.”

What would motivate someone to oppose crisis pregnancy centers? And why would he declare war on clinics devoted to preserving life and providing help to women to bring new life into the world? How much radical feminism must he embrace – and much more – to stake out this position?

Why not declare war on Kermit Gosnell-type abortion clinics? Surely, in the abortion capital of America, there must be many safety violations – aside, of course, from the guaranteed threat to the safety of the baby in the womb. Where is the mayor’s concern about this?

Instead, Red Alert Politics opined that for de Blasio, “solidifying the city’s reputation for lax abortion regulations is top priority.”

Mr. de Blasio’s actions have been considered so outrageous – even for a mayor of New York City – that he inspired headlines like this: “Mad Marxist Butcher Bill de Blasio Vows To Close NYC Crisis Pregnancy Centers.”

And then there was this headline, posted January 3rd, in the Daily Caller, “‘Horses count; babies don’t’ in de Blasio’s New York City.”

The mayor stated, “We are going to get rid of horse carriages, period,” he said at a news conference Monday [December 30th], according to CNN. He added that he believes the tourist attraction — popular since 1858 — is inhumane and dangerous.”

Yes, horse carriages are inhumane and dangerous, but abortion clinics are not.

Although I have no statistics on the horse carriage industry in Manhattan, my family and I have enjoyed them a number of times over the years, and, with my wife and our two daughters being horse lovers, I was never made aware of any abusive treatment of the horses, nor do I recall reading about a large number of injuries or fatalities because of crashes with these horse carriages.

In contrast, one can only begin to imagine how many women have been emotionally or physically scarred for life after having abortions in one of the city many clinics (God alone knows their reasons for the abortions and I’m not claiming that they made easy choices; in many cases, they are victims as well), not to mention how many botched abortions there have been, not to mention the hundreds of thousands of successful abortions.

But horse carriages are inhumane and dangerous?

And in the midst of this madness there is a place in the city where preborn babies are cherished, where women are encouraged to recognize the miracle of life in their wombs and the preciousness of that little girl or boy in its early formative stages, and where standing up for the unborn (as opposed to killing the unborn) is anything but big business.

Yet it against these beacons of light that Mayor de Blasio has declared war. What an outrage and what a shame.

Checkmate, Chuck: Lindsey Graham Has Some Sour News for Schumer On His Impeachment Plan
Redstate
Robert Hyde: I was climbing volcanoes in Ecuador when I sent those texts about surveilling Yovanovitch to Lev Parnas
Hotair