The Rabbi and the Duck Hunter 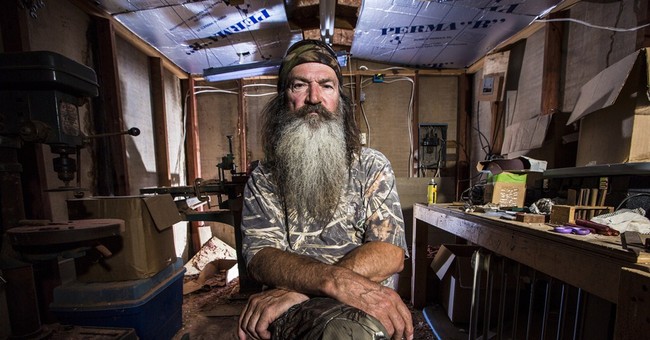 In the aftermath of the allegedly “homophobic” comments made by Duck Dynasty’s Phil Robertson, the man known as “America’s most famous rabbi” has offered a dissenting opinion. Between the rabbi and the duck hunter, who got it right?

Rabbi Shmuley Boteach, dubbed “America’s most famous rabbi” by Newsweek magazine, is a close personal friend of mine and a frequent debating opponent on theological and social issues. It is his opinion that evangelicals in America have overstated their case against homosexuality, making it the scapegoat for many of our greatest social ills as well as exaggerating its sinfulness in the eyes of God.

As for it being called an “abomination” in the Torah, Rabbi Shmuley notes that the word “appears approximately 122 times in the Hebrew Bible, including eating nonkosher food (Deuteronomy 14:3) . . . and bringing a blemished sacrifice on God’s altar (Deuteronomy 17:1).”

He also notes that the word “abomination” can refer to moral sins like “envy, lying and gossip” in Proverbs, while in the New Testament the equivalent terms “seems to be implying that love of money is an abomination, which might give some of the televangelists flying in G5s pause before going after gays.”

Is there anything controversial in what he has written here in terms of the meaning of the word “abomination” in the Bible? Not to my mind, based on studying these texts for decades myself.

But his next claim is certainly controversial (and it is one that he and I have previously debated at length). He writes, “I am an orthodox Rabbi, and I freely acknowledge that the Bible clearly labels homosexuality a sin. However, it is not a moral sin but rather akin to the prohibition of lighting fire on the Sabbath or eating bread on Passover. It may violate the divine will, but there is nothing immoral about it.”

Homosexual practice is “not a moral sin”? Really?

He further explains that, “The essence of an ethical violation, as opposed to a religious infraction, is injury to an innocent party. This is not the case with two unattached adults entering a consensual relationship that is not based on deception or lies.”

Rabbi Shmuley has espoused this position for many years now, and it is an opinion that has been strongly renounced by other Orthodox rabbis and academics.

More importantly, it seems clear that the Torah itself is against his views, since: 1) Out of all the sins listed in the book of Leviticus, only homosexual practice is singled out as an abomination (sometimes among an aggregate list of abominations) and, as such, it is the only “abomination” punishable by death in Leviticus (see Lev 18:22; 20:13). Can the seriousness of this under ancient Israelite law be trivialized?

2) According to the Torah, when the surrounding nations engaged in this sin (along with sins of incest, adultery, bestiality, and sacrificing their children to idols) they incurred God’s wrath and were driven out of the land (see Lev 18:1-30). If these were not moral sins in God’s sight, why would he punish pagan nations for them? Only Israel was held accountable for ritual laws like abstaining from unclean foods.

3) It is the Torah which placed homosexual practice (not same-sex attractions but male-male sex) next to bestiality (see Lev 18:22-23), meaning that Rabbi Shmuley’s greater argument is with his own sacred Torah (which I believe he truly reveres), despite his protestation that, “Hardly a week goes by without some religious guy in America blathering on about how homosexuality is like bestiality.”

As for Phil Robertson’s comments, while crudely expressed, it seems that he was not likening homosexual practice to bestiality any more than he was likening heterosexual promiscuity to bestiality. He was, it appears, simply stating that once you violate God’s norms for marriage and sexuality, virtually anything goes. (To cite his now famous words, “Start with homosexual behavior, and just morph out from there—bestiality, sleeping around with this woman and that woman and that woman and those men.”)

And from a biblical standpoint, a man and a woman (not just two people) are uniquely suited for each other (see Gen 2:18-25, where the woman derives her name by being taken “out of the man,” and so their relationship truly reunites them as “one flesh”). This is why the one and only paradigm for marriage in the Bible is male-female based. It is also why the violation of that paradigm is so grave in God’s sight.

As for making homosexuality the scapegoat of our social and marital ills today, Rabbi Shmuley is certainly correct in pointing out the many sins that have plagued evangelical Christians (and others) for decades now, including rampant no-fault divorce, pornography, materialism and greed.

But what he fails to realize is that the reason we have made such an issue about homosexuality is not because of the act itself but rather because of the pervasive gay activism that came knocking at our doors – in our children’s schools, in our places of business, in the courts, in politics, in the media, in our communities, and even in our congregations – to the point that we can say without exaggeration that gay activism has become the principle threat to our freedoms of religions, speech, and conscience. (For more on this, see my 700 page study A Queer Thing Happened to America.)

And so, despite Rabbi Shmuley’s brilliance and his often astute cultural analyses, when it comes to the seriousness of homosexual practice, the learned and eloquent rabbi got it wrong and the duck hunter (not lacking in shrewdness himself) got it right.